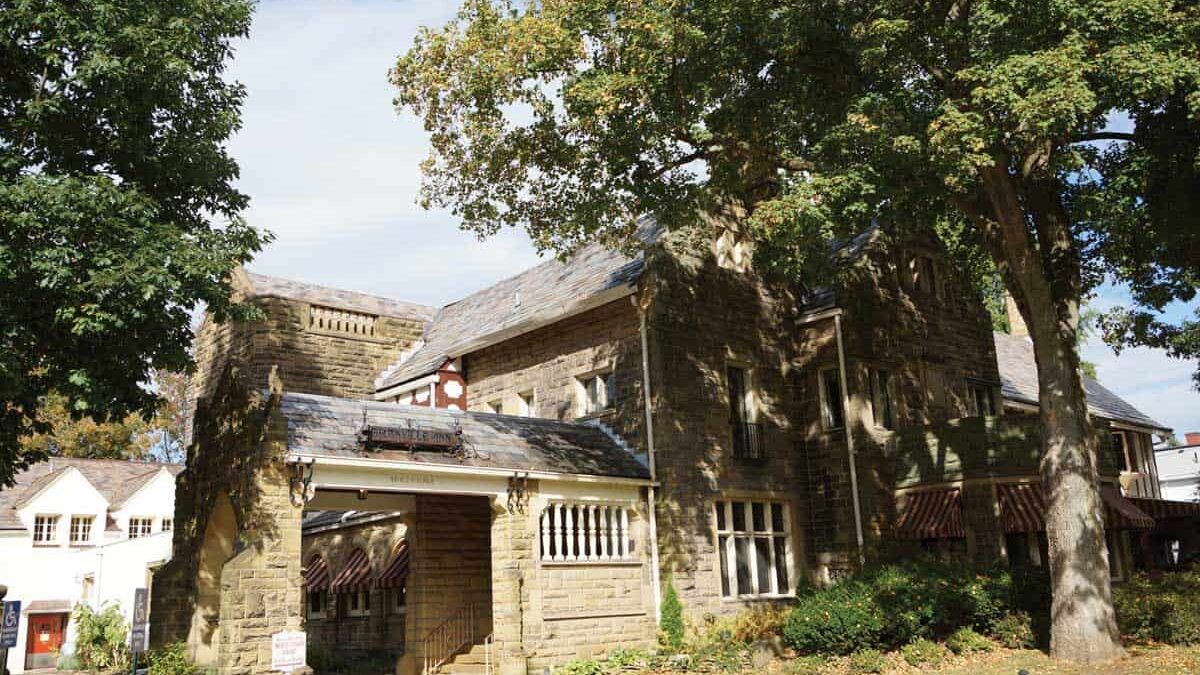 “The Inn is going to be in good hands,” says Dena McKinley, general manager of the Granville Inn. “This is what should have happened a long time ago.”

The college and Granville share a greatly linked history, she adds, believing the college will be the best entity to restore the Inn to its glory days and maintain its operations.

In 1923, John Sutphin Jones, owner and commissioner of several of Granville’s most historic sites, including the Bryn Du Mansion and the Granville golf course, commissioned the construction of the Granville Inn. It was based on the Jacobethan Revival style of the Granville Female College, which had been closed 25 years earlier. Since then, the property has changed hands for three times.

“It is the close interrelatedness of Granville and Denison,” says Seth Patton, vice president for finance and management at Denison, explaining Denison’s decision to acquire ownership of the Granville Inn.

“The Granville Inn’s facilities and functions are vital both to the village and to the college,” says Patton. “We feel fortunate to be able to act on this opportunity to invest in our remarkable community and in this iconic property.” He adds, “We believe it is important for the continued health of the village and surrounding area to keep the Inn viable. Not only is it a significant local employer, but its services are important to Granville’s downtown and to Denison visitors as well.”

The Inn will remain on the village tax rolls and its use “will fundamentally remain the same,” says Patton.

According to Patton, the decision was not expected as recently as of Tuesday, Sept. 17, but has been “under serious consideration by the college’s Board of Trustees for nearly 18 months.”

The 88-year-old Inn currently is in receivership under the Licking County courts and includes the properties at 304, 314 and 348 East Broadway.

Denison, as the holder of a back-up contract, is in the process of transitioning ownership of the Inn after the primary contract holder, the Columbus-based Urban Restorations, chose to back out.

“As recently as Monday, we remained in discussions with Urban Restorations on ways we could be supportive of their planned ownership of the facility. In the final analysis they decided to back away from the project,” said Patton in an email.

The college is prepared to invest the resources that will be required to maintain and rehabilitate the historic facility. “During our research process, we came to understand the significant investment that will be needed to preserve and update the Inn, and we are ready for that,” said Patton.

McKinley explains the current staff may or may not stay, since Denison will be contracting with another hospitality management company.

“The goal is to enhance the Granville Inn, making it a vital and successful business. Weighed against all others, there may be more attractive investment opportunities from a purely financial perspective, but few that are more important to Granville and Denison,” said Patton.

One of the Granville Inn’s largest guest populations include Denison alumni, parents, faculty and staff, according to McKinley. Patton believe the investment will “reestablish the original grandeur to the Granville Inn, providing a very positive experience for students, faculty, alumni and guests of the college right within the Village.”

The investment will not put any pressure on students’ tuition, according to Patton. “It is unlikely that it will be so profitable… but our goal is for it to be self-sustaining… and generate a minimal amount of profit,” he says.