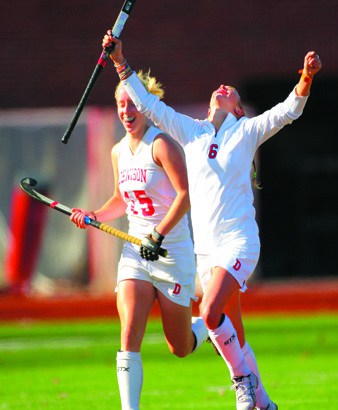 This is part two of the Fall Preview Series of Denison Athletics.

Yet, no one on the team seems really all that surprised as this win seems like a continuation of Denison’s perennially dominant Field Hockey programs.

For instance, last year, after winning a NCAC championship the year before, Denison excelled to an impressive 15-6 season in which they won 10 out of 14 conference games.

In fact, Denison was so stout that they had a chance for back-to-back tournament championship wins against DePauw only to lose in a nailbiter to end the season in a somewhat disappointing manner.

But, this year, just like with every other year, a championship is on the horizon. And with new acting head coach Nikki Wimsatt, who will serve as a one-year replacement for her sister, head coach P.J. Soteriades, things seem to be moving and shaking towards that direction.

Shaking-wise, Victor Brady, a four-year assistant student coach at Swarthmore college, has been brought in to handle assistant coach duties for the season upcoming. His role will mostly focus on recruiting, video analysis and goalkeepers.

Since these are both coaches’ first years on Denison’s staff, many athletes will be relying on older players for veteran leadership.

And one thing that every great team needs, no matter where or what sport, are valuable seniors, and Denison has those in spades.

Among the seven impressive seniors this year, one Karla Dixon was named first-team All-Region, All-NCAC and was named to the Capital One Academic All-District At-Large team for District 7 of NCAA Division III last year in addition to starting in and playing 20 games. So yes, she has an impressive resume. However, she is not the only one with some impressive numbers and awards.

For instance, Katie McMahon, who yesterday assisted fellow senior Alex B. Berman for the game-winning shot in overtime versus Ohio Wesleyan, is a stud offensively.

Last season, the senior forward started all 21 games for the mighty Big Red ladies and was named first-team All-region and first-team All-NCAC. In one particular game last year Katie racked up a “NCAC player of the week” award by scoring six shots off of only 13 goals.

The next game should be a tough non-conference test vs. Johns Hopkins, on Sept. 7th. Yet, Denison will try to carry an early undefeated record to Maryland.

Look for the Big Red battling at home on Sept. 25, where they will take on conference foe and embattled rival Wooster at 4:30 p.m. in a decisive conference game.