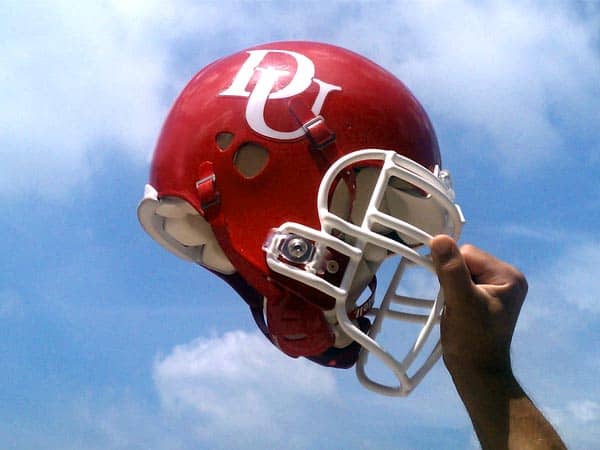 This is part one of the Fall Preview Series of Denison Athletics.

For many people, the start of an academic year is exciting, but not in the head-stuck-in-the-books kind of way.

No, in fact, for many people (including the author of this article), the academic year is most exciting because of college football.

And with an experienced squad full of starting seniors, Denison’s college football team seems to be poised for good things this year.

After posting a 4-6 record last year, including a few disheartening losses to Conference rivals Ohio Wesleyan and Wittenburg, Coach Hatem and company decided to add some new additions and make some changes to the coaching staff such as fourth-year assistant-coach-turned-offensive-coordinator Austin Holter.

Holter is well known for developing legendary quarterback Max Paulus ’13, who broke a multitude of records over the course of his colorful career Denison. He hopes to do the same with many other offensive players now that he is the offense coordinator.

“I’m incredibly excited to coach this group,” Holter says in an interview with The Denison Sports Network, “[Our preparation] really started in the spring, our seniors left us in December. We started our spring workouts, we had our practices and the guys did a great job really learning and developing into our offense.”

This is a little bit of a change of pace for the team as, Jack Hatem, fourth year head coach, will not be heading up the offense this year, instead leaving the rains up  to Holter.

“Austin completely deserves the promotion,” Hatem says also in an interview with The Denison Sports Network, “When we started, in 2010, it was my offense and now it’s ours.”

The first football game is this Saturday, Sept. 7th at 7 p.m. in Granville, OH vs. Earlham College.