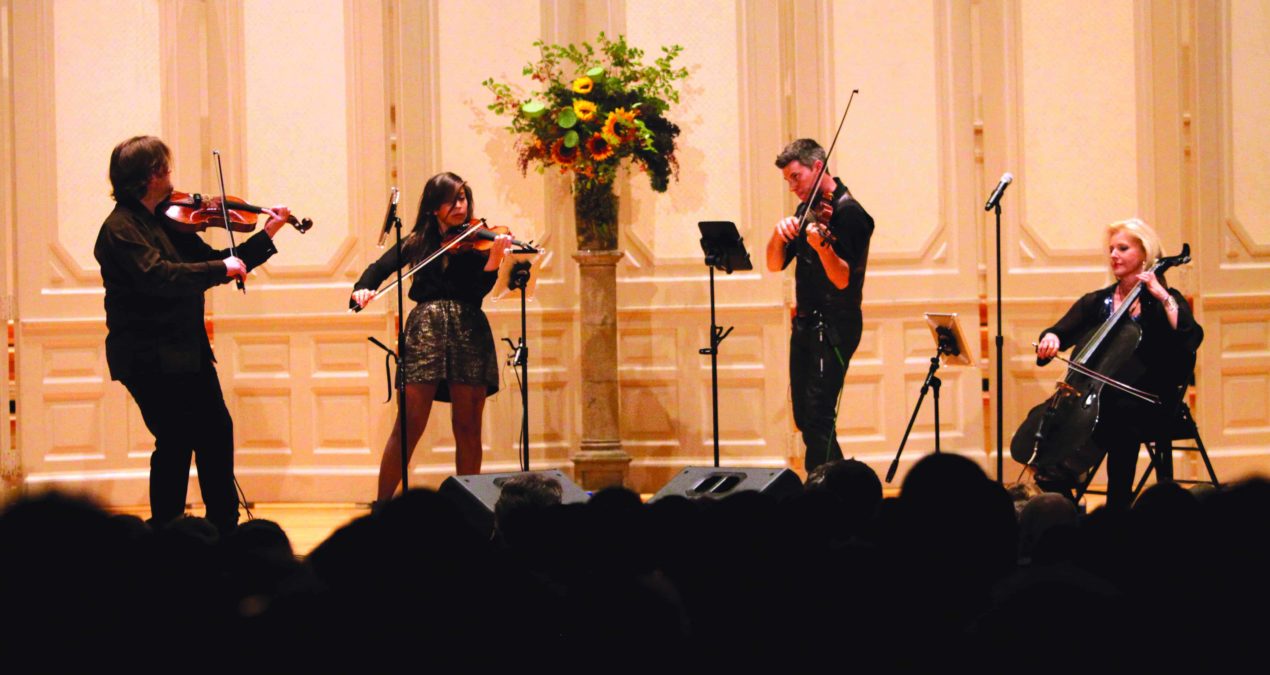 Two violins, a viola, and a cello? With these instruments in tow, Ethel, a New York-based string quartet, took center stage in Swasey Chapel for the first Vail Series performance of the semester this past Friday, Sept. 27th.
The four musicians – founding members, viola player Ralph Farris and cellist Dorothy Lawson, with violinists Kip Jones and Tema Watstein – gave a rousing performance, filling the performance space to capacity, and receiving standing ovations after their original performances and final curtain call.
The theme of their performance was centered around the idea of “grace,” described as an ability to interpret the music with an open mind, accepting the discordant, yet harmonious sounds of the four uniquely trained musicians. Ethel strove to explain these common themes throughout their Vail series performance, using each musicians’ distinguished style to play renditions of classic rock pieces alongside original compositions arranged by the members.
In an interview with the performers before their concert, this cohesiveness on the stage was a topic of much discussion, described eloquently by founding member Dorothy Lawson, “I think there is a nice thing to observe about music and collaboration in music. You literally experience ‘allowing the differences’. You don’t have to homogenize down to one decision. You can actually reach ways of respecting each other’s perspectives while still standing together and having an effective voice, a shared voice.”
But playing instruments together on a stage is an experience unto its own. Violinist Kip Jones commented, “The stage is a place of ceremony. When we are on stage there is something different happening. Whoever we are is blown as wide open as we can blow it open, and other people are invited to take part in the things that make us who we are and make us do the things we do.”
Consistently throughout their performance, the quartet played songs that were unexpected. “We play music that we own. It is ours. We have complete ownership of it. We are standing up on stage, and we know exactly what we are trying to express. It just feels like this is what we are supposed to be doing,” founding member Ralph Ferris said. Their variations on classic rock pieces included classical components, and, to the delight of the audience, their modern sounds seamlessly mixed the old and the new.
Notably, the performance’s finale was a song written by the members of Ethel. Laced with various cultural and musical influences – mainly that of Native American styles of music – the piece featured whistling by the violinist Kip Jones and thunderous stomping towards the end of the song, maintaining the classical and folk foundations throughout.
Ethel premiers its first collaborative project, Documerica, a documentary on “America’s relationship to our land, our resources, and ourselves,” later this week.