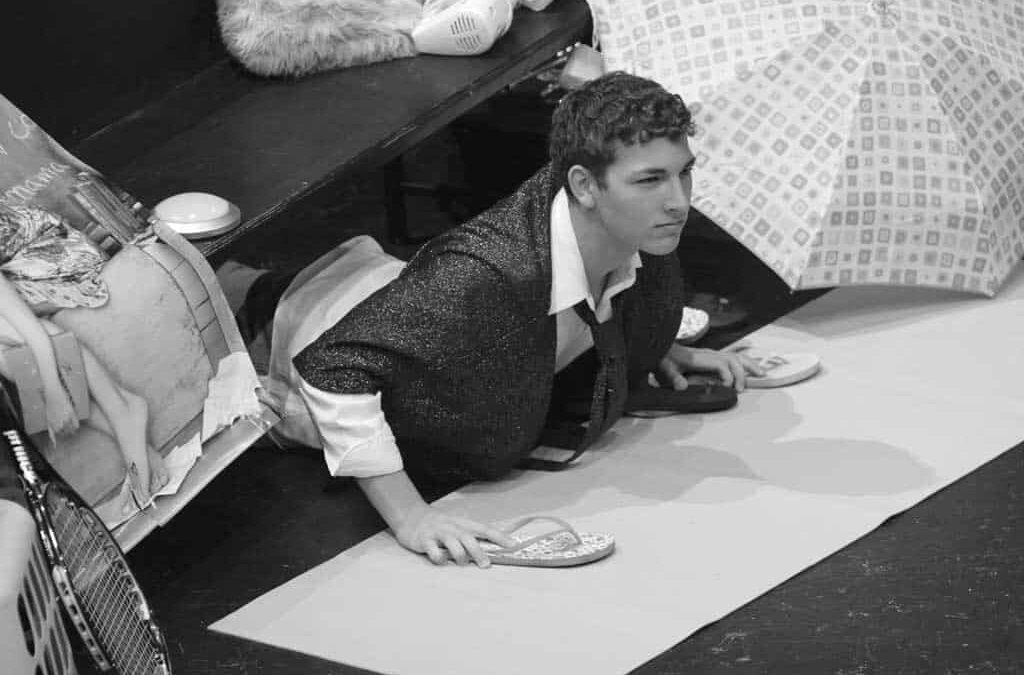 Saturday night, the stage was set for a solid evening. Crowds pushed latecomers in Burke’s Black Box Theatre to the scaffolds, although President Weinberg managed a center-stage seat. I daresay neither he nor this reviewer were disappointed by what followed. The Denison Independent Theatre Association (DITA) pulled off one of their best one-act festivals yet. The producers did well to place the short “tail” of the festival first, concluding with six or so examples of truly well-written, well-directed, and well-acted theatre.

Undoubtedly the first piece, Helene Griffin’s “Jack & Alice,” was the least impressive of the plays. A garbled script had trouble making sense of itself until halfway through the story, and there were several times when Ryan Vagedes’s lines failed to make their way to my ears, exacerbating my confusion. While the cutesy boy-meets-girl revelation toward the end had its oomph — particularly the clever appearance of blue handprints on Vagedes’s chest — this rom-com was quickly overshadowed.

Leona Vander Molen’s “The Deer” was a classic iteration of a common trope at the One-Acts: namely, the Denison satire. I was reminded immediately of “The Fairy God-bro” of fall 2012. We once again saw Will Blount cast in the role of the faux-hyper-masculine “false wit,” harkening to “The Young and the Raptors” of past spring. I applaud Vander Molen’s central anthropomorphic ploy, which was well-received by the audience, although heavy-handed commentary on men in the guise of criticism of Blount’s Chuck and on the inane libertinism of the female human passers-by limited the scope of the parody.

Laura Wilson’s “Siobhan” followed, which detailed a husband and wife of six years parting ways after Mike Herman’s Michael reveals an affair with a potato. While Wilson’s script drew a few laughs, the piece’s reliance on absurdity over wit relegated it to just that.

Curtis Edmonds’s “The Best Man” was the first truly strong play of the night. Directed by Sam Heyman, who wrote and played in the thematically similar “The Closet Door” two years ago, strong performances by Aaron Robertson, Jonathan Halper, and Julie Hoagland-Sorensen delivered the emotional power of the script very well. Halper in particular shined as the masculine, rational, no-nonsense Allen, serving as excellent contrast to the emotional Chris. The play’s premise of a gay man in love with his straight best friend who just got engaged to his girlfriend can resonate with anyone who’s been the victim of unrequited love, or simply lost a friend to romance. The theatrical excellence kept going with YaMaya Pugh’s “The Woman On The Floor,” which like a Christopher Nolan film started with a complex premise accentuated by a shocking twist. But the jewel of this performance really was Ray Marolt as the sassy Mel, whose snarky one-liners brought the house to applause several times. Marolt’s comedic value was, I argue, unequaled until Jeremy Hollis’s Ted in the final skit. The debate between reality and hallucination in the play was left brilliantly unanswered, and the accomplishment of simultaneous portrayal of different perspectives onstage was well-directed by Laura Wilson.

Tina Benardi’s “Fiction Protection Agency,” though a little lengthy, was a welcome aperitif after two fairly weighty courses. Casey Sully’s Steve, especially with his nonsensical interjections of “Baah!,” was well-received. It was difficult to believe from a plot standpoint, however, that the 500-year-old Dr. Eames would pass on the helm of a fantastical strike force to the overly immature Ron after a 10-minute brouhaha.

The similarly-themed “Red,” by Meghan Callahan, was a good example of a well-conceived idea inadequately expressed. Drawing on the mythos of European fairy tales, most prominently Little Red Riding-hood, the play seemed to be on the verge of serving as a metaphor for a cyclic, abusive relationship. The analogy was lost in translation, though, by overly vague dialogue and bizarre “eating” and screaming segments.

Phoebe Thatcher’s “Joy & Maxine” presented a sort of class conflict between the ritzy Joy and the plebeian Maxine. A highlight here was newcomer Becca Plank’s excellent performance as Maxine; Plank’s return to the stage is much-anticipated. It was one of the only One Acts, interestingly, to pass the Bechdel test.

“A Creation Myth,” Benardi’s second script to make the cut this semester, parodied the Genesis story of mankind’s origins as a botched crafts project by the hungover archangels Gabriel and Michael. Though theologically dubious, I appreciated this humorous take on an age-old story. The friendly tension between Rhiannon White’s Gabriel and Hunter Janness’s Michael was well-acted, as was Kevin Ralph’s semi-robotic Adam.

The festival concluded with probably the funniest piece of the festival, Helene Griffin’s “LARP.” Each player did well in their role here, although a special kudos should go out to Jeremy Hollis, whose portrayal of angsty nerd Ted was simply superb. Though the piece could’ve gone lighter on the feminist drivel, its use of a classic comic double-narrative formula stood out above its fellows. The interaction between two separate but almost indiscernible storylines — Lyla and Calix’s “serious” quest to grapple with Lyla’s unseen boyfriend, and Ted and Ellie’s “comic” romance — was quite clever.

Ultimately this semester’s One-Acts were a very strong showing, assuredly outdoing the “roller-coaster ride” that was the spring production. I was happy to see a better balance between dramas and comedies, as well as a focus on a real instead of the fantastical. Some pieces, like “The Woman On the Floor,” even managed to straddle all these categories. DITA, like the audience, should be very pleased.

Bringing art beyond the walls of Bryant