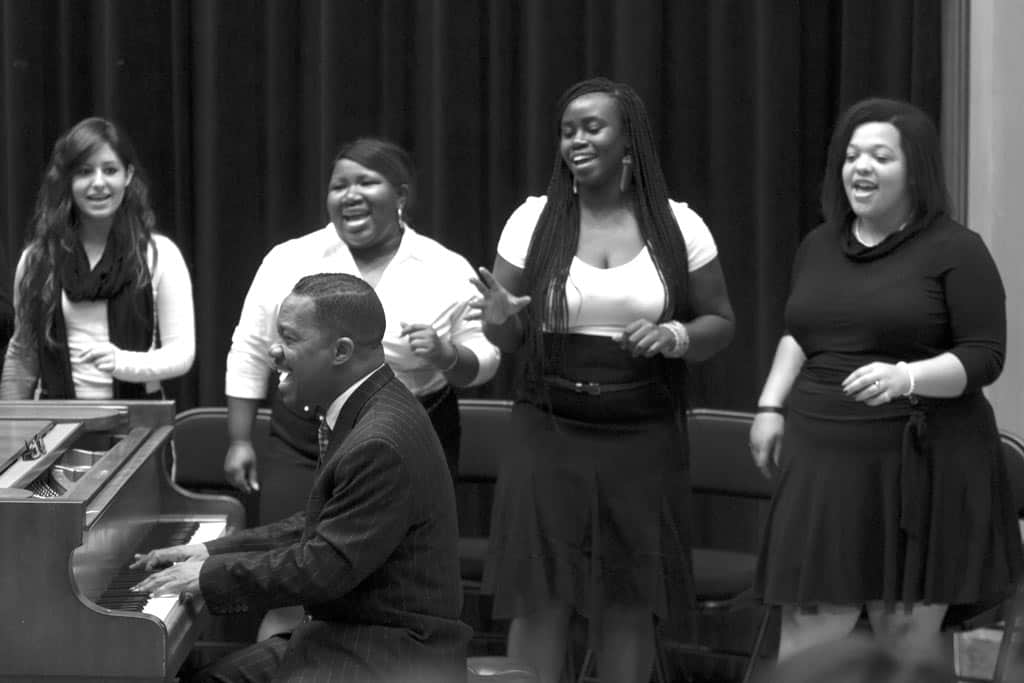 Rev. Dr. Raymond Wise ‘83 deserved more attention than he got last Thursday at noon when he delivered an informative, moving, and entertaining recital-lecture to a sparsely populated Herrick Hall. The topic of the talk was a history of Gospel music, and all of Wise’s main points were accentuated by pieces from Tehillah.

Wise began the lecture by telling the audience his own Denison story, although, as a young black man from the inner city, he was by no means the average “Denidoo-er” in the mid-80s. Raised in Baltimore, Md. in the household of his father C. Dexter Wise, a minister and musician himself, the young Wise began singing at age three as part of his family’s group, the Wise Singers. The Singers released their first record when Wise was only fifteen years old and their first album when he was seventeen years old.

Though Wise originally wanted to pursue a career in anaesthesiology, he eventually accepted his calling to become a musician and arrived at Denison in 1979 specifically to study music. At the time, he was one of only 57 black students on a campus of 2,200, although Wise found this more a challenge to overcome than a setback. “If you have the motivation and the courage,” he said, “you can do anything at Denison.” He was involved in the Black Student Union and was a founding member of several ensembles focused on traditionally African-American art forms while on the Hill.

After leaving Granville with a B.F.A., Wise left for Vienna, Austria to study opera, art, and German at the Institute for European Studies. He would also study African-American history, music, and dance at San Francisco State University in California before returning to the Columbus area to earn an M.A. in Music Education from Ohio State University. He earned his Ph.D. in Music Education from Ohio State as well.

Wise’s dream was to make it possible for students to learn African-American music in an academic setting as on par with other musical traditions, as he had felt growing up that black art forms were often regarded as inferior to classical European forms. To this end, he developed a four-credit Gospel choir course at OSU in 1999, doing the same at Denison in 2000. Today he teaches at the African-American Arts Institute at Indiana University in Bloomington, Ind.

After the autobiographical piece, Wise moved into discussing the historical development of Gospel music. He said that, fundamentally, all African-American art must be regarded as a compromise between ancient African traditions and European art forms; in his words, “adoption and adaptation.” He conducted Tehillah in a rendition of “Dana Se,” a Ghanaian folk song, to allow the audience to hear what precolonial African music may have sounded like.

Wise stressed the importance of slavery in shaping the early development of black American music. At first, African slaves would sing their traditional songs while working. These songs would often contain coded messages as well. As slaves began converting to Christianity, the folk religion of these songs was replaced by Christian elements; hence, the Negro spiritual was born. Wise calls the spiritual the “first authentic American art form.” To demonstrate, Wise and Tehillah sang “I Open My Mouth unto the Lord.”

After emancipation, black art faced the choice of returning to African forms or imitating European culture. Wise here laid out what he considered to be the driving mechanism behind the development of African-American music. The mechanism starts with the arrival of a new style within the black church, which is almost immediately rejected as too secular. This style then succeeds enormously in the secular market, and is thereafter adopted by churches as well, with some modifications. Most musical genres considered to be “American,” Wise said, including the blues, jazz, rock, vaudeville, and the Broadway musical, grew out of religious, black American musical forms. At this point Wise invited Tehillah to sing “This is the Day that the Lord has made.”

The lecture concluded with “Hallowed be Thy Name” by Tehillah and Wise outlining the five main eras of Gospel music according to his dissertation thesis: the Congregational, Traditional, Contemporary, Word School and Urban Crossover eras.

The mixed nature of the lecture made it one of the most interesting I have had the pleasure of attending at Denison thus far. Wise’s story as an alumnus and his clever use of Tehillah to “show, not tell” the story of Gospel music to his audience stood out as memorable features. I was disappointed to see less than 30 people in attendance, however, the majority of whom were involved with the performance in some way (i.e., Tehillah members). Denison tries to pride itself on its respect for diversity, but the scene in Herrick on Thursday seems, in retrospect, more like something from the Denison Wise knew then out of the idyll we try to sell to prospectives today.