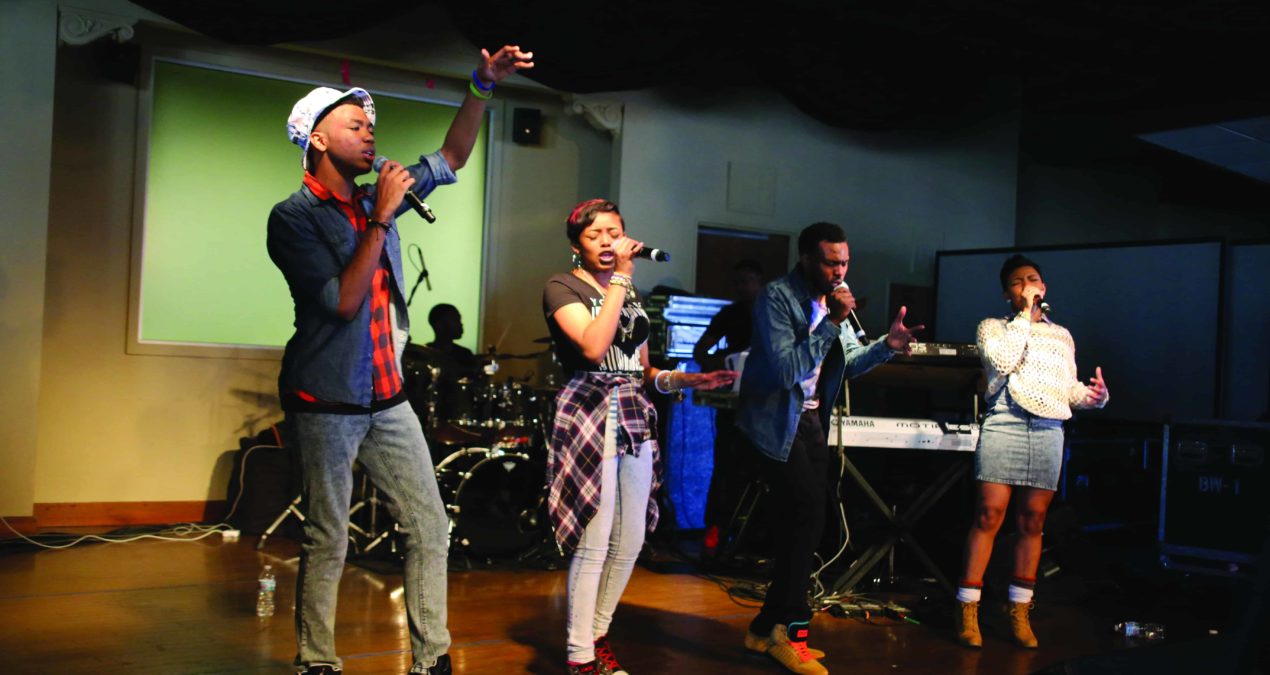 Powerful music and uplifted arms filled the Roost during the performance of The Walls Group at the Gospel Fest on March 30. At the beginning of the concert, only a few seats were empty, but those who attended did not stay seated for long, as the audience quickly rose to their feet to dance, sway, and sing.

The audience ranged in age from young children standing on chairs to their parents holding their swinging hands and all in between, including President Adam Weinberg.

After a few mic checks, the concert began with the Walls Group’s strong voices. From that first song, the Gospel Fest quickly became an interactive experience. These four sibling singers, native to Houson, Texas, asked the audience to meet each other, and without hesitation strangers began to hug and shake hands, marking the communal experience of gospel music.

After this initial introduction to the talent of the Walls Group, the crowd took part in a shared prayer and psalm. Imani Abernathy ’16, of Chicago, Ill., opened with a strong solo, singing, “I Won’t Complain.” After this passionate number, the Denison a capella group Tehillah sang “Total Praise.”

Tehillah member Vanessa Gibson ’17, of Pickerington, Ohio, expresses, “We were all kind of nervous, but we felt we had enough practice and that we would do well opening.”

As a psychology major and music minor, Gibson has had a love of gospel music for some time, and enjoys listening to the Walls Group’s CDs. However, she believes, “they were even better live, and just on a CD you don’t get the interaction and all of the praise and worship.”

Agreeing with Gibson, Gospel fan Hunter Janness ’17 from Troy, Mich., says, “The thing I love about gospel music is that it is an interactive experience. Everyone is part of an experience, and you contribute just as much as the performers.” Janness believes that one does not have to be Christian to enjoy the music: “Even if you’re of any faith, gospel music just provides this power.”

The audience clearly felt the power of the Walls Group that Sunday afternoon. After the opening acts, the family began their praising performance, inviting members of the audience up to sing and dance.

The goal of the performers obviously was to show the audience a good time through their music and faith. The music became a conversation between the singers and the audience. Each song and voice echoed with emotion and power, ranging from gentility to energetic glorification.

Gospel novice Eileen Baer ‘16 of Wilmette, Ill., shares her first experience with the music: “I thought it was amazing, and I was stunned by the group’s power to engage and energize the audience.” Baer encourages Denison students to “attend more events that they wouldn’t normally go to so they can see what other students are involved in, and enjoy themselves like I did at the concert!”

Theatre department to bring archives to life on the stage