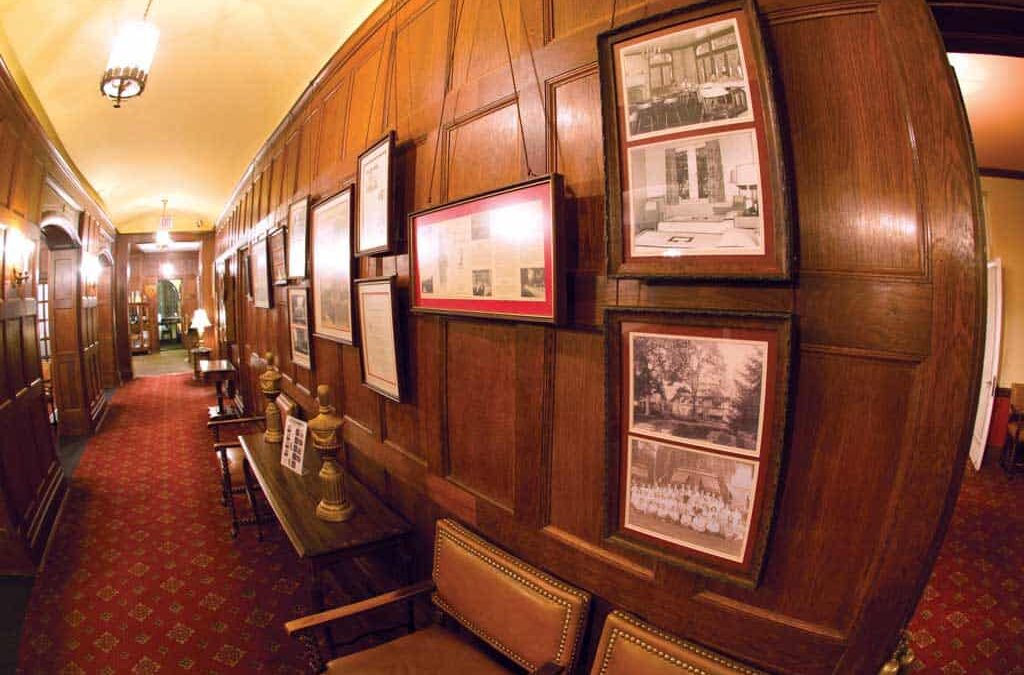 By Bridget Diana and Erin Worden

In the early 1920s, John Sutphin Jones made a deal with the Granville community: if it acquired a sewage system, electric lights and a water plant for the town, he would build a grand hotel.

The history of the Inn and Denison University, less than a mile up the hill, have always been “inexplicably intertwined,” according to Dena McKinley, the current General Manager of the Granville Inn.

According to McKinley, Jones hired well-known architect Frank Packard to build the Inn on the property that Jones acquired. The land was formerly owned by the Granville Female Academy, which closed in 1898. Jones’ wife, who attended the Female Academy, convinced her husband to preserve part of the original structure that currently houses some guest rooms, the garages and the wine shop.

McKinley said the 2008 economic recession “dug [the Inn] into a very deep hole” that “compounded financial problems that were already in place” before business began to recover from a “very low point” in 2010. Public record shows that the Inn was behind on its mortgage, and the bank filed for receivership, a court order that appoints an outside authority — a receiver — to oversee operations when financial obligations are not met.

This is where Denison eventually stepped in.

Denison University President Adam Weinberg admitted “important conclusions” were already reached by the time he arrived on campus this past July. He said Denison had planned on letting another entity purchase the Inn if they would keep it at the quality “Granville deserves.”

The other company seriously considering purchasing the Inn was a Columbus-based firm called Urban Restorations.

Denison “wanted [Urban Restorations] to be successful” in purchasing the Inn, according to Vice President of Finance and Management Seth Patton, because of its past of successfully renovating historical properties. “Our initial thought was that we’d love to have someone like Urban Restorations buy it and restore it. That would have been ideal,” he said.

“We weren’t seeking that as an investment opportunity, but it came our way,” Patton said.

When the purchase is finalized in about a week, Patton said the university will be the fourth owner of the Inn — the original owners, the Kent family, the investment group and now the University. Though he could not disclose Denison’s offer, Patton did say the University’s bid was “not as good” as Urban Restoration’s $1.3 million.

Jessica Hankes ‘17, an aspiring physics major from Minneapolis, Minn., admits she’s “not terribly concerned” with financial aspects of the purchase. Hankes said she feels comfortable enough with the University’s decision to not be worried about the Inn’s financial impact.

Weinberg said the Inn purchase is not intended to “be a drain on Denison resources.”

To accomplish this, he said Denison will “most likely hire a management company that has expertise in running inns of [comparable] size.”

Patton echoed Weinberg’s statement adding that the University has interviewed “three or four” potential management companies. Patton said Denison is “pretty close to making a decision on that,” anticipating that it should be confirmed in less than two months.

He said “the [management company] we’re talking most seriously to [has a vision] that is not all that dissimilar than when Bon Appetit changed from Sodexo” concerning the status of current employees.

The process, according to Patton, typically entails the new company interviewing all of the current employees and “[hiring] most of the people they want to continue.” He said management employees normally don’t stay because of different visions for the operation.

McKinley said that “the Inn [currently] employs between 60 and 70 people,” most whom are part-time restaurant staff who comprise a “pretty good cross-section of people” from throughout Licking County.
Regarding retaining the Inn’s current employees, Patton said, “Obviously, their employment is important to them, and we want them to be treated well.”

“We care just from the standpoint that these are local people,” he said.

Weinberg and Patton agree that the Inn will be as a self-sufficient business, and thus will not diminish resources available to the students or faculty.

“What it will do is increase social opportunities for students and increase what are important revenue streams for the college, both in terms of admissions but also in terms of alumni engagement,” Weinberg said. “We are not taking money away from current resources to do that.”

Patton said the purchase of the Inn “shouldn’t have any bearing on” student tuition and costs. “We are taking a risk just like anybody who starts a business; we are not going into it with a game plan on losing money,” he continued.

All parties agree that significant capital investment is required to bring the building “back to prime condition,” as McKinley said.

“The Inn has really suffered from many, many years of deferred maintenance,” McKinley said, hoping Denison will maintain the Inn in the way “it should have been maintained all along.”

The Kent family, a Granville clan whose patriarch is a Dension alumnus, bought the Inn and “lovingly restored it in the 70s, which was really the last time a significant amount of money was [invested] in the building,” she added.

Chief Investment Officer Adele Gorrilla said, “It’s an old beautiful building and it’s time for some of these things to be replaced.”

She said, “We recognize that it needs substantial work,” noting that a “bad stay” can “affect the way you feel about Denison…and the reputation of the school.”  She added, “If you’re used to staying in a modern hotel, it feels very different.”

Gorrilla said Denison will strive to retain the original character, so hopefully it will look “remarkably similar” in the future — just “refreshed,” as Patton added.

“I think that Denison will be an excellent steward of the building,” said McKinley.

McKinley said Denison has agreed to install a much-needed elevator to making the Inn more handicap accessible, as it is currently “not really ADA compliant.”

Unlike the expense of the elevator, McKinley said the process of changing the exterior will not be a problem for Denison because the Inn is “similar to other buildings Denison has remodeled.”

Patton and Gorrilla think otherwise, as they explained that Denison does not have experience with renovating historic buildings. The administration is currently educating itself and working on bringing in properly experienced professionals to get the job done well.

Despite this potential challenge among others, Patton remains optimistic.

Jokingly, he admitted that “every time somebody gets a bad meal down there, I am afraid somebody’s is going to start calling me. That’s the biggest problem.”

While Weinberg recognizes the challenges that Denison may face in renovating the inn, he looks forward to the Inn’s future impact on Denison students.

Weinberg said he hopes the Inn strengthen the Admissions experience and alumni networking that enable students to interact with Denison in “important ways.”

In addition, Weinberg said he hopes the Inn will be a unique social space that he feels Denisonians crave; he said that the “Inn could provide a really nice venue for students.”

He wants to the endeavors to achieve this to be “student-led and student-driven to ensure the entrepreneurial part of our culture.” He added, “I think we can think about really creative ways that students might want to use those spaces for social life and other things they want to do.”

Hankes said Weinberg’s vision for student involvement in the Inn “sounds like a good idea.” She added, “I could see myself going there. We need more stuff to do on campus.”

“When the community needs us to step up and do something that benefits both Denison and the community, we do so. It says something nice about the way Denison thinks about its relationship to the community — the way we take seriously our civic connection to the community [and] moral responsibility as a large organization in town to make sure that the whole community stays strong,” Weinberg said.

Maria Theresa Barney Professor of Philosophy Anthony Lisska, who counts the history of Granville among his intellectual interests, said he thinks the village appreciates Denison’s willingness to step up: “The people I know in Granville are just as excited as can be about Denison owning the Granville Inn because it has some sense of permanence now,” Lisska said. “There was some talk out there on the streets that someone was going to buy the Inn and turn it into an old age home,” he added.

McKinley confirms that this sense of permanence benefits the community.

She said, “From an architectural and historic perspective, [Denison’s purchase] ensures the future of the Inn, and I think that’s really critical. I don’t think there’s another group or individual who could really say that.”

Beyond historical permanence, Hankes said that the purchase of the Inn will hopefully encourage a healthier relationship between Denison and the community. She said, “It feels like there’s a rift between what students are doing and [what] the town wants from students.” Hankes said she hopes the purchase of the Inn will begin to mend this “rift” by promoting more regular, positive interactions with Granville residents.

In addition, Patton said the Inn purchase was a means of supporting the Granville Schools through tax revenue, given the limited number of large commercial, taxable properties. He said, “One of the early calls I received was from the Superintendent of [Granville] Schools wanting to know whether this was going to become a non-profit. We assured him it was not; we’ll pay property taxes just like any other business.”

Weinberg remarked, “I think when it’s all said and done, students will find that the Inn will do two significant things for them. One is it could provide a destination place for students, who are looking for a meal, looking to do things on the weekends, looking to host a social gathering,” said Weinberg. “I think the other is — and I think we tend to forget this —  the healthier the Inn is, the healthier downtown Granville is…. If we can dress it up a little bit, it’ll be a destination place for all types of people to come to Granville and spend their weekend, and help populate our restaurants and businesses,” he added.

Patton said, “As long as we’re taking care of it, [Granville is] going to be pleased.”