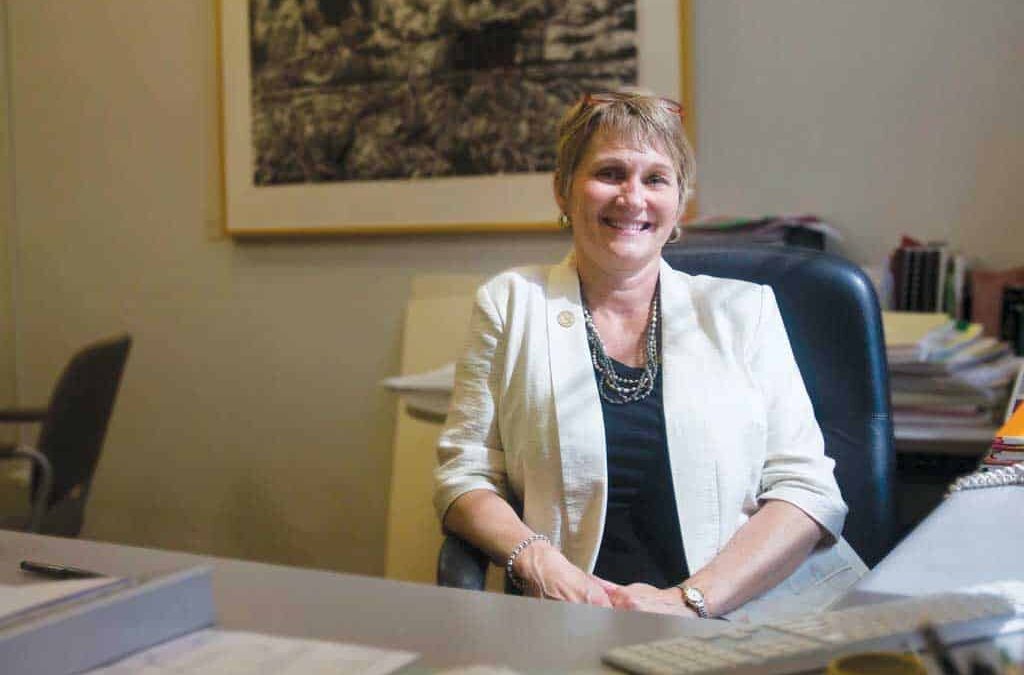 Denison’s administration underwent a true vernal renewal last spring with the retirement of longtime President Dale T. Knobel and the departure of Provost Bradley Bateman, leading to important changes in the leadership of the college’s executive and academic branches.

Associate Professor of Physics Kim Coplin’s new role as provost is, perhaps, second only to the ascendancy of Adam Weinberg. Coplin, an alumna (class of ‘85), spoke to The Denisonian about her time on the Hill, her scientific research, and family life.

Coplin grew up in a small town in eastern Ohio near Akron. “Only about a quarter of my high school classmates went on to college,” she says. “Most people went to a two-year college or to the University of Akron.”

Via a scholarship from a local foundation, which stipulated that she attend a liberal arts college, Coplin’s options opened up. “I kind of restarted my college search in May of my senior year,” when she received the scholarship, she says. She applied and was accepted to Denison, inducted in 1981.

Nonetheless, she says, “I was not the typical Denison student… I’m not sure I had the typical student experience.”

At the time, Greek life was at a historic high, which was a campus element Coplin did not participate in.

“I struggled to fit in socially,” she says, “because being part of the fraternity and sorority life wasn’t anything that I knew about from my background… [I]t was foreign to me… and that was very much a dominant part of the social culture.”

In contrast were her professors. “What really got me through my early years at Denison,” Coplin says, “were the relationships that I was able to develop with a number of faculty members.”

She tells the story of a handwritten note from Dr. David Woodyard she received alongside her grades at the end of fall semester her freshman year. “That just said to me that, gosh, there’s someone at Denison who noticed me, who’s paid attention to me,” she says. She would go on to meet her husband Rick, a member of Kappa Sigma, at Denison, although the two did not meet through the Greek system.

Coplin received her B.A. in 1985; she would go on to study for an M.A. at Johns Hopkins University and for her doctorate at Ohio State University.

She returned to Denison in 1993 as a professor in the physics department.

Before her administrative work, Coplin was engaged with research in the field of polymer physics, in which she did her graduate work.

In her work she looked at novel electroconductive plastics. Although “you could think of all kinds of applications” for such materials, Coplin herself uses the example of an ultra-lightweight plastic airplane that can nonetheless conduct atmospheric electricity to prevent injury to passengers and crew. Her research focused specifically on the optical properties of these polymers.

Her research interests at Denison later shifted toward the physics of anatomical movements such as dancing and athletics, motivated at first by Melanie Lott, a fellow Denison alumna now professing in the physics department.

This research asked the question of “how does physics describe differently the motion of a ballet dancer doing a jump called a grand jeté with the motion of a hurdler trying to get over a hurdle? On a surface level, they’re very similar.” Coplin would go on to research dance and athletics from a physics perspective, especially as a means to “engage students to use physics to study things they’re familiar with.”

Coplin began working in an administrative capacity under David Anderson, who preceded Bateman as provost. Coplin served as the chair of the physics department under Anderson and also sat on the Presidential Advisory Board.

When Anderson left Denison to assume presidency of his alma mater, St. Olaf College in Northfield, Minn., in 2006, Coplin began tenure under Bateman as associate provost. It was Bateman’s departure last spring to assume the presidency of Randolph College in Lynchburg, Va. that saw Coplin’s installation in her current role, initially as interim though later extended by President Weinberg.

Coplin’s undergraduate experience on the Hill has helped define her views on the role of intellectualism and academics at Denison. “We have to think very carefully right now about… providing multiple ways for students to find their community,” she says. Commenting on her own time as a Denison student, she says, “I felt like I was able to connect to the community of faculty members I had in class… I didn’t find that in the fraternity and sorority system… So I think that while the fraternity and sorority system isn’t quite as dominant [now] in the first semester… we need to make sure we are providing a diversity of opportunities for students to find that community where they’re comfortable.”

“[T]here are examples where the social culture or what happens socially can have a direct impact on what happens in the classroom,” Coplin says. “It takes time away from students doing homework if students are out partying or just up late.”

Coplin explains that she and President Weinberg have undertaken an initiative to learn more about the intellectual habits of students outside the classroom.

“We need to do a better job, I think, as faculty modeling for our students how you become comfortable interacting with… people who are different,” she says. An important part of this is engaging in “topics that are going to be controversial to discuss or difficult to discuss,” which she thinks Denisonians generally already do — inside the classroom.

“But, somehow, we need to do a better job of translating that into outside the classroom,” she continues. “Classrooms at Denison are integrated spaces, but when you go outside the classroom, they’re not, and I think that says something about the academic health of this community.” She thinks that challenging students to engage critically in the Denison community and publicly displaying intellectual disagreements among faculty are two ways that professors can encourage this flowering.

“We kind of close down at five and move on to other things,” she says, “and I don’t know if that’s what we want.”

Outside of the classroom, Coplin enjoys spending time with her family. Her husband Rick is with TechColumbus as a venture development specialist, working with local startups that have a technological edge. Her eldest son Daniel, 18, is a freshman this fall at the College of Wooster. They also have 15-year-old Jacob and 10-year-old Lia, who is adopted from China. Beyond the gold-brick walls of Doane, “I’m involved in my church and I’m involved in my kids’ activities,” says Coplin. “I like to be with my family, and I watch my kids pretty much participate in everything.”

New professor discusses the meaning of religion in America