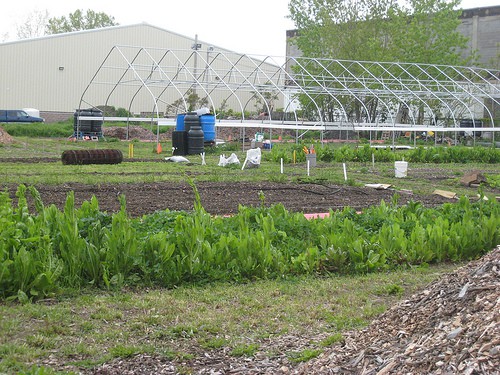 Is it possible to return to eating locally produced harvest like the majority of the American people did before the industrial agriculture revolution? This is the philosophy behind Bon Appetit’s Local Food Initiative, Farm to Fork, which works to promote the consumption of locally produced food.

Two of the program’s major goals are to increase regional biodiversity and to help the local economy. The program has myriad benefits for both the producer and consumer. Eating locally produced food not only supports the local farmers, it also enriches the community at large. The consumption of locally grown food is actually healthier for an individual. When a vegetable or fruit is picked, it loses up to two percent of its nutrients. This loss of nutrients is exacerbated when produce is crammed into a semi that travels halfway across the country to reach its location. As a result, consuming locally grown produce is likely to provide more nutrients.

The Farm to Fork program does not purchase its food from any nearby owner-operated business. It has specific standards for the selection of its providers. First, the provider has to be within 150 miles. However, it is not just about distance. The program wishes to help particularly those smaller local vendors that may be struggling. An income cap was created in order to ensure that the program was reaching out to small local vendors and lending them a helping hand. Further requirements include a commitment to buying at least 20 percent from the selected local farmers throughout the school year. This standard prevents Denison from falling into the trap of discontinuing the supply of local harvest when the harvest season ends. Farm to Fork hopes to meet and exceed this 20 percent during the growing season.

So what local owner-operated farms are part of Farm to Fork? Sarah Piper, Bon Appetit’s sustainability manager, has worked extremely hard to negotiate with many local farms that meet the standards mentioned above.

Piper pushed through barriers to include small, local Amish farms that often have a lack of necessary technology and transportation. Despite challenges, she found non-Amish partners for these Amish farms so that they could transport the produce to campus.

Uncle Tim’s Salsa, is also part of the program. Uncle Tim’s Salsa meets the requirements of being locally produced and also of having at least 50 percent local ingredients. Additionally, the milk available for purchase in Slayter is from Covered Bridge Creamery in Charm, Ohio. Milk is not the only dairy product that comes from a local producer. The yogurt sourced locally from Velvet-View Farmstead Yogurt uses the milk from their own cows to make the yogurt.

The fresh bok choy, onions, and peppers at the salad bars are from the nearby Birds Haven Farm. All of the meat is from a local farm called New Creation Farms that produces free-range pasture-raised meat.

New Creation Farms exemplifies the Farm to Fork ideology that animals should be treated humanely in a healthy environment. After a number of their children became sick, the owners of New Creation Farms were driven to raise their own animals and consume meat without pesticides and antibiotics to ensure a healthier lifestyle.

Farm to Fork is not only limited to diary, produce, and meat. The program receives a large supply of bagels from Smiling Hope Bakery. This bakery is run by a special education teacher in Newark, Ohio who teaches his students how to bake so that they can obtain jobs after graduation. Two of his students have graduated and now work at Denison’s cafeterias. Bon Appetit’s Local Food Initiative is far more than just about supporting local farmers. The Farm to Fork program is about creating a healthy community and a holistic way of life.

Denison moves to remote learning for the rest of the semester