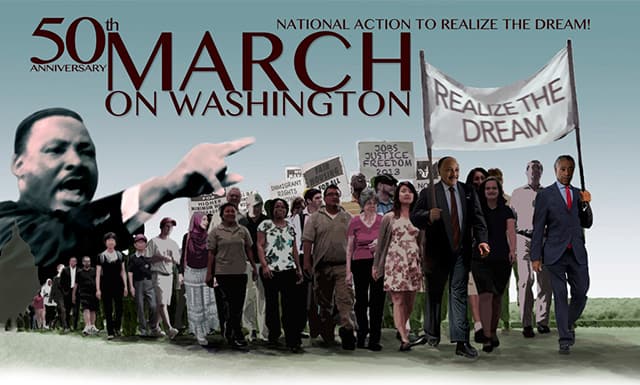 Fifty years ago, Martin Luther King Jr. delivered his “I Have a Dream Speech” in Washington DC. We all learned about it in the history books.

Hundreds of people gathered in their Sunday’s best to march in the nation’s capital to obtain the basic fundamental rights that are and were supposed to be granted to all Americans as a direct result of the Fourteenth Amendment’s due process clause; however, African-Americans during this time period continued to be denied many of these basic rights as citizens of America.

We all learned that. But on August 24, 2013, I got to march and stand in that exact spot where hundreds of Americans protested for the civil rights of African-Americans that many of us take for granted today.

Not to mention it was also my last Saturday at home for the summer. Can you see why I was a little less than thrilled?

But when I finally got out there and started marching, it finally began to hit me: fifty years ago, my ancestors walked on the same streets and stood in the same field in front of the Washington Memorial fighting for the rights that I have today.

Their biggest worry wasn’t missing their last Saturday at home before they went back to college. Their biggest worries were trying to ensure that their children would be able to attend an integrated school, sit at the same counter as a white person, and walk down the streets with their heads held high without the constant fear for their safety or their lives.

Fifty years ago, they made a difference. What upsets me about this is that, even though I am a young African-American woman, I don’t think I ever truly realized how extreme the sacrifice they made fifty years ago was— and even beyond that. I didn’t realize the fact that they risked their lives so that their children and their children’s children would be able to “live in a nation where they will not be judged by the color of their skin but by the content of their character,” as Martin Luther King Jr. so famously said on that day.

What was even more amazing was how well attended the event was by all races. As I looked around the sea of people who attended the event, I was amazed that so many different cultures and races were represented in an event that commemorated the black freedom struggle fifty years ago.

While we still have a long way to go to ensuring MLK’s dream becomes reality, we have to also stop and recognize the progress we have made in just fifty years.

Denison: The decision that changes our lives