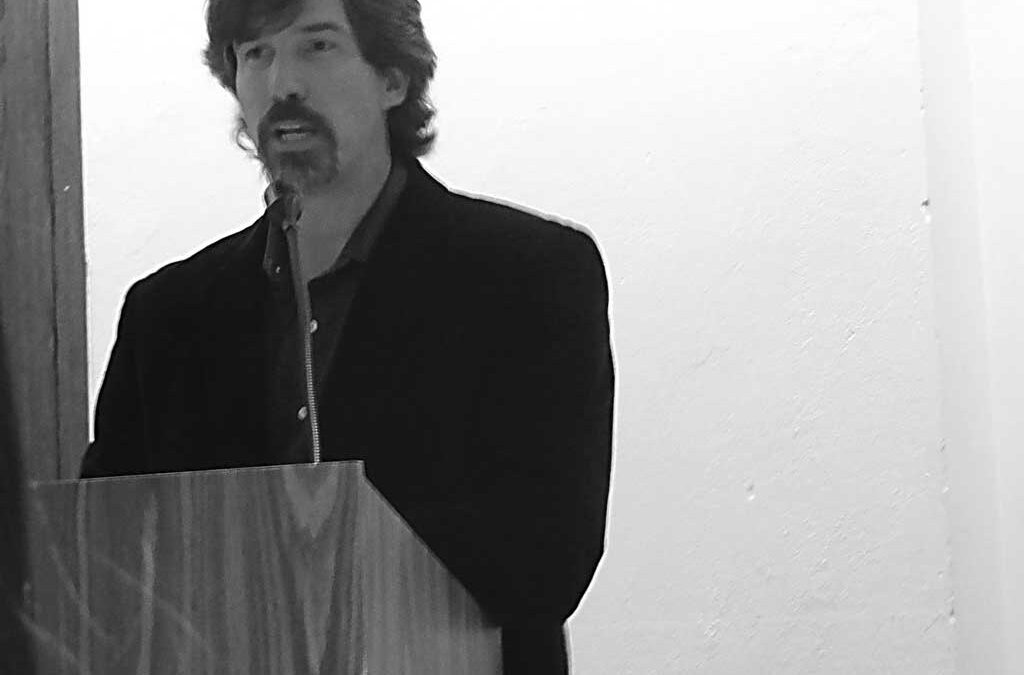 In addition to being an award-winning writer and actor, known for such roles as Officer Colicchio on “The Wire,” Benjamin Busch is also a film director and photographer.

He gave two talks as part of his Denison visit. The first was a public reading of his Great Lakes College Association award-winning memoir “Dust to Dust” about his two combat tours in Iraq at 8 p.m. on Thurs., Nov. 7.

The second talk on Fri. Nov. 8 was entitled, “The Composition of Place:  The Image as Narrative from War to Next Door” and featured Benjamin’s work in photography and film.

Peter Grandbois, Assistant Professor of English, introduced Busch as “a man consumed with war, words, and images.” In listing all of his accomplishments Grandbois concluded that Busch was “truly a Renaissance man.”

Busch began his talk by describing how he joined the Marine Corps after attending Vassar College and was the first Vassar student to enlist. He read a passage from the first chapter of his book that described how the sergeants would mock the fact that he came from a “girls school,” and, when he corrected them that it was a “women’s college” they thus nicknamed him “Women’s College.”

He read with expertly timed pauses, a theatrical aura and used different voices for various characters. His presence captivated the entire Barney Davis board room. When he read a scene where the drill sergeant asked them “What makes the grass green?” Busch yelled at the top of his lungs into the microphone, “Blood, blood, blood!” managing to scare and wake up the audience.

After forty minutes of reading, he opened it up to questions. Three students asked him about the craft of writing, and one older gentleman asked for his thoughts on the lost art of letter writing. Busch commented that, “letters are great” and he was disappointed to admit that now they are scarcely written and being replaced by e-mails.

Students appreciated how Busch was able to make his reading relevant to students.

“It was good. It was interesting. I liked how he’s thinking about us through himself,” said Danielle Golds, a junior from Hastings On Hudson, N.Y.

Gretchen Unico, a senior from Pittsburgh, Pa., found Busch to be “pretty engaging.”

“He had a lot of interesting ideas. I liked his story about being in the Marines,” she said.

The highlight of the reading that night was, without a doubt, when Busch read “he looked at me like an octopus had come out of my face.”

Stay tuned for more delightful Beck Lecturers in the spring.

Bid Day 2020: Sorority recruitment is a vibrant day for Denison

Fringe Festival closes out a year of theater