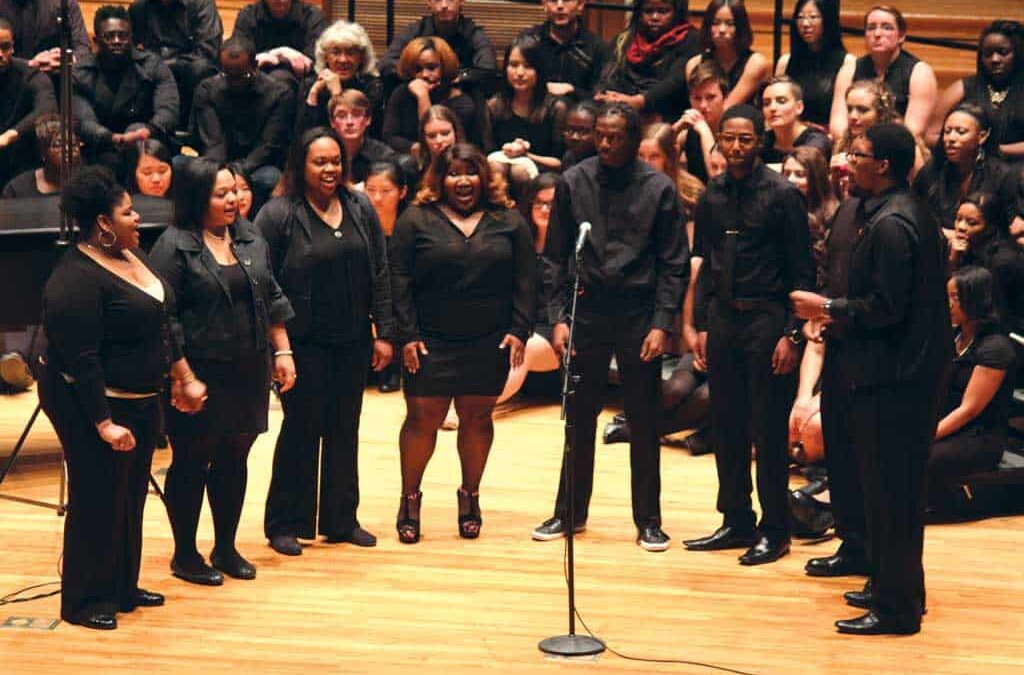 A group of Denison students dressed in sleek black attire stood on risers in Swasey Chapel. Soft light reflected off their faces, excitement gleamed in their eyes, and the positive energy in the room was palpable. Surrounding the students were four gentlemen, three playing percussion and guitar, and one seated at the piano situated in front of the students.

The choir is led by Tim Carpenter, and under his direction, this group of students performed with an incredible amount of soul and passion. They were clearly well-versed and practiced.

Imani Abernathy, a sophomore music vocal performance major, said that “[she liked] the full sound of the choir, and that [their] voices really rang through the chapel.” She also complimented them on their song choices, which she observed had a full range and “contrast in types of gospel music” performed.

The beautiful thing about gospel music is that is allows the performer’s personality to shine, and encourages participation from the audience (a style often called “Call and Response”). The Gospel Choir did both of these things. They performed songs by well known gospel artists like Kirk Franklin, and featured a Negro Spiritual called “Oh Mary, Oh Martha,” which was arranged by Mr. Carpenter himself.

Some of the most powerful performances of the evening featured solos by students. During a song called “So Wonderful,” senior Alexis Franklin performed a beautiful solo. In addition, sophomore Lita Shive was featured during “Psalm 8.”

Closer to the end of the concert, the choir performed “Imagine Me” by Kirk Franklin. A surprising part of the song included sophomore Yusuf Ahmed as the narrator. His narration included powerful symbolism that provided social commentary about the importancwe of letting go of things that burden individuals on a daily basis.

Two members of the choir stood at Ahmed’s side while he gave the narration and figuratively released pieces of paper (by throwing on the ground) that displayed words like “insecurity” and “doubt,” which are issues that individuals commonly face. This section of the performance spoke volumes, and likely resonated with most audience members.

Overall, the Gospel Choir offered a beautiful performance that left an impact on the members of our community who attended. Uniting as a community to celebrate, sing, and worship is important and helps connect individuals of various backgrounds and religious traditions.

Gospel Choir is offered as a one credit hour course through the Department of Music.