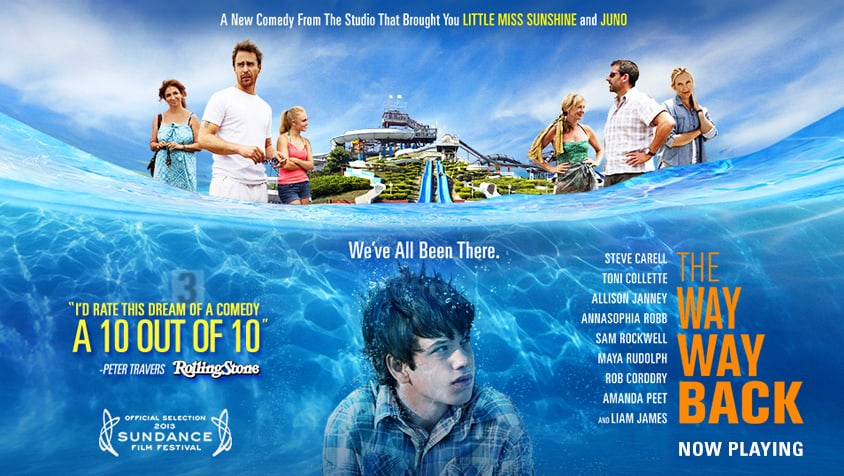 The Way Way Back

No secrets are withheld at the upstart of “The Way, Way Back.” From the opening frame, the title takes on literal form, as we see the film’s protagonist seated glumly in the third row of a station wagon, a symbol of his ostracized state. Duncan (Liam James) is a severely timid 14-year-old with a “life sucks” angst about him. His anxiety is only heightened by the fact that he is about to spend the entire summer at the beach house of his mother’s boyfriend, instead of visiting his father in San Diego.

This excursion comes at a pivotal point in the relationship between Duncan’s mother, Pam (Toni Collette), and her boyfriend, Trent (Steve Carell). On the brink of becoming one family, this trip will test the ability of the couple to work under one roof. Working against Trent is the uncomfortable tension between himself and Duncan, impressively instilled by writer-director team Nat Faxon and Jim Rash.

Duncan’s stress peaks as he buckles under the pressure of Trent’s scolding. But when Duncan finds respite in his aimless travels on a puny pink bike, he stumbles upon Water Wizz waterpark. Here he meets, Owen, the waterpark manager played with pleasant wit and precise timing by Sam Rockwell. Sensing Duncan’s distress, Owen takes him under his wing and hires him as a gofer at the park. The mentorship that Owen conducts is illustrated with charm.

The involvement of the waterpark is where the film finds its true momentum. A myriad of comedic acts emerge from the skits played out on the pool deck. Among many of the colorful Water Wizz employees is Caitlin, played with comedic excellence by Maya Rudolph. The endearing chemistry between Rudolph and Rockwell is just one example of the intriguing character interactions that “The Way, Way Back” has on display.

Worthy of mentioning is the performance by Denison alumni Steve Carell. In a role hugely deviating from his past work, Carell has shed the skin of his usual characters, like the loveable sad sacks of “Crazy, Stupid Love” and “The 40-Year-Old Virgin.” Here, he is equally as convincing, yet wearing the façade of a slimy jerk. The urge to hope for his character’s downfall is one foreign to all moviegoers.

Although the gradual development of Duncan is constructed with mature precision, at times the stories themes falter into bland and cheap territory. Connections are drawn without great care between Duncan and Owen, hinting the moments with a lifeless feel. The coming-of-age dynamic at work reads predictably, subduing the potential of the film’s messages to be absorbed.

Nonetheless, there is a subtle strength exuded from the many subplots in The Way, Way Back. Duncan’s maturity is a catalyst for the morphing relationship he has with his mother. Aware of his mother’s mistrust for Trent, Duncan shows shades of a man through his will to stand up for those close to him. The irony of this film churns pleasantly at the finale. Ultimately, the Water Wizz staff, adult misfits in the eyes of society, are the source of Duncan’s direction.

The Way, Way Back is now on iTunes and was shown by the Denison Film Society this past weekend.