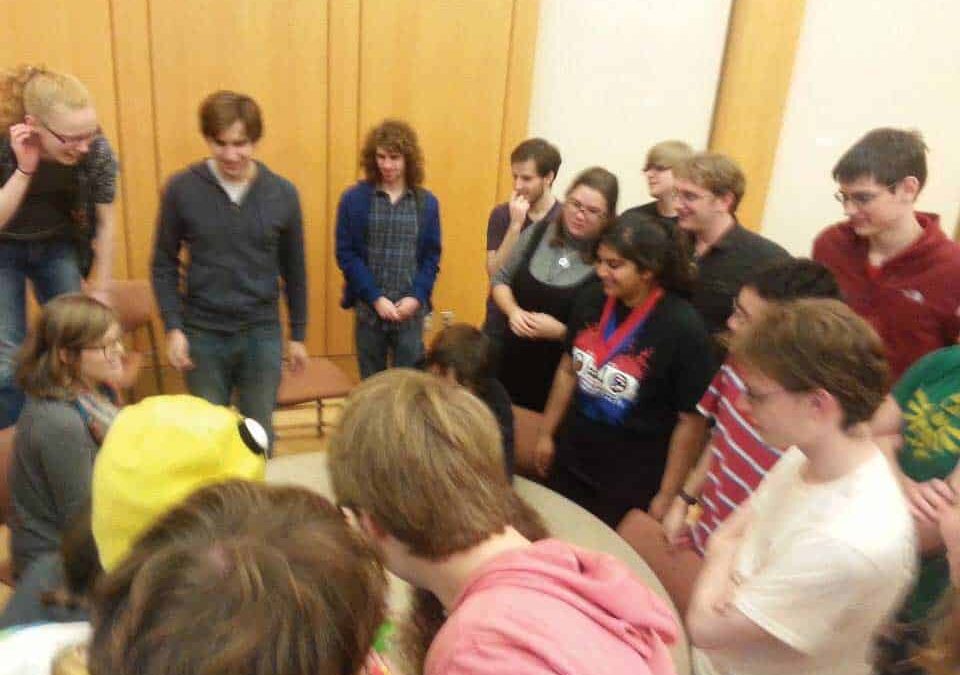 The argument made by some Denisonians that there are few to no fun things to do on campus on the weekends other than partying or drinking is flimsy at best. Though the point can be made that many club events and speakers fall during the busy, homework-filled school week, this is not the case for the Denison Gaming Guild, which held its annual BADOGRE event this past Saturday, Nov. 16.

BADOGRE, which stands for “Big Awesome Day Of Gaming, Role-playing and Eating,” is an important fixture of the Gaming Guild’s yearly activities and has been since the early years after the Guild’s founding fifteen years ago, says Guild member Peter Hurford ‘14, a political science and psychology double-major from Cincinnati, Ohio. Each BADOGRE consists of a day of member-led programming, ranging from campus wide Easter Egg Hunts to conference room set “one-shot” RPG (Role Playing Game) experiences. This year’s programming schedule stretched from noon to well into Sunday morning and included such events as a Hungry Hungry Hippos tournament and some organized forays into the Game of Thrones Card Game.

For those students who may only have caught wind of Gaming Guild from the various BADOGRE advertisements posted around campus, the Denison Gaming Guild is a student organization that brings together lovers of games of all forms, from the various contemporary offshoots of “Dungeons and Dragons” to the resource-management-centric “Settlers of Catan.” Throughout any given week, Gaming Guild members gather in small groups for independently scheduled role-playing-games (RPGs), and for games of Epic Duels, but the highlight of many a guilder’s week is definitely Game Night, which takes place on Saturdays, from 7pm until people decide to go home. Every Saturday that students are at school, the Guild hosts a Game Night, during which students gather, mostly on the second floor of Burton Morgan, to socialize, strategize and occasionally deliberate over games of Werewolf, a fantastical variant of Mafia.

Though a cursory glance at the Guild’s Facebook events may send the message that the Gaming Guild is a tight knit community, complete with its share of inside jokes and idiosyncratic leadership positions—in lieu of president and V.P., the group elects a Greater Poobah and Lesser Poobah each election cycle—the Guild is nothing if not inclusive. Whether you bought and tore into Pokémon X or Y on launch day or you enjoy the occasional game of Munchkin, there’s a place in the Guild for you.

Though the group’s dynamism and currency with gaming trends keeps it from feeling archaic, the Gaming Guild isn’t a recent edition to campus. Founded in the late nineties as an organization that facilitated the playing of tabletop RPGs, the Guild has grown over the past decade into the diverse, communal organization it is today. Even in the past four years, the Gaming Guild has undergone something of a “paradigm shift,” says Quentin Acord ‘14, a cinema major from Winfield, W. Va. who currently serves as the Guild’s Greater Poobah.

“When we were freshmen, the guild was mainly about RPGs and board games were a side thing. Now games are the main focus of the guild events,” says Acord, referring to the vast library of games amassed by the Guild in the past few years. Acord is nonetheless pleased with the massive growth the organization has seen during his time at Denison, some of which has been precipitated from this greater emphasis on pick-up-and-play games. For students who “don’t want the rowdy party atmosphere,” Acord says the Gaming Guild provides a “really necessary community space.”

One student for whom the Guild has played an instrumental role in his experience is Daniel Carlson ‘14, an English and religion double-major from Cleveland, Ohio. “My first few weekends freshman year were spent awkwardly attempting to be like someone I wasn’t at parties or by myself on the computer, so finding a place to hang out with other people with similar interests [was] just wonderful.”

On a campus often criticized for a culture centered on close-quarters, alcohol-centric dorm parties, the Gaming Guild may serve a unique function for a large, though mostly quiet portion of the student body. Indeed, speaking about the impact of the Guild on his Denison experience, Carlson says, “It has made it all the more wonderful. Most of my friends have ties to the Guild. Even ignoring its significance in my freshmen year as helping me meet people, it is still a great place in which I can unwind and be myself.”