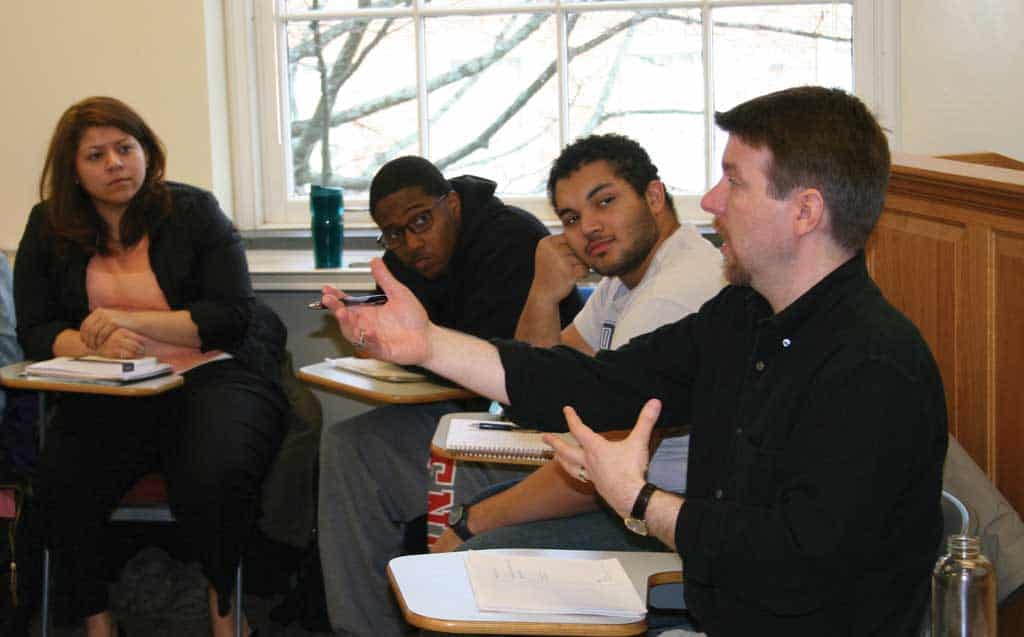 Many students in the communication department might know Bill Kirkpatrick as one of the resident media experts — but there’s a lot more to the tenure-track professor than that.

Bill Kirkpatrick was born in Portsmouth, Va. to a Navy parents. The self-described “navy brat” lived in Iceland until he was four years old, then moved to Tennessee where he was a boy scout, before the family settled in Northern Virginia in Fairfax.

In high school, Kirkpatrick’s favorite subject was English and he says he “was in the brainy AP clique. We weren’t the nerds but we weren’t the cool kids.” He became editor-in-chief of his high school yearbook, which he calls “my big thing. I really enjoyed graphic design and layout.”

Kirkpatrick liked graphic design so much, that after graduating high school in 1985, he planned on going to college to study it — at least that’s what he told his parents. According to Kirkpatrick, his parents were college-minded — he wasn’t. “I really wanted to go to flight school,” he said. He convinced his parents to allow him to apply to one college: New York University, one of the few schools that had a graphic design program. If he didn’t get in, he says he would have gone to flight school.

To his parents’ delight, Kirkpatrick was accepted to the big city school. While people may know Northern Virginia as a cosmopolitan extension of D.C., Kirkpatrick’s hometown “still had cows and farms” when he was growing up there. He describes the transition as a culture shock. He remembers driving into New York for the first time and how “ungodly tall [the Twin Towers] were. You see it in films, but to actually be there [was] so intense.”

“He gave me the ability to think about what matters,” says Kirkpatrick, who attended NYU during the Reagan-era. “This was the time where race, gender, and class were coming into people’s consciousness.”

He also points to Alexandra Juhász, a professor who he describes as “a super feminist, which wasn’t common then.” He says that in her class on gender and film, some of his peers didn’t respond well. “I remember other men in the class being hostile and resistant.”

Although Kirkpatrick had some professors that he admired and some good experiences at NYU, he says,”I loved New York, but I hated NYU.” He says that he couldn’t believe “how bad of an education I got from this elite, private university […] I never had to go to the library, I never had to do research.” Kirkpatrick, who graduated from NYU in 1989, also found the social life at NYU to be disappointing. “It’s very hard to find the people you were going to connect with,” he says of the nation’s largest private school.

After college, Kirkpatrick didn’t matriculate straight to graduate school – he took an eight-year detour to Switzerland. German-speaking Kirkpatrick worked for a Swiss airline, an opportunity that he attributes to being in “the right place at the right time.” In the nineties, he says that Switzerland had an unemployment rate of two percent and actually needed more workers. While his job paid him well and gave him several opportunities, Kirkpatrick says “I came back [to the U.S.] because I always knew I wanted to go to grad school.” It turns out he was right about being in the right place at the right time – several years after Kirkpatrick left Swiss Air, the company began layoffs and soon dissolved altogether.

Kirkpatrick arrived in Madison, Wisc. in 1996 to attend the University of Wisconsin. There, he focused in media studies, and took classes with communication heavyweights such as David Bordwell and John Fiske. At Wisconsin, Kirkpatrick’s lackluster education at NYU caught up with him: “My first few papers sucked,” he said. Ultimately, Kirkpatrick ended up spending ten years at Madison, where he got “fascinated” by radio and broadcast, and met his wife of nine years, Anna Nekola, a fellow Denison professor.

After completing his doctorate in 2006, Kirkpatrick landed his first job teaching one semester at the University of Michigan. Although he now teaches at tiny Denison, Kirkpatrick says there are several advantages to teaching at a large school like Michigan. “I like lecturing. That’s fun for me, and it’s something [and] lecturing gets unnecessarily devalued at a liberal arts institution,” he says.

When his contract was up at Michigan, Kirkpatrick found himself replacing a professor on sabbatical in the fall of 2007 at Denison. At the end of the semester, he was offered a two year visit at Denison, but another offered emerged: a tenure-track position at Sacred Heart University in Connecticut. Ultimately, Kirkpatrick chose Denison, where he says he “had a much better vibe.”  When his two year visit ended, Kirkpatrick became the “inside candidate” for a tenure track media studies position at Denison, where he sits today. His wife, Anna Nekola, wasn’t sitting at home. Professor Nekola teaches in the music, communication and queer studies departments, reflective of her specialties. According to Kirkpatrick, his wife was getting her doctorate in musicology when they met at the University of Wisconsin, with a doctoral minor in media studies. He says that Nekola’s interdisciplinary interests have been nurtured by Denison: “Denison has been very supportive of her.”

Currently, Kirkpatrick is co-editing an anthology on media and disability, and is writing a book on radio and disability. He says that he got interested in the subject of disability after hearing a plethora of radio ads in the 1930s that “were using disabled people as an imagined ideal listener[…] since they can’t come into society, society needs to come to them.”

Outside of his life in academia, Kirkpatrick enjoys playing guitar and loves traveling — some of his destinations include Mexico, Egypt, Ireland, England, and Wales. And in case you were wondering, Kirkpatrick went to flight school after all — he earned his pilot’s license while he was in Switzerland. Of his life, Kirkpatrick says, “I feel very, very fortunate. I try to live in a state of gratitude.”