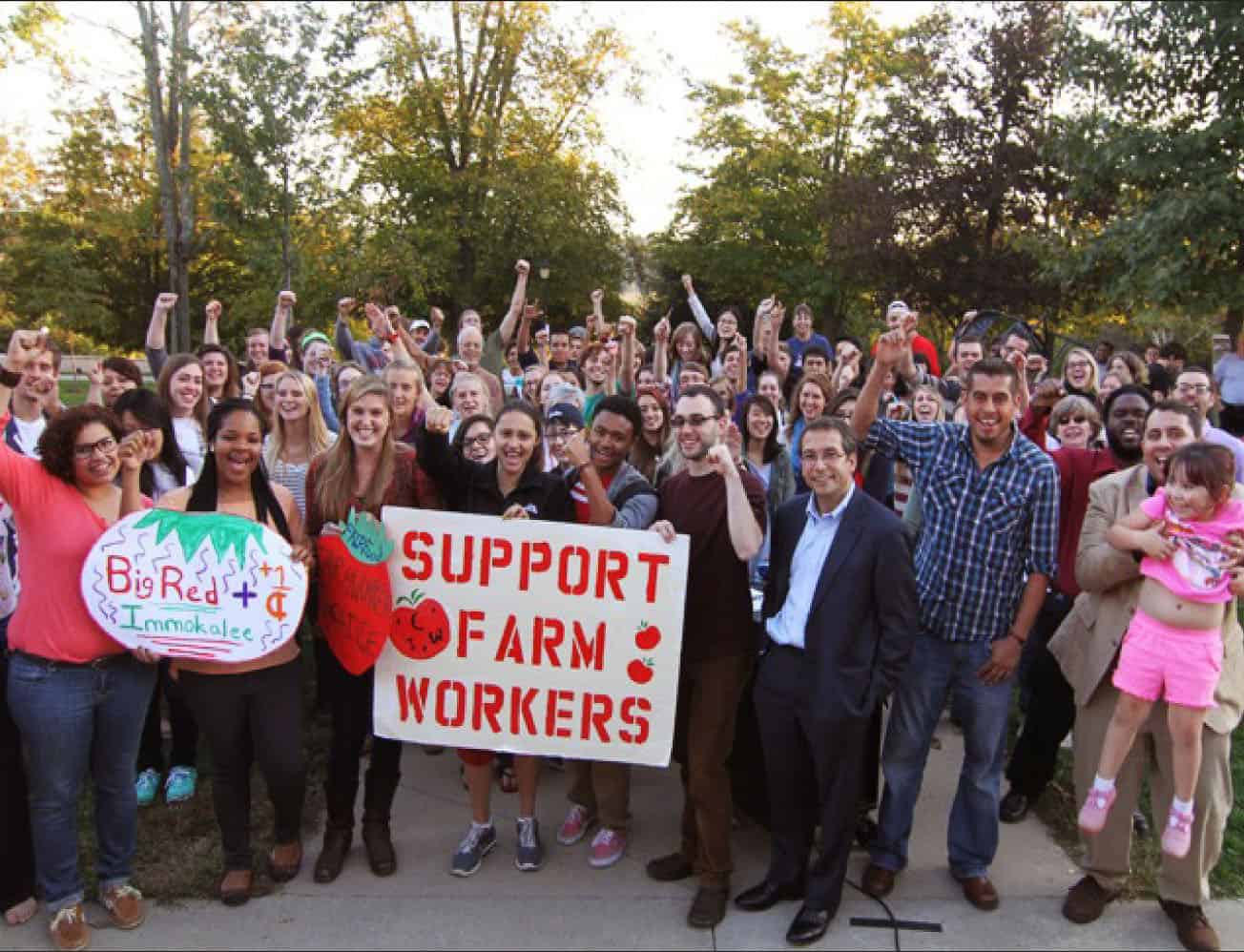 If you thought slavery was a thing of the past, you are mistaken. Sadly, modern day slavery is still a prevalent issue for the United States. The 1st Annual Food Festival  held on campus a couple weeks ago (Oct. 14) created awareness about modern day slavery as well as the role of corporate sustainability in creating better working conditions for farmworkers.

The festival, which was sponsored by the Sociology/Anthropology and Environmental Studies Departments, People Endorsing Agricultural Sustainability (PEAS), Campus Sustainability, The Spectrum Series “The Real Utopias: From Dreams to Practice,” Global Studies Seminar and Denison Dining featured the Coalition of Immokalee Workers (CIW) , the Student Farmworker Alliance (SFA), Bird’s Haven Farms and the Sparta Cafe, 99% of Newark and East Central Ohio.

During the festival, Gerardo Reyes Chavez, who is a representative of CIW, shared his story of the working conditions he witnessed and endured while working in the farm fields in Immokalee, FL.

Reyes Chavez explained that Immokalee, FL produces over 90% of our nation’s fresh tomatoes during the fall/winter season, which is why it is crucial for, corporations that buy large quantities of Florida tomatoes such as, Wendy’s joining the Fair Food Program (FFP).

The FFP is a model for social responsibility based on a unique partnership among farmworkers, Florida tomato growers, and participating buyers. Under the FFP, the farmworker rights are able to be better enforced.

“These workers are mistreated and paid so poorly but yet they are the ones who are feeding America…I couldn’t stop thinking about Cesar Chavez and his movement 50 plus years ago, when he said that he lived in a world where he would put food on other people’s tables but could not afford to feed his own family as a field farm worker,” said senior Political Science major Lesli Saestre, who attended the festival. “The fact that [Cesar Chavez] said that decades ago, we would assume that things have been resolved or improved and that is not the case as we heard at the Fair Food Festival.”

CIW, which has been organizing tomato pickers in the fields of Immokalee, FL for the past two decades and SFA, a national network of students organizing with farmworkers to eliminate sweatshop conditions and modern-day slavery in the fields, were the inspiration for the festival.

Professor Rusty Shekha in the Sociology/Anthropology Department worked closely with CIW and SFA while at Florida St. University when he was pursuing his PhD in Sociology. Professor Shekha along with seniors Matthew Kennedy, Austin Vanco, Michelle Agunloye and juniors Ashley Graef, Yasmine La Salle and Jenna Marchese worked intently to bring CIW and SFA to Denison as part of their Wendy’s Midwest Tour.

The Wendy’s Midwest Tour led by CIW and SFA visited over a dozen schools to carry the fight to Wendy’s on their campuses in and around the company’s home state of Ohio and will continue to stand in solidarity with farmworkers until Wendy’s signs the Fair Food Program.

Denison’s Student Farmworker Alliance joined other students and Ohioans in action on Oct. 19 in Columbus in a peaceful protest to pressure Wendy’s and will be participating in another protest again on Nov. 16.

For more information on the Fair Food Festival, taking part in the peaceful protest on Nov. 16 or interested in joining Denison’s Student Farmworker Alliance please contact Professor Rusty Shekha at shekhar@denison.edu.  For more information on CIW and SFA please visit: www.ciw-online.org  or www.sfalliance.org.