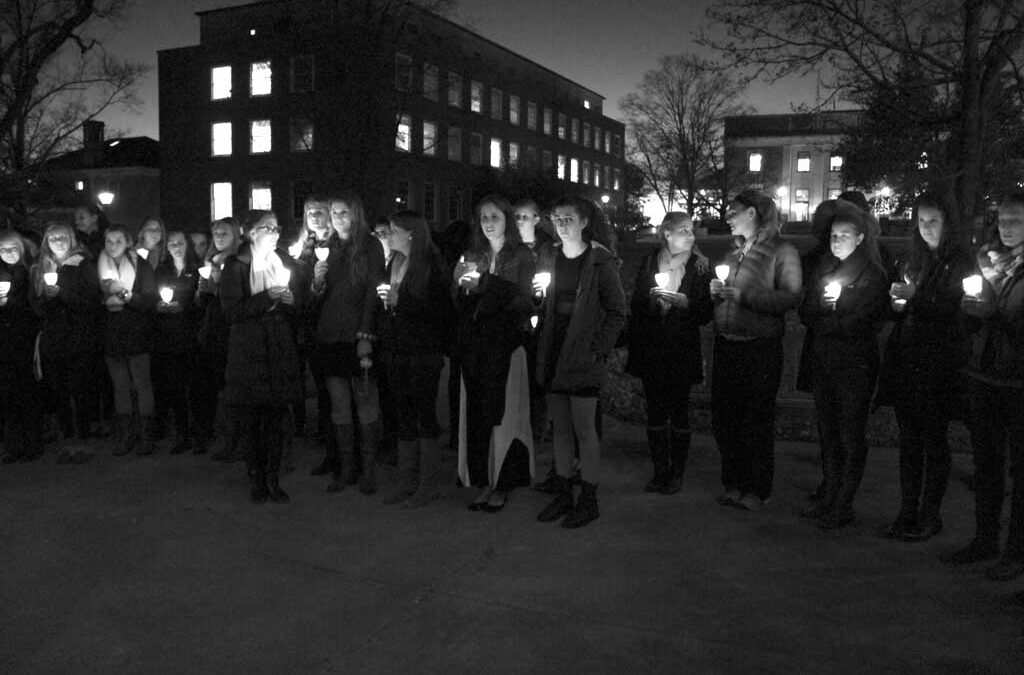 A circle of over one hundred silent students formed around the flagpole on the academic quad on Thursday, Nov. 14. The candles they held glowed a brilliant gold against the deep blue sky just after sunset. They all came to celebrate and remember their friend, classmate, and sister.

Elizabeth Minter would have graduated from Denison last year. As a sophomore, she was diagnosed with gliomatosis cerebri, a rare, rapidly spreading brain cancer. The disease took her life on May 30, 2012.

But Liz was anything but forgotten. Made clear by the large crowd that gathered at the candlelight vigil on Thursday evening, Liz’s short time at Denison had a big impact.

At the vigil, the women of Pi Beta Phi, the sorority that Liz belonged to, sang a song and read letters sent in by friends, alumni, and even Liz’s mother. Nina Kreuter ‘13, wrote, “I now cherish my memory of first meeting Liz because that night I met a true hero.” These sentiments were echoed throughout every other letter, describing Liz’s fun-loving, caring, and vibrant personality, and bringing tears to the eyes of many in attendance.

During her battle in 2011, Liz, her parents, and Dr. Jeffrey Greenfield, a research scientist and neurosurgeon at Weill Cornell Medical Center, founded Elizabeth’s Hope. According to the foundation’s website, Elizabeth’s Hope funds research to identify the “unique molecular characteristics” of brain tumors, so that doctors can treat each patient’s tumor most effectively.

Denison’s Panhellenic Council adopted Elizabeth’s Hope as their philanthropy this year. Mary Cate Bagnell, a junior council member from Philadelphia, said that they wanted to choose a cause that would unite the student body and allow Liz’s legacy to live on at Denison. “Even those who never knew Liz are aware of the trauma associated with any type of cancer, and as a community we see the importance in gathering to support each other,” Bagnell said.