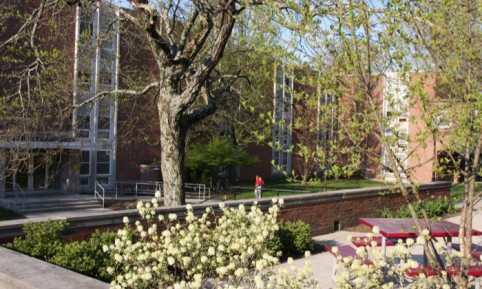 Intruder in Shorney at 5 a.m.

Sunday night, students received a DU alert in their emails. Some thought it would be a tornado warning. Instead, it said that early Sunday morning, a female first-year student in Shorney awoke to find a man lying on top of her.

The woman screamed, awakening her roommate. According to the email, “The student and her roommate observed a second man holding the door open while the other man fled.”

The incident occurred at 5 a.m. and was reported to security at 11 a.m. The DU alert was sent before 5 p.m. that day.

The men were described as being “light skin[ned]” in the email, but Director of Security and Safety Garret Moore says that it’s safe to assume they were white.

Moore also refuted rumors that the men were acting as a result of hazing, saying that hazing activity tends to happen in the spring and “it’s not likely to be Greek-related, [but] anything’s possible.”

He says the next step in the investigation is “to look at card access and talk to neighbors,” but if no new information arises, the case could go cold.

“We should figure out a way to get people to lock their doors,” Moore added. He says that security is thinking of a campaign to achieve this.

This is the second time this semester that students have reported someone entering their room late at night and early in the morning. The last incident was in late September and involved sexual misconduct on East Quad.

Housing lottery for next school year, cheers and chaos