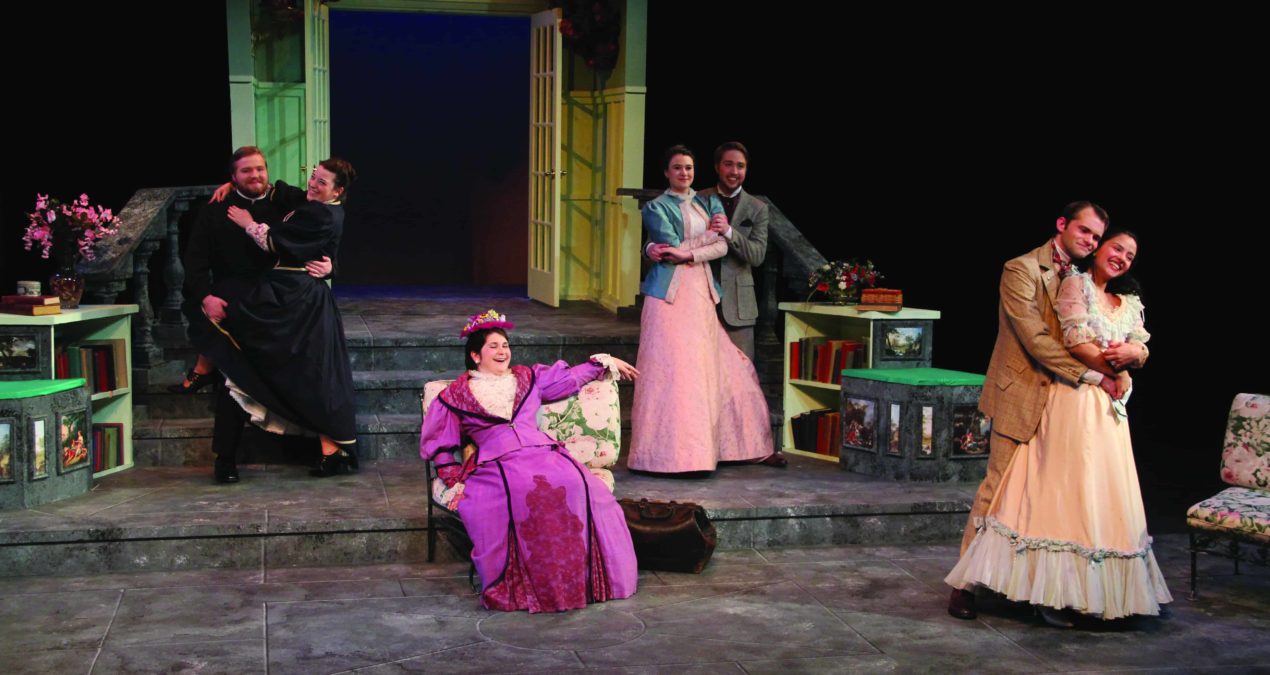 Oscar Wilde’s “The Importance of Being Earnest” is a comedic account of two friends who both pretend to be Earnest Worthing in the hope of wooing two young ladies who have always desired to marry a man by the name of Earnest.

“Earnest,” which premiered Friday on the mainstage, is the first Denison performance of this play since 1945 and features some of the campus’ quirkiest student actors.

Jacob Betts ‘15 and Matt DeMotts ‘15, who play the lead roles of Algernon Moncrieff and Jack Worthing respectively, give a hilarious performance as they exchange well-timed banter between their vigorous consumption of English muffins and cucumber sandwiches.

Natalie Kindler ‘17 steals the show with her over-the-top depiction of the innately absurd and aristocratic Lady Bracknell. Her appearance on stage garnered huge applause from the audience at Saturday night’s show, even before she had spoken a single word.

All of the “Earnest” actors seem to have mastered the art of ridiculous facial expressions, which very well may be the show’s strongest aspect, as a good portion of the Victorian-era jokes go directly over the heads of the average audience member. Still, comedy prevails as the actors leap and bound across stage, exaggerate pretentious British accents and generally play up the physical comedy. Jacob Betts ‘15 and Janyce Caraballo ‘17 cast as star roles in the play.

The Victorian costumes, designed by guest costumer Jessica Pitcairn, who has designed for TV the YouTube hit video “The Problem with Jeggings,” are absolutely striking and added to the atmosphere of the show.

Several of the outfits, which more or less accurately depicted the complexity of the Victorian era, were constructed from scratch by Joyce Merrilees and the students of the Denison costume shop.

Though the corsets worn by the actresses in the show tend to hinder their movements in occasionally obvious ways, they certainly serve their purpose in making the ladies look refined and period appropriate.

The set, much like the costumes, beautifully enhances the story as in each of the show’s three acts it undergoes a complete transformations without really being changed at all.  Between acts, stage hands dressed as servants appear on stage to remove furniture and props in plain sight of the audience. The practice of showing the crew, though unorthodox, gives a little bit of extra theatricality to the enchantingly idiosyncratic show.

Though the show has its flaws, its overall atmosphere is one of enjoyable charm.  Director Mark Seamon and the all-star cast does the show complete justice.

Despite the show’s length—a staggering two hours and twenty minutes—it is definitely worth going to see. I would advise, however, against sitting in the front row as there is a “splash-zone” where the audience is destined to be showered with bread crumbs.

“Earnest” resumes its run on Wednesday with an 8:00 p.m. show at Ace Morgan and continues through Saturday.

Academic Quad and Slayter project look to next phases