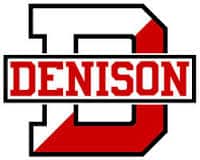 Last season ended with tough loss in the quarterfinals of the NCAC tournament to OWU (Ohio Wesleyan University) for the Denison Big Red men’s basketball team.  The team had to cope with this tough loss in addition to a season that did not live up to their expectations.

“Well, I don’t think it was just the tough loss to OWU.  I think we had a very disappointing season. The year before we were 3 points away from going to the NCAA, had a great run at the end. We lost all those senior who were really good leaders but we had one of the best players in country coming back, Dimonde Hale. We see one of the better players in the conference in Alex Longi and bunch of young guys with talent. We thought we could be better, but just never got it going.” Said Head Coach Bob Ghiloni.

Coach Ghiloni was pleased with how the team responded after the loss by the team’s hard work in the offseason and preseason. There were some significant strides made by the team according to Coach Ghiloni.

“We had a really good spring here in terms of conditioning, in terms of skill work. Guys came back this fall in pretty good shape and we’ve had a very good preseason. So, I think if anything what that loss did is got people to look inside themselves and say ‘What do I need to do to help us be better? What happened last year?’  We were young maybe some immaturity, physically and mentally at times. It just caught up with us. But I think we made some strides to overcome that this year.”

The Big Red is thrilled to have All-NCAC Men’s Basketball 2nd team Alex Longi back for his senior season. He is seen as very versatile player and a leader for this team.

“We have one really good player in Alex Longi. We have a couple of juniors who I think have a chance to be pretty good, Brad Wollard, Robby Weingart and senior DJ Bridges. That’s our core of older guys. But’ I think we have a pretty good collective foundation in terms of we are willing to play defense. That’s were it starts! We are pretty good in condition and we are fairly athletic even though we are small. So those things together with the system play I think we have something we can build with. And think our guys realize that we are only as good as the guy next to us. We’re not going to do it on our own.”

Going into the season there has been a lot of competition among the team to evaluate where each player stands, Coach Ghiloni made it clear that the roster is fluid.

“We’ll get to see a few more things, see where guys stand. And we tell our guys that the roster is fluid. We have some guys who aren’t going to dress for the first game when we travel to W&J. And that could change after a couple games. Honestly, there is a lot of competition.”

The NCAC conference is expected to be solid overall this year with usual top dog Wooster and OWU. Coach Ghiloni and the Big Red are looking to be competitive in the conference this season.

The Denison Big Red Basketball team will travel to William and Jeffferson (W&J) to start their season.