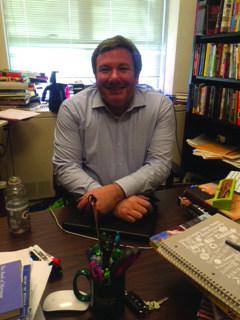 If you ever wondered what type of professors the religion department has kept up their sleeves, go into Professor Jonathan Moore’s office and you will find some of the coolest, quirkiest things. Walking into Moore’s office, you might think he is a genius student. On his door he has stickers everywhere and around his office are bible character action figures and bible character Legos. Then, turning toward his bookshelf you might see a collection of over 100 books. On his desk he keeps an action figure of King David as a teenager. He even has the Legos for the Christian trinity of God, the Son, and the Holy Ghost (the holy ghost actually looks like a ghost). I was also given the chance to see the Old Testament Lego Comic Book he has next to his book shelf.

Moore has been Denison’s Assistant Professor of Religious Pluralism for five years. The son of two high school teachers, his mother taught English, and his father taught History while also coaching basketball. Giggling, he said, “I can remember one time I had my parents for seven periods through the day.” Even Moore bared the actual ordeal of his parents being around everywhere he looked.

Following high school, Moore attended Illinois Wesleyan University in Bloomington, IL. He majored in, English and History which was only coincidental to the professions of his parents.  He admits there must have been some influence from his parents but he did not major in the humanity courses with his parents in mind.

After graduating, Moore decided graduate school should be next. “I liked school enough and decided to keep going.” So he attended the University of Chicago and found that the divinity school was limitless for him as a historian. This led him to earn both his Masters and Ph.D in History of Christianity.

He liked that religion was an interdisciplinary field, allowing him to learn about the effects of humanity through sociological and philosophical standpoints, and even entertainment. Dr. Moore then went on to complete his post doctorate at the University of Illinois, and taught as a professor at Grinnell College for four years before heading to Denison.

Currently, Moore is teaching a course titled “Mormons” about the Mormon faith, the Book of Mormon, and the history of the Holy Stones. The Holy Stones were discovered in Newark, OH in 1860 in the Indian Mounds and they held a special significance to many Mormons in the early 19th century. For some, these stones still place historical importance. The Holy Stones were believed to be stones that proved that contemporary Mormons were genealogically connected to the ancient tribes of Israel, which represent God’s chosen people.

The Holy Stones were found with Hebrew inscription. However, it was soon discovered that the inscription was not ancient Hebrew but of newer Hebrew and would probably pose as uncommon Hebrew inscription to the ancient tribes. Therefore, the stones for some Mormons and Scholars are believed to be a hoax deflecting the proof set for 19th century Mormons. The Mormon faith believes themselves to be God’s chosen American Christian people.

The Book of Mormon sets out to claim this and to entail the true restoration of Christianity and is subtitled as another testament of Jesus. What Dr. Moore’s course is seeking to understand is “what’s most at stake in [the Stones] being a hoax”.

Moore’s fascination with the Mormon faith led him to teach a course detailing the faith and the issues brought up by the Holy Stones. According to Moore, the faith has over a million followers.

Mormons tend to favor patriotism, hard work, and family. People of the Mormon belief make it their life mission to possess and show these values to prove their nature of being close with God. Moore hopes to teach a seminar someday connecting both the Muslim and the Mormon faith because of their adverse similarities and differences within society. The Mormon faith is seeking to attain the mainstream of religious culture.

Moore has written and published two books thus far. The first, Education Religion and the Common Good: Advancing a Distinctly American Conversation About Religion’s Role in Our Shared Life. He co-wrote this book with Martin E. Marty, who is an author admired by Moore.

The second, is a book in which Moore wrote alone including a foreword by Martin E. Marty, titled, Suing for America’s Soul: John Whitehead, The Rutherford Institute, and Conservative Christians in the Courts. He is planning to write a third book based on pagans in a small town among others that are not pagan. He wants the book to provide readers with a look at how mutually exclusive world views can be included in a small town communities. The pending title is, The Devil Went Down to Hoopston.

With everything Moore has going on, he still manages to maintain a joy for learning and teaching religion. He has always been fascinated even if he was in doubt of certain beliefs, that there were people that did not have doubt. People that were “so steadfast in hanging on to that [faith]”. It seems like Moore is quite steadfast in allowing his students to embark on a journey similar to his despite any doubt they may have, he is introducing us to what it means to have faith.