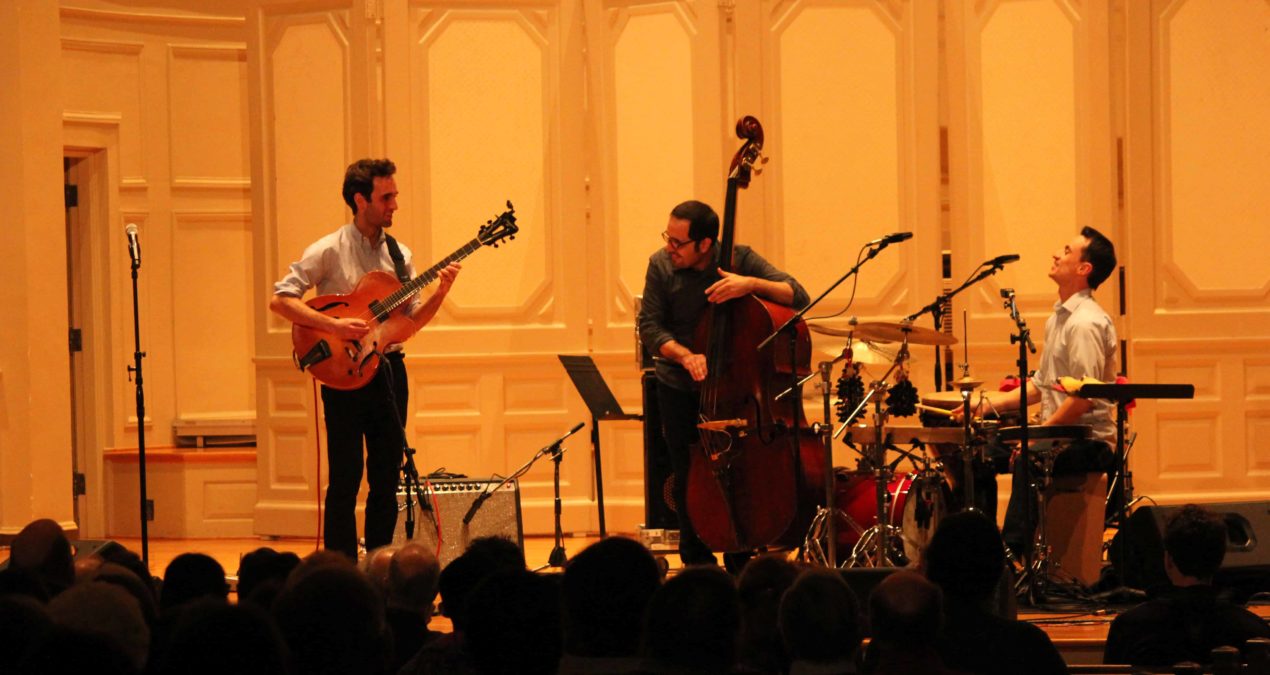 Swasey Chapel was full of sweet, smooth grooves on Feb. 8 as the Julian Lage Trio performed as part of Denison’s 2013-2014 Vail Series. Lage, a mere 26 years old, is a Grammy-nominated jazz guitarist. As a child, he starred in the documentary Jules At Eight, which was nominated for an Academy Award. Lage was accompanied throughout the evening by bassist Jorge Roeder and percussionist Tupac Mantilla.

The show began with an upbeat number, “Critter,” which set the tone for the rest of the night’s performance. It was evident that the group had a diverse range of musical influences stretching beyond jazz.

The rapid-fire strumming of Lage at times called to mind the jangle-pop sound of 80s alternative bands like The Smiths, yet Lage’s guitar work was also reminiscent of salsa and blues.

The polished and pounding sound of Roeder’s bass kept the rhythm going strong, while Mantilla’s lively drumming had the audience jamming and smiling all night.

The trio themselves seemed delighted to be at Denison, with smiles plastered on their faces for their whole performance. After the third song, Lage introduced himself and the band, and said that most of the songs for the evening were original compositions. “We’ve written a lot of things to show our strengths– it’s only fair,” Lage said with a smile.

On “Up From the North,” which Chelsea Winebrener, a sophomore English major from Delaware, Ohio, described as her “favorite song of the night,” the band sounded almost folksy and channeled a little bit of the blues as well.

At one point, Mantilla was clapping all over his body, somehow managing to make a sound as vibrant and fresh as the ones he made on the drums. Lage played a beautiful riff that sounded almost cyclical as it wove its way around the bass and percussion.

During “Margaret,” which Lage said was written for a singer-songwriter and collaborator, the band took on a quieter sound, with twinkling xylophone percussion and a more traditional jazzy feel.

Lage performed solo on “Red Prairie Dog,” which he described as “a new old-time fiddle tune,” and again at the tail end of the performance.

The trio’s last song together, “233 Butler,” opened with an almost Western-sounding riff and kept the audience captivated throughout with Lage’s free-floating and bouncy guitar work, speedy bass-picking from Roeder, and yet more improvisation from Mantilla, who at one point got up and played Roeder’s bass (not with his fingers on the strings, but by slapping it with his hands).

The group’s creativity and genre-spanning style made for a stellar show that was never boring or repetitive. “I really enjoyed it,” says Winebrener. “There was a lot of variety and improvisation in their music.”