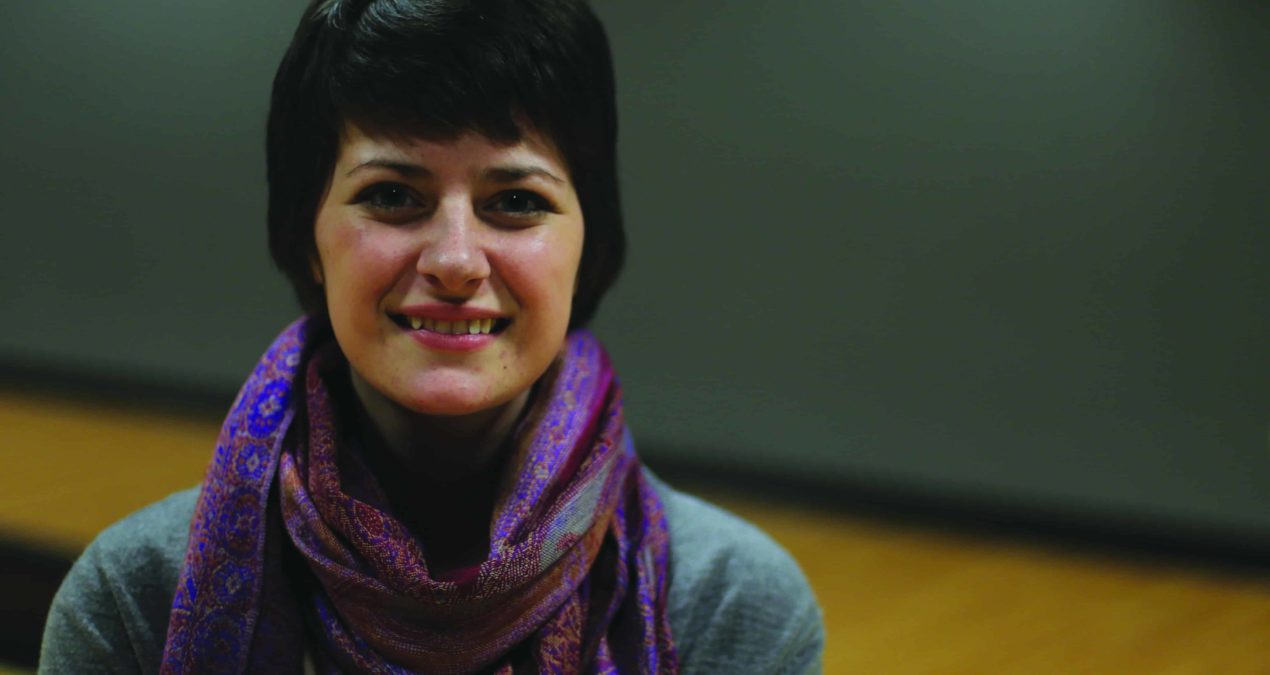 Denison University is a college known for its abundance of hard-working, multi-talented students and faculty alike. However, not all students showcase their talents in the same way, or in the same venues. In the fall of 2012, her first semester at Denison, Emily Carnevale, a creative writing and cinema double major hailing from Columbus, Ohio, made a splash by performing a few pieces of performance poetry at some Bandersnatch open mic nights. Earlier this semester, Carnevale contributed her creative voice to the Martin Luther King Jr. Day convocation in Swasey Chapel, further cementing herself as an artist willing to challenge the campus culture.

If you had told Carnevale in her sophomore year of high school that she would become a seasoned veteran in the art of Spoken Word poetry, she would have dismissed you, like she had dismissed her high school English teacher. Though she had a passion for writing that Carnevale’s teachers could not ignore, the thought of becoming a performer seemed far-fetched at best. “I was that kid in the choir who always stuttered and shook whenever I was given a solo,” says Carnevale.

However, by the time her junior year rolled around, Carnevale was singing a different tune. She found her performative voice through creating a piece inspired by a difficult time in her life: her struggle with a tumor during her freshman year. “The doctors handled it very poorly—it was benign, but they claimed it was malignant. It was something I wanted to talk about but I didn’t know how to say it. I wrote draft after draft trying to explain it.” Although the process of turning her pain into poetry was difficult and emotional, the end result, Carnevale says, was “very cathartic.”

In her junior year, her school entered into a poetry slam competition and emerged district champions. Carnevale was already a poet, but she has worked in the performative medium of spoken word and slam poetry (the competitive form of spoken word) ever since.

“It’s really different—slam poetry. You are writing in the mindset to perform what you’re writing. It’s like trying to write a play, but you’re not acting. You’re breaking the fourth wall, you’re engaging the audience. You can’t really do complete fiction in poetry. It comes out of you, it can be twisted but it comes from a sort of truth and experience.”

Speaking about the difference between “traditional” poetry and “performance” poetry, Carnevale notes that the two forms, while essentially quite similar, are significantly different. “With traditional poetry, it is meant to be read, but it also has this layer of sound, and it has beats and feet and syllables and meter. It has a rhythm, everything has a rhythm. But it’s not as in your face or as intense as performance poetry is.” This urgency has a lot to do with the competitive, dramatic context in which spoken word is often found. “Whatever you need to say, you need to be able to get it across in one performance. These things are only going to be heard once.”

In her personal work, Carnevale tends to gravitate toward topics that “aren’t readily discussed on a daily basis, or even some things that are considered taboo subjects.”

Slam poetry, in Carnevale’s words, “is the forum in which things that otherwise would not be discussed can be discussed.”

On Denison’s campus, there is no shortage of taboos waiting to be confronted by discourse. One such issue that has resonated with Carnevale is Denison’s long-standing struggle with living, rather than merely “performing,” its mission of student body diversity.

Coming from a very diverse high school, her time at Denison has been the first time that Carnevale has been in the majority as a white woman.

“In my first year at Denison I knew I was not happy here. I was very confused and there were a lot of differences I wasn’t used to,” says Carnevale. “I knew that this campus lacked the kind of understanding and open-mindedness that I was used to. So, coming back my sophomore year, I decided to join a few more organizations that I identified with.”

Though she had already been a part of aART (an Alliance Reinventing Tradition, Denison’s spoken word club,) Carnevale has broadened her involvement to include other organizations, such as Sustained Dialogue, in which she can help to foster challenging, fruitful conversations between herself and her classmates.

Although working in the medium of performance poetry has allowed Carnevale to speak powerful truths about taboo topics, she admits that she can only speak for herself and her experiences.

“I struggled writing the Martin Luther King poem, because I didn’t want to seem as though I understood what [African-Americans] went through, because I will never understand that,” says Carnevale.

You can stop by the Bandersnatch on Wednesdays for Open Mic nights to see Carnevale perform her spoken word poetry.