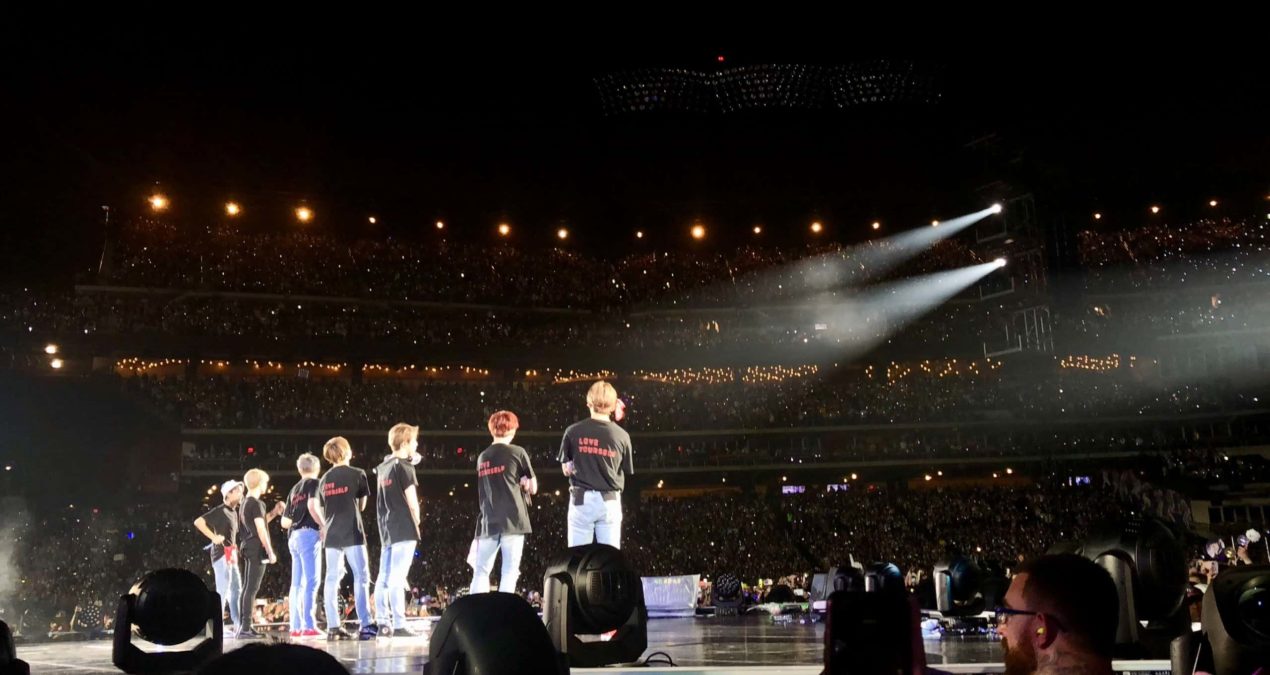 I have been talking about this concert for a while, and it finally happened. We were able to see BTS make history with their U.S. leg of the Love Yourself tour. In one word, it was inspiring.

That’s because it wasn’t just any concert series. It was a series that allowed a Korean music group to reach people all over Canada and the United States, and it will continue across Europe and Asia. In addition, BTS was the first Korean group to play a stadium in the United States.

The sold out Citifield in New York City in under 20 minutes.

BTS is a Korean idol group, falling under the genre of K-pop, that consists of seven members (RM, Suga, Jin, Jhope, Jimin, V and Jungkook). The have been blowing up around the world in the past two years. We recommend checking out their videos online for a full experience.

The concert itself overall receives a 10/10, but even exceeds that scoring if possible. We will breakdown the components that make up this score, pinpointing what about their show caused fans to camp out four days in advance for General Admission.

The music itself is very fun and upbeat, making it easy to jam out at the concert. The middle of the concert consisted of a mashup of several hits, old and new, where everyone was hyped up and jumping around. These songs got the crowd moving as the sound radiated throughout the venue. Even when most of the songs are in Korean, with only a small mix of English, the fans sang every word right on que.

BTS also find moments to slow it down, which gets the whole crowd singing together in an emotional moment. Their song “Epiphany,” a slow ballad about trying to love yourself, transitioned into a heartbreaking “The Truth Untold,” which is a painful song about someone you care about.

To top of the group songs, each of the seven members of BTS had a solo song, which allowed the crowd to be intimate with one member and connect with them outside of the group. Important to add, each solo song truly allowed each member to show their unique style. V was able to show his R&B, jazzy style with “Singularity,” while Jhope hyped up the crowd with his upbeat, undeniably energetic stage presence during “Just Dance.” The set list didn’t have a single dull moment.

BTS, as a Korean pop group, is known for their dancing. If anyone would think dancing is lame, they haven’t seen BTS. For some reason, they are able to make dancing look like the coolest thing in the world. Not one member missteps and they are perfectly synchronized. The effort they put into rehearsal was evident.

The dancing can only be explained in words so well, so we recommend looking up their songs “Mic Drop,” “DNA” or “Fake Love” to get a good sense of BTS’s insane ability to move.

Along with the music and dancing, the production of the show is part of the Korean group concert experience, and BTS nailed it. The lights, videos and special effects they used were timed perfectly. There was a combination of fun and seriousness, with bubbles, streamers and fireworks flying into the air. The aesthetics ranged from soft and cute to mature and sultry.

Their personalities also contributed to the visual experience, as they took the time to speak in English for the mostly American audience. The care they have for their fans showed when they spent 15 minutes thanking the crowd for attending.

Although some fans are extremely overwhelming, the community around BTS brings together a diverse crowd. People with extreme differences can gather around this one group and truly converse for hours on this topic. There is a lot of love surrounding BTS, which makes it surprising how humble the group seems to be.

At the concert, some of the best moments were when the group relied on the fans to pick up the songs and provide the energy, and the fans delivered. Many fans had the BTS official light stick that is synced up with the visuals, but the most beautiful part of this was to see just how many fans were able to show up for BTS.

With a message of loving yourself and speaking your voice, BTS reaches millions of people through their music and social media. BTS held just 15 shows in North America, making the concert a rare experience. The enjoyment for those who attended comes from all these aspects, but the ability to watch BTS make history and be a part of it may have been the most welcoming and rewarding aspect.

So, if you have heard of BTS and don’t think much of them or assume they are an overrated “boy band,” we invite you to take the time to see what it is about them that had Americans in a frenzy this past month.