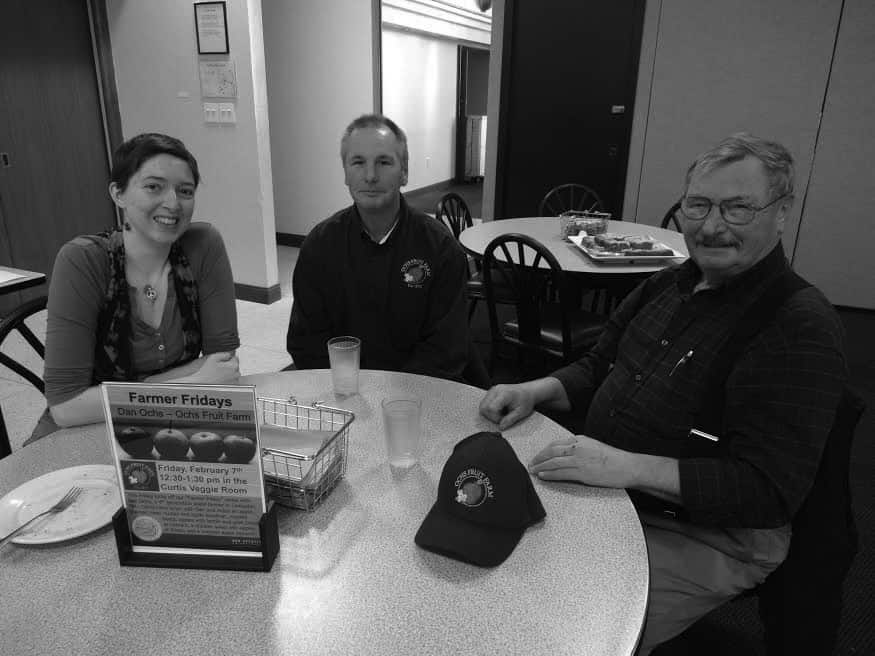 Farmer Fridays is a new Dining Services initiative to help students learn where their food is coming from and to be able to meet the people who grow that food.

This Friday Feb. 7 was the first Farmer Friday in Curtis dining hall veggie room from 12:30 to 1:30 p.m.. The featured farmers were Dan and David Ochs from Ochs Fruit farm, established in 1842 and located about 25 miles away in Lancaster, Ohio.

Students had the chance to eat lunch and ask questions to Denison Dining Sustainability Manager S.K. Piper and the Ochs farmers.

Unfortunately, a pipe burst in the Curtis veggie room so the event was disrupted so they had to relocate to a table farther away from general student traffic. Piper said that, “one or two students came over to say thank you for the apples,” but hopes for much more student participation as the series continues.

This is the first season Ochs Fruit farm has partnered with Denison. They provide around ten different kinds of apples to Denison at a time and grow over a hundred different types of apples.

“We’re very pleased with the way things have gone and the level of professionalism. When they talk about sustainability and high quality they actually mean it,” said Dan Ochs, a fourth generation apple farmer, talking about the relationship between them and Bon Appetit.

Bon Appetit has been using their apples since the season began in September but will likely run out next week, because Ochs Fruit farm stock of apples has finally run out. Apple season ended in November, which is when Ochs last harvested apples, and Denison has been buying those they had in storage since then.

Piper said that it was amazing that “we’re still getting delicious local apples in February because Dan Ochs has figured out the perfect temperature and humidity level to store the different varieties of apples for maximum flavor retention.” They know the exact temperature to keep the apples cold but without freezing.

Next week the farm will run out of it’s stockpile of apples so Denison will switch to using Produce One for their apples.

David Ochs explained that apples have a lot of nutritional benefits such as, helping to “reduce blood sugar, lower cholesterol, provide anti-asthma benefits, and they average only 80 calories.” He said that the skin on apples contains 70% of their nutritional value.

While the farm is not organic, Piper and both Ochs explained that the word organic is not synonymous with the word local or sustainable. It is difficult and impractical, according to Ochs, for small farmers to become certified organic. One of the things that sets Ochs Fruit apart from larger competitors is that they do not wax or brush their apples.

David encouraged students to “eat as much local food as you can.”

“You guys eat a lot of apples so keep at it,” joked Dan Ochs.

Piper hopes that Farmer Fridays will soon have a bigger following once more students learn about it. She’s going to change the time to 12 to 1 p.m. in order to accommodate students who have class at 11:30 a.m. and 12:30 p.m.

Next week the Farmer Friday will be Valentines Day themed. Piper will be the “stand in” farmer talking about the fairly traded Cordillera chocolate that the dining services uses. She spent a month in Columbia researching the fair trade chocolate, talking with farmers and seeing the factories and looks forward to sharing her knowledge with students.