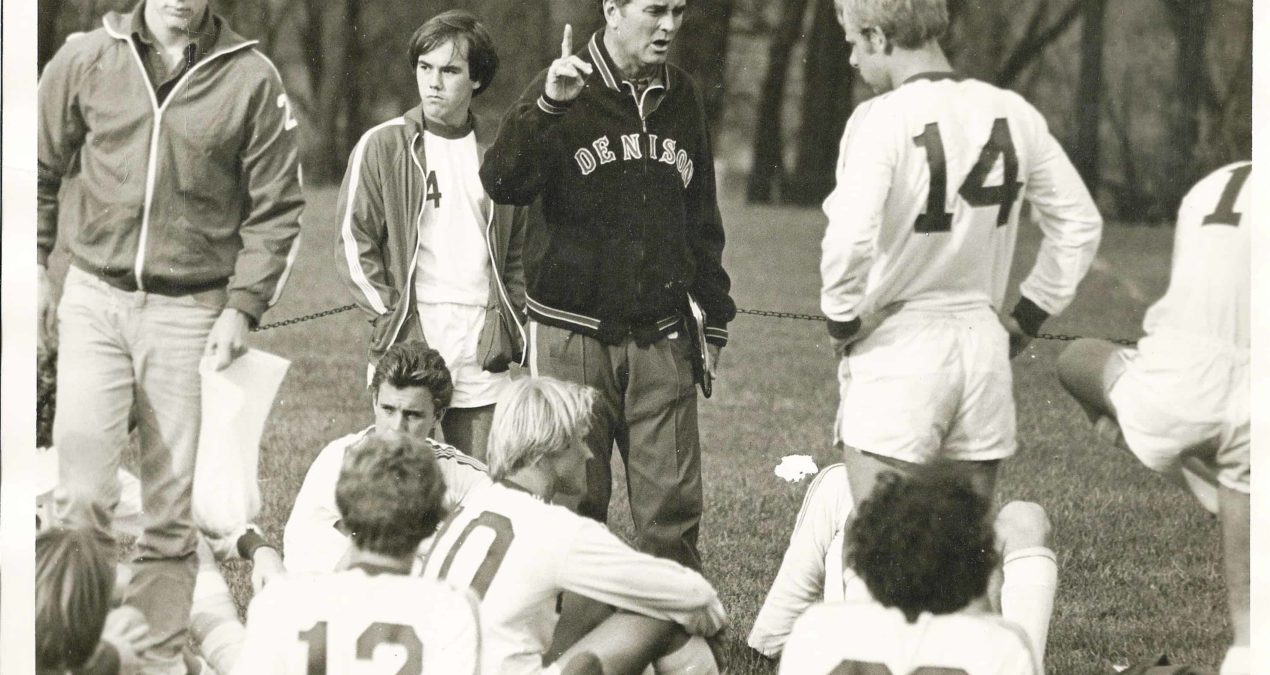 Former Denison coach, men’s athletic director and professor Theodore “Ted” Barclay, passed away in his home on Jan. 31 at the age of 83.

A memorial service was held in Barclay’s honor at Swasey Chapel on Feb. 5. Rev. Stephen J. Cramer conducted the service.

Barclay was born on April 22, 1930 in Zanesville, Ohio, the first of two children to James and Esther Barclay. He was active in the Boy Scouts and started a varsity swim program at his high school, Columbus North High School. In 1952, Barclay graduated from Ohio State University where he was a member of the swimming team as well as the soccer and lacrosse clubs. According to the Newark Advocate, Barclay was also a member of OSU’s chapter of the Phi Gamma Delta fraternity, which he later supported as faculty advisor to Denison’s chapter.

Barclay spent 35 years at Denison and retired in 1997 with the rank of associate professor emeritus. He began his career at Denison in 1962 when he was hired by the school to serve as an assistant professor and the head coach of the men’s swimming and diving program. During his time at the school, he coached six Big Red varsity programs. He was appointed director of men’s athletics in 1979, a post that he held for 12 years. Barclay was inducted into the Denison’s Varsity D Association Hall of Fame in 1997.

Upon his graduation from OSU, Barclay spent eight years as a science teacher and aquatics coach in the Shaker Heights school district near Cleveland. In 1962, he earned a Master of Education degree from Kent State University and was hired by Denison later that year.

Barclay coached the Denison men’s swimming and diving team at the school’s old Gregory pool for 18 years. Some of his most notable achievements for the Big Red included leading the swim team to ten second-place finishes at the Ohio Athletic Conference Championship, a sixth-place finish at the 1969 NCAA Division III Championships and an eighth place finish in 1970. He also helped form the North Coast Athletic Conference in 1985. In 2012, Barclay officiated the Big Red’s final meet at Gregory Pool.

Denison’s current senior associate director of athletics, Lynn Schweizer, began at Denison in 1973 and worked with Barclay until his retirement.  According to Craig Hicks, Denison’s sports information director, “[Schweizer and Barclay] played a very large role in the creation of the NCAC and the advancement of women’s athletics at Denison.”

Schweizer was good friends with Barclay before they became colleagues. “Ted was a close friend and a respected colleague whom I admired for his leadership and for the important role he played in the advancement of men’s and women’s athletics at Denison,” Schweizer said.

“For more than three decades, Ted impacted the lives of his students and colleagues, teaching us all important life lessons along the way.  He valued each individual and took the time to truly connect with students, fellow coaches and other faculty members. He was a positive force in all of our lives, and the loss we feel within the Denison athletics family runs deep.”

Barclay’s legacy at the school will not be forgotten. The former coach was buried at Denison’s College Cemetery with military honors from his time serving in the navy on Feb. 6. In addition to Barclay’s professional accomplishments, he also had strong relationships with his friends and relatives. At the memorial service, Barclay’s son Bruce said that his father “wasn’t glass half full; he was glass overflow-eth.” Barclay’s other son, Jeff, said that his father inspired him to become a part of the coaching world. His friend, Nan Carney-DeBord, Denison’s current director of athletics, noted that, “His humor was his guiding light.”

Barclay was a role model to many current Denison employees. “He was a Denison person through and through. The way he dressed, the way he acted, the professionalism, the whole thing,” co-cross country and assistant track and field coach Phil Torrens said. “He was a very professional individual but a close friend, you could say. He wasn’t a person that wanted to be better than you or wanted to keep you at arm’s length. He wanted to help you, he would be your guidance person and he would be your mentor.”

Hicks echoed Torrens’ sentiments. “The thing that I will remember most about Coach Barclay was his charisma,” Hicks said. “Frequently, he served as our master of ceremonies at various alumni functions, and he was always able to make everyone feel like the most important person in the room.  I hear people say ‘Denison is a special place’ all of the time, and they’re right.  But what makes Denison truly special are the people, and Ted Barclay is perfect proof of that.”

Barclay is survived by his wife of 60 years, Patricia; sons and daughters-in-law Bruce and Dorothy Barclay of North Andover, MA, Brian and Danielle Barclay of Granville and Jeff and Beth Barclay of Sunderland, VT; and grandchildren Jill, Todd, Caroline, Kendal, Taylor, Owen, Julia and Livia.