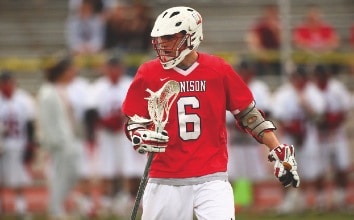 Retribution was sweet on Saturday for the #15 Men’s Lacrosse team as they passed their first real test of the 2014 season against #14 Washington & Lee in Lexington.

Last year, the then #10 Big Red were upset at home by the unranked Generals in an 8-7 nail-biter, which has clearly been weighing on the minds of the experienced Denison team, that only lost four seniors from its 2013 roster.

The Big Red coninued the momentum built up from last week’s domination of Mount St. Joseph (where they scored 29 goals – 23 of which were recorded in the first half – to the Lions’ 1), and relied heavily on upperclassmen offensively, especially in the first quarter.

Eddie Vita ‘14 scored the first two goals of the game and followed them with an assist to Teddy Powell ‘15, contributing to a four-goal first quarter.

Throughout the first half the Generals kept pace, tallying five to Denison’s seven, but it would be the third quarter when they would make their deciding move.

On the backs of Cam Lewis ‘15, Christian Zanetis ‘16, and Joe Wood ‘14, Washington and Lee would take the lead with just under 6 minutes to the end of the quarter.

After a tying goal by Chapin Speidel  ‘14 to close out the third, the fourth quarter would be sealed by the Big Red with an early goal by Vita to complete the hat trick, and two more by Luke Walsh ‘17 with 6 minutes to go and James Meager ‘16 with 30 seconds to go.

Goalie Chris Thomas ‘16 stepped up in his first full game of the season saving 15 of the Generals’ 24 attempts, a definite improvement from last year’s defensive performance.  Changing up the strategy played a key role in Saturday’s victory.

“We really took it to them by sliding early and really trying to disrupt their fast ball movement,” said Thomas after the game.

“When we did that they started getting frustrated and ended up making some mistakes.”

He also emphasized the importance of the confidence that the upperclassmen exude to Big Red success this year.

According to Thomas, “Last year at this point in the season we really did not know what to expect out of each other.  Now we have all been through some tough games together and learned as a unit.”

Thomas mentioned Austin Campbell ‘14 as a potential rallying point for the team, but also highlighted how “balanced” the Denison attack and defense have become.

The key to Saturday’s win, however, was the Big Red’s control of the momentum on both sides of the ball.  After the game, midfielder Blair Farenholt, who notched two of Denison’s three goals in the second quarter, stressed the significance of regulating the pace of the match.

“We were ultimately able to win because we stayed tough and didn’t allow them to take control of the game when they had the momentum in the beginning of the second half.”

Look for the Big Red to replicate the strategies and lessons they implemented against the Generals. On Wednesday the men will travel to Salem, VA to take on the Maroons of Roanoke.