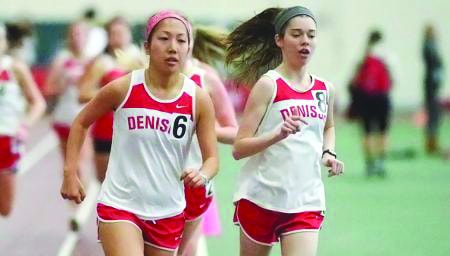 The women’s indoor track and field team looks to top the success of last year’s team by continuing to yield top place finishes. Last year’s team finished in third place at the North Coast Athletic Conference Championship. With stars Tiffany Davis, Aedin Brennan, Kiki Yewer and Olivia Galano all returning for the Big Red this year, it looks as though they have the talent to make another push for the Conference Championship.

Sophomore Aedin Brennan was one of the three who competed at Kent State. Brennan participated in the pentathlon, which consists of five events: shot put, high jump, 60-meter hurdles, 800-meter run and long jump. She placed fourth at the meet and currently ranks fourth in the nation for the event.

“Having scored as much as I did at the end of the season last year, I am very comfortable with being fourth in the nation for the pentathlon,” Brennan said.

Senior Tiffany Davis and sophomore Kiki Yewer also competed at Kent State in the 200-meter dash, which was important for two sprinters as the event is now contested at the national championship.

“Kiki and I needed to run the 200-meter dash because it was not offered at the Capital meet and it is now an indoor event at Nationals,” Davis said.

Davis posted a fast time of 25.31 seconds in the 200-meter dash. Yewer also stood out among the crowd by posting some of her fastest times yet. As for the rest of the team, they competed very well at the Capital University meet, proving  they have what it takes to compete for the Conference Championship. The team also had a meet on Jan. 25 for Denison’s Annual Lid-Lifter meet. Brennan and Davis both received NCAC Athlete of the Week honors for their individual performances. The team as a whole shined as Denison took first in the competition.

“I think our team has potential to do very well,” Brennan said following the meet.

Part of the reason for the success of the Big Red lies with the coaching staff.

Head coach Mark FitzPatrick did an excellent job with recruiting. Some of his recent recruits have already had stellar performances so far. However, FitzPatrick is no lone horse.

Senior distance runner Olivia Galano was very complimentary of the staff and took notice of the experience that each coach brings.

“The coaching staff is great,” Galano said. “We are fortunate enough to have a variety of coaches, experience, and specialties. Coach FitzPatrick has truly turned our program around and has made almost seventy of us all better athletes.”

Davis has no doubts that the team will perform well. “ I think confidence is high, and it will continue to get higher the more teams we compete against and the more meets our new team gets under its belt,” she said.

Despite the fact that the team is taking one meet at a time, it is still looking forward to the Conference Championships, which Denison will host on March 7 and 8.

It will be the last hurrah for the seniors, including Davis and Galano.

“It is a great honor to be able to host, and we are so grateful for our new facility which has given us the ability to do so,” Galano added.

Softball team takes three of four in a pair of doubleheaders