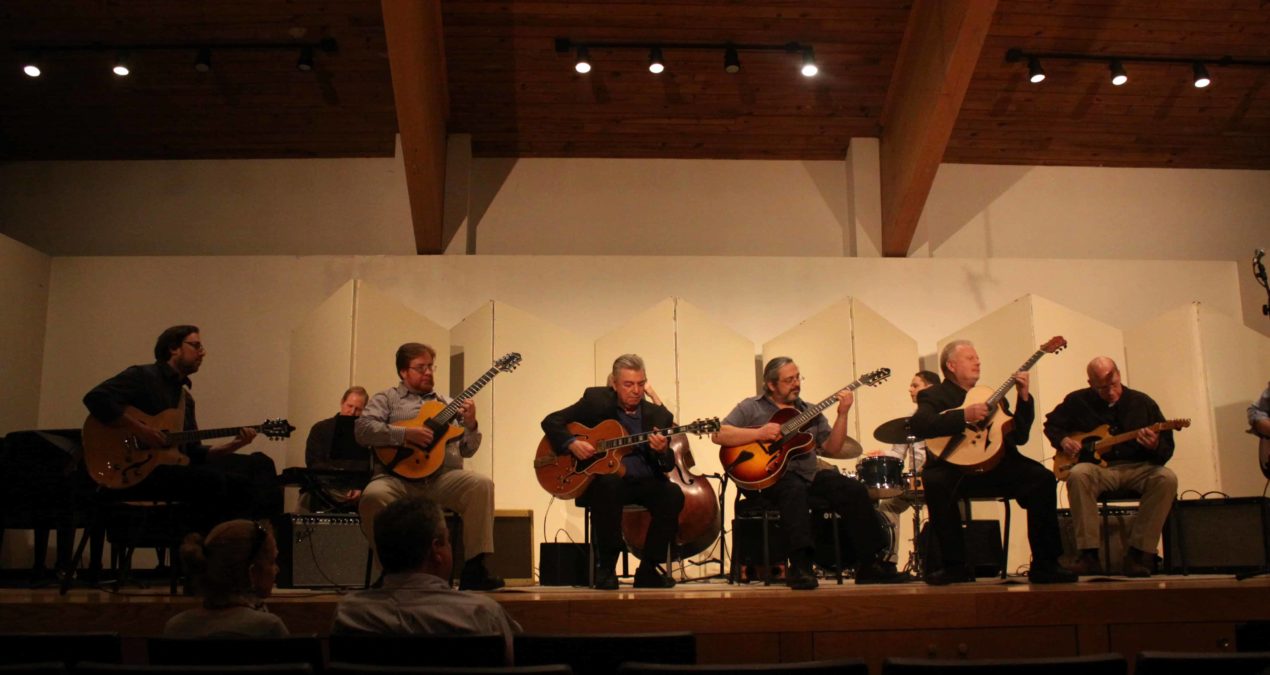 Burke Recital Hall was filled to the brim on March 8 for the opening night of Denison’s 17th Annual Jazz Guitar Festival. According to Tom Carroll, guitar instructor and coordinator of jazz studies at Denison, the festival is the longest-running event of its kind in the United States.

Prior to the evening’s performances, clinics were held with jazz guitarists for anyone interested in working on their skills or just jamming. This year, the festival opened with a set from Bob Ferrazza, the director of jazz studies at Oberlin College, and featured jazz guitar legend Jack Wilkins.

The crowd, while large, was noticeably short on Denison students. It appeared there were less than ten students present, with most of the attendees from the greater Granville community. The concert’s location may have caused the low student representation: were it held “up on the Hill” in Swasey Chapel (and not on South Quad), I feel there would have been much greater student attendance.

Carroll spoke before the performances, thanking the community and the support of the music department. He hid no excitement as he announced, “welcome to my really cool job; I get to do this for a living!” Carroll then introduced Ferrazza, who performed with bassist Doug Fritcheson and percussionist Seth Rogers.

Ferrazza’s guitar work whet the jazz appetite, with a bluesy cover of Duke Ellington’s “Things Ain’t What They Used To Be” that alternated between laid-back smoothness and fast-paced funk.

The second song “Green Bean Girl” was an original by Ferrazza, inspired by a cat he had who “played fetch” with green beans. It was slow-opening, but upbeat and melodic enough to pass for a Christmas carol.

Ferrazza’s final song, “Just In Time,” was the most classically “jazzy” of the bunch, with speedy bass work from Fritcheson and a fierce, pounding solo from Rogers at the end.

Fritcheson and Rogers also performed with headliner Wilkins, who Carroll described as “one of my guitar heroes.” He discovered Wilkins’ work when he was “transitioning from the dark side of blues, rock, and jazz” nearly thirty years ago.

Wilkins began his show with “The Things We Did Last Summer,” which was sweetly fluid and upbeat. Wilkins’ playing style, in contrast with other jazz guitarists I had seen, seemed almost more like old blues, with Wilkins leaning over the guitar and strumming more than plucking.

“Tranquitism” was a speedy, up-and-down climb for the trio, with rockabilly-esque riffs throughout and happy foot-tapping from Wilkins and audience members alike. A poppy rendition of the theme from Arthur followed, sounding almost beachy with its characteristic Burt Bacharach melody.

Wilkins also covered two songs by composer Henry Mancini, who he described as “one of the best.” “Two for the Road” and “Moon River” were solemn but peaceful; if nighttime had a sound, it might resemble Wilkins’ soft, fluid playing.

Like Ferrazza, Wilkins was also inspired by an animal for his song “Kiwi Bird,” written about a New Zealand tour and a bird given to him there. The title was fitting, with floaty guitar work from Wilkins and an incredibly rapid solo from Rogers. “For David” showed Wilkins reaching into danceable territory, with a salsa-like beat and short quick stops.

The show finished off with accompaniment from Tim Cummiskey, jazz studies instructor at the Ohio State University School of Music. Teaming up for “Invitation,” Cummiskey and Wilkins brought a rumbling but fluid dual guitar sound. The fun continued the next night, with all performers joining together for a performance with Rick Peckham, assistant chair of the guitar department at Berklee College of Music.

March is set to be full of jazz for Denison, with a Jazz Weekend coming up at the end of the month featuring special guest Rob Parton, along with instructors Carroll and Pete Mills.