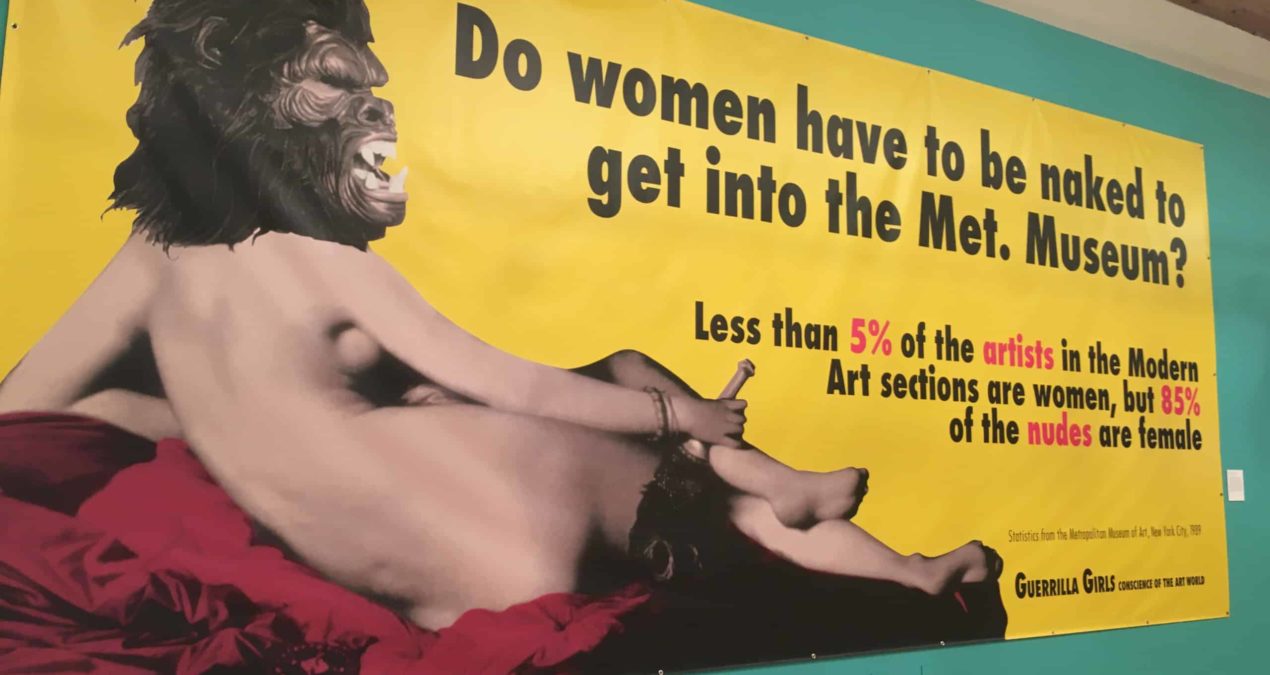 “Do women have to be naked to get into the Met. Museum?”

A large, yellow poster spread across a teal-colored wall commands visitors’ attention to the fact that “less than 5% of the artists in the Modern Art sections are women, but 85% of the nudes are female.”

The 1989 poster is one of the Guerrilla Girls’ most celebrated pieces. The 2012 rendition lists percentages at 4% and 76% respectively.

The Guerrilla Girls let the facts speak for themselves, and the message is clear: patriarchy still reigns in the art world.

Their exhibit,“The Art of Behaving Badly,” is on display in the Denison Museum until December, and is free and open to the public. The museum is open from 12 p.m. to 5 p.m. Monday through Friday.

The Guerrilla Girls are an anonymous group of women artists who, since 1985, “use facts, humor and outrageous visuals to expose bias and corruption in politics, art, film and pop culture.”

Members hide their faces by wearing gorilla masks in public. Each member uses a dead woman artist’s name as a pseudonym. Over 30 years, none of the estimated 55 members have been identified, including their founding members who remain active.

The Guerrilla Girls are bringing their fact-driven conscience to Denison’s art world.

Wit, politics and statistics dominate the walls of the quiet Denison Museum.

With vibrant backgrounds and bold lettering, a big tapestry lists museums that have the least art by women and artists of color on view.

A small, black and white poster lists how many women had one-person exhibitions at New York City museums last year.

In a corner of the museum, a woman’s voice projects from a small television screen saying, “Of all the winners of the Hahn Prize, how many were artists of color? 4%. All men.”

“Their pieces are so interesting because we see something of our own knowledge or experience reflected back on us,” said Kenzie Mick ‘20, who visited the exhibit with her Issues in Feminism class.

The Guerrilla Girls’ art asks viewers to do more than just observe.

One poster says: “If you’re shocked by these stats, join us! Demand that museums use our tax dollars to tell the whole story of our culture.”

As the exhibit explains, the art world is mostly run by billionaire art collectors who are male and white.

“Frida Kahlo,” one of the Guerrilla Girls’ leading members, explained the need for gender parity in art on “The Late Show” with Stephen Colbert in 2016.

Outraged by the insufficient notice being paid to female artists in the ‘80s, the Guerrilla Girls affixed New York City walls with posters, flyers and bulletin boards that waged facts about inequality in art museums.

They have expanded their mission to expose sexism and racism in our culture at large. Now, their imagery and commentary are displayed in art museums around the world, including the very institutions which their art protest.

A Star Is Born shines at Denison Film Society