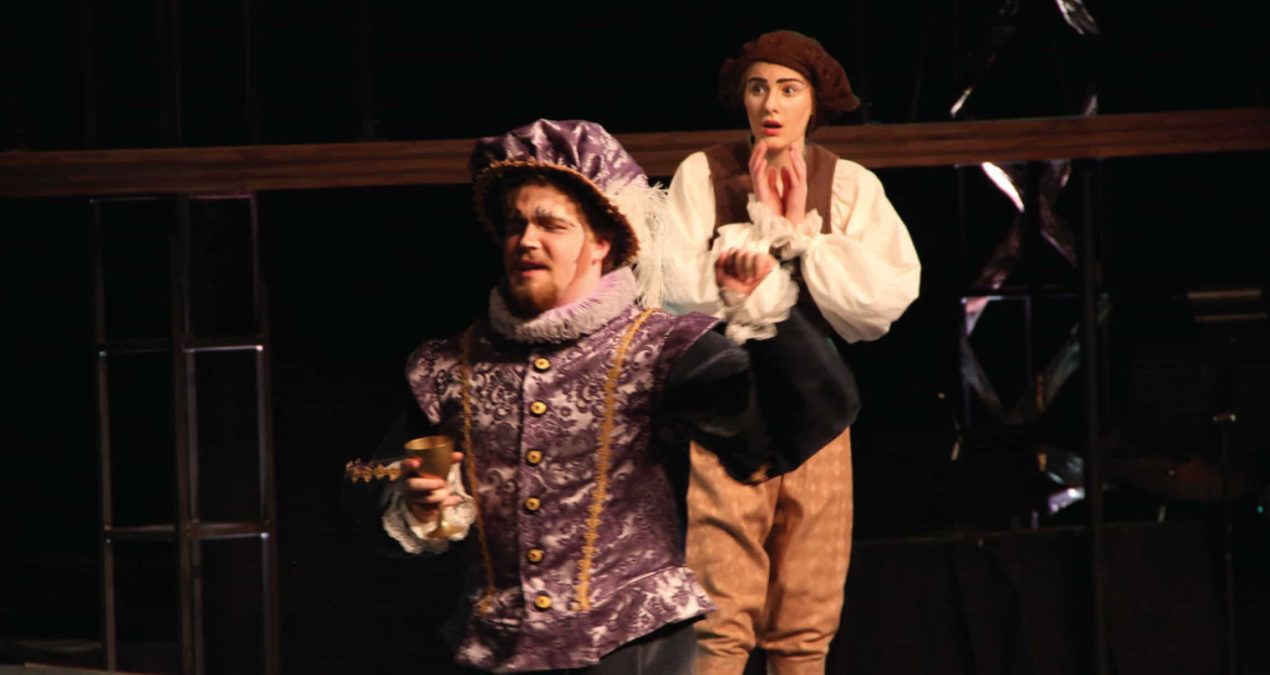 Set 20 years after the events of Shakespeare’s Twelfth Night, The Malvolio Project, written by playwright-in-residence Betty Shamieh, focuses on the eponymous former steward on whom the characters of the original Shakespeare played a cruel jape.

Although Malvolio (Jack Caudle ‘17) swore revenge at the end of the original play and remains bitter toward those who deceived him, he rises through the ranks of the Illyrian army to become a general and a war hero.

Now that he has made a name for himself, he plans to enact his revenge. A surprise, however, comes in the form of Volina (Heather Grimm ‘17), the daughter of Duke Orsino (Katy King ‘17) and Duchess Viola (Dyamone Hopkins ‘16) who falls madly in love with him after she joins the army in her mother’s disguise dressed as a boy.

Still bitter about the prank pulled on him many years before, Malvolio thinks she is mocking him. Hilarity ensues in the form of mistaken identity, cross-dressing, and a surprise twist at the end that is all reminiscent of true Shakespeare writing. “I thought it was fantastic!” said President Adam Weinberg. “It’s fun to see our students do a world premiere, and they did it justice.”

The dialogue itself is not in iambic pentameter verse (sorry Shakespeare nerds), but in a more modern speech style that flows more easily. This, I think, allowed for the comedic elements to be more easily understood, and there were definitely lots of laughs. Sprinkled throughout were also references to Twelfth Night, as well as other Shakespeare plays like Hamlet, Othello, and Titus Andronicus, which got plenty of laughs from audience members.

One element of the show that I was surprised didn’t detract from the story or comedy was the songs that were included, which gave a chance to show off the actors’ incredible singing voices as well. Feste (Nick Van Atta ‘17) in particular, deserves praise for his high clear tenor.

As Malvolio and Volina, Caudle and Grimm gave dramatic performances that fit well with how they used monologues and asides directed at the audience. The addition of new characters, including Volina, King Chadlio (Guram Saqvarelidze ‘14), and Prince Furtado (Will Hamilton ‘17) were integrated very well with the original characters.

The relationship between Chadlio and Furtado was probably my favorite comedic dynamic in the play; they reminded me of the Freys from HBO’s Game of Thrones, though much less sinister.

Toby (Dominic Pfister ‘17) and Maria (Katie Scott ‘17) entertained the audience just before the beginning of the second act with a ukulele serenade. The second act introduced the audience to the fabulous Sebastian (Merlin Bell ‘15), but no single character monopolized the show and everyone contributed equally to the comedy.

The set was reminiscent of last year’s Tartuffe in its simplicity and sparseness of furniture. The slanting stage might have alluded to classic Greek and Roman theatre, which was often performed on slanting stages.

The make-up had a Cirque du Soleil-esque quality that added to the surrealism of the show, with the Elizabethan costumes the only point of reference for the time period. Surprisingly, this all integrated in a unique way that somehow worked very well.