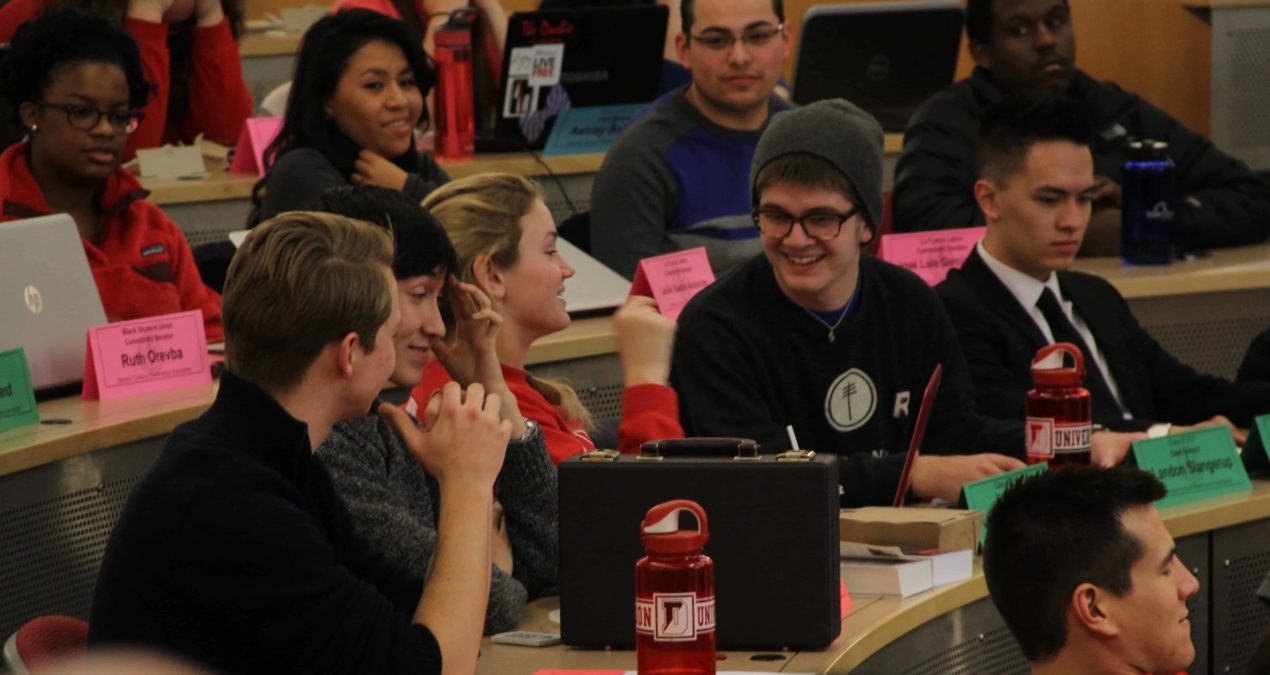 DCGA began a little differently Tuesday. During her presidential report about the Campus Affairs Committee, DCGA President Ana Morales diverted to give a short statement about her hopes for the night’s vote on the reserve fund proposals. She called for respectful dialogue and recognized that whatever decision DCGA made “a long-lasting impact on Denison students.”

DCGA continued an open debate forum where non-voting members could participate in discussion about the proposals (the Roost Renovation, the Externship Endowment fund, the La Fuerza Latina space, the event monitors in Slayter and the social spaces proposal) along with senators.

After the Senate voted to indefinitely table last week’s amendments, Senator Steven Hix ‘16 introduced an amendment that would change the La Fuerza Latina space name to the “Community and Cultural Center” and give the organization $35,000, while funding the Chamberlin bar (a part of the social spaces proposal)  $155,000 and the Roost Renovation more than a quarter of a million dollars.

“I do like this proposal […] but my biggest concern is with the bar,” said Aaron Robertson ‘16. He said that the North Quad, where Chamberlin is located would include more freshman dormitories in the 2013-14 school year. “Do we want to continue this focus on alcohol by putting this bar where it is?” asked Robertson.

“I question the process [behind the amendment],” said Finance Chair Kiara Sims ‘14, who said that Career Exploration & Development, which proposed the Externship Endowment, was not included in the meetings, and excluded from Hix’s amendment. She later would call the process “unethical.”

Senator Ashley Bartreau ‘16 supported Hix’s amendment, but amended Hix’s amendment to deduct $10,000 from the Chamberlin bar and move it to a renovation from Crawford lounge, which passed in under two minutes, with 25 voting for, and 12 voting against.

Former DCGA President Drew Johnson ‘14 defended the bar, saying that other freshmen dorms, while not close to a bar, are “close to the Sunnies,” senior apartments where parties occur. “This bar would be open to everyone,” said Johnson, and he argued that “the bar would be safer than the Sunnies” because the bar would have to check ID before serving students.

“We don’t necessarily have [the details] for the other proposals either,” responded Senator Kate Ellicott ‘15. “We’ve trusted the people who wrote the proposals,” she said.

“I have a problem that the highlighted thing on this list is a bar because we already have a drinking problem,” said Xavier Vargas ‘15, a resident assistant. “What about social spaces where you don’t drink?” he asked.

But President Morales and Vice President of Student Development Laurel Kennedy voiced that the Chamberlin space where the bar would go is currently an unfinished basement and that the space should be renovated.

Hix’s amendment passed, with 30 senators voting for it and 9 voting against. The amendment funded three of the five proposals, leaving out the event monitors and the Externship Endowment Fund. Finance Chair Sims again announced her disapproval of Hix’s amendment and after a five minute recess asked for representatives of the five proposals to explain the nature of their meetings with Hix outside of DCGA – Career Exploration & Development, who, according to Sims, said they were never contacted, left DCGA before the recess.

“It felt last minute,” said Nancy Aguilar ‘14 of her meeting with Senator Hix. Aguilar, who wrote the event monitors proposal said, “I walked away from the conversation feeling unsure about exactly where my proposal stood in regards to the other proposals that were talked about the most.”

Finance Chair Sims said that the process took place “without taking into consideration multiple individuals” and that “It makes DCGA look bad as a whole.”

Hix responded, saying that the process of his amendment was “the nature of compromise.”

The Senate voted in an overwhelming majority to make Hix’s amendment the final vote and the official reserve fund plan for DCGA, which would house a La Fuerza Latina space under a different name in the Social Spaces proposal.

“This is a recommendation the Senate has passed, to be passed on to the administration,” said President Morales after the vote to clarify that the passed proposals were not set in stone.

“DCGA has been in charge of the student activity fees for almost sixty years,” said Vice President of Finance Seth Patton. He said it was “unusual” and that “[the administration] will look at the proposal and get back to you.”

Granville Fire Station relocating to the entrance of Lake Hudson