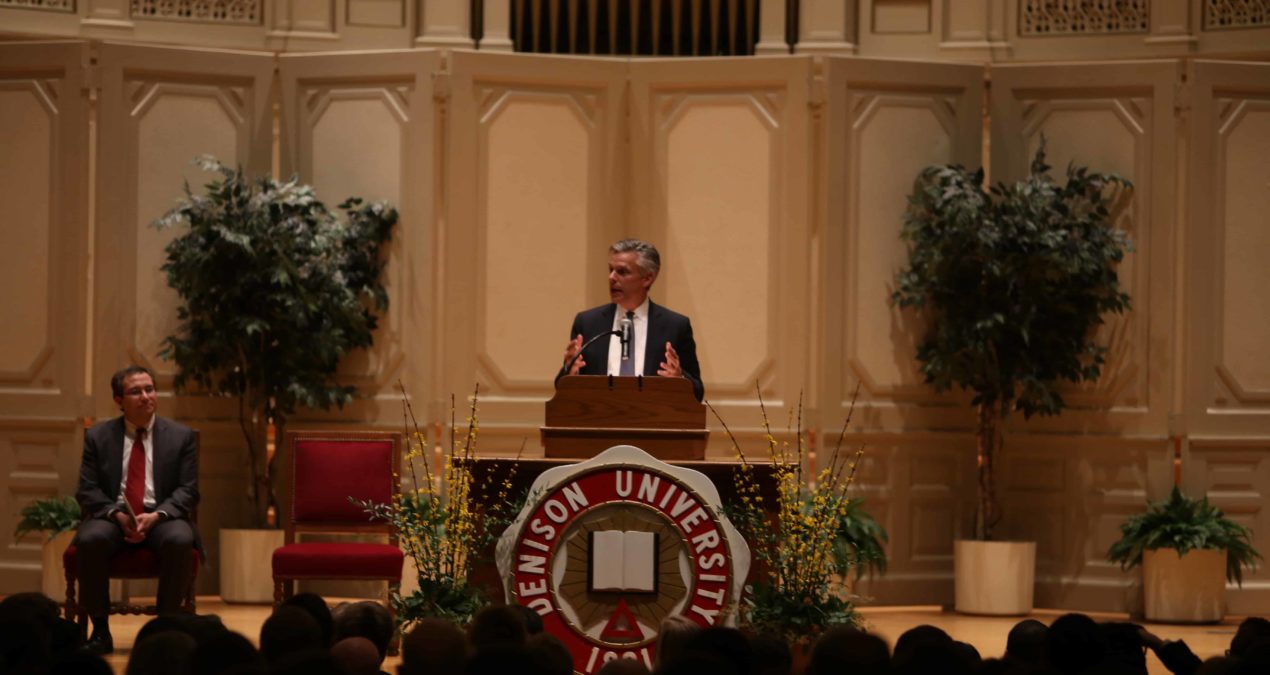 The Swasey stage was set with two chairs and a pulpit with Denison’s emblem on the front for decoration. The crowd talked quietly until 8:00 p.m. when President Weinberg escorted Jon Huntsman, the former governor of Utah and 2012 Republican presidential nominee, to the front stage to give his talk, “Restoring America’s Leadership at Home and Abroad.”

Governor Huntsman came to Denison’s campus on Feb. 24 by the Mary Elizabeth Babcock Lectureship in the American Conservative Tradition, which is a foundation that was started to bring well-known national and international politicians to Denison’s campus.

Because Governor Huntsman also served as the United States’ Ambassador to China for two years, he had a wealth of knowledge for those who attended his speech last Monday. He explained that China is currently making history, and there are two parts to this history: the rise of China, and the way the world responded. He said that the first part has already been written; however, “the part that hasn’t been written yet is how the world responded.”

Huntsman argued that it is up to the rising generation to help decide how the world responds. Because the United States is still one of the biggest world powers, he said, “the way the United States responds will be vital to the way history portrays these events.”

But even though he feels that China is beginning to take a big role on the world stage, he still has no fear that the US will lose its own spot in the international spotlight. He said, “I don’t see a problem on the horizon that we can’t handle because you millenials have a mindset of finding solutions.” When Governor Huntsman reflected on his time in China, he said that he was most fond of their education system because of how seriously students and teachers take it. This is something he argued that Americans could do better at.

He said that he has never “seen a more fertile moment for educational growth in this country.” He continued, “I have never been more optimistic about American universities and colleges as they have become the envy for students in other countries.” Some students did not appreciate Governor Huntsman’s lecture. Political science major Sean Carlin ‘16 said, “the very idealistic and almost unrealistic take Gov. Huntsman gave was nice to hear, but not entirely accurate to some extent.”

Carlin explained, “In my opinion, you can’t just say, ‘tell congressmen to just put America first’ and then clasp your hands together and say ‘boom, done.’” However, Carlin did believe that his take on China is noteworthy. He said, “his insight into China is something that all American citizens should stop and actually listen to. He made it very clear that the world we know now, will not be so much the same in a few years.”

In addition to giving a lecture open to the entire student body, he also gave smaller lectures to several classes in both the history and political science departments. For example, he visited Dr. Heather Pool’s political theory class on Freedom and Responsibility. Dr. Pool said for her class, students came prepared with questions to ask the governor about topics ranging from leadership to China.

Mallory Hinz ‘14 from Birmingham, Michigan said, “I was really impressed talking to him inside and outside of class. It was interesting to hear someone who has accomplished as much as he has.”

As co-chair of No Labels, a group aimed at putting a stop to the highly polarized American political climate, Governor Huntsman warned students to not get lost in the politics of politics. He said it is time for everyone to “put the community ahead of politics.” He continued, “We need people who are willing to put the country above their political affiliation.”

Even though Huntsman is now one of the leading politicians of our time, he did not originally aim to be a politician. He said that when he was in high school, he used to “make fun of people who ran for public office.” In fact, Huntsman’s dropped out of high school in order to join a rock band, but he “wasn’t good enough to make it in the music business,” so he instead attended the University of Utah.

Governor Huntsman became involved with politics because he was “interested in foreign policy and electoral politics.” He does not regret his decision to step into the public spotlight, but he recognized that taking on that role is “tough, invasive, painful, and [it] can destroy lives.”

But despite this part of politics, he has had the “greatest career in the world of public service.” Huntsman said he is not currently entertaining thoughts of running for president in 2016.

He advised Denison students to not “get cynical and never grow detached because I know how easy that is.” His last words of advice to the student body were “if you’re looking for a long-time investment, might  I suggest property in Sri Lanka.”