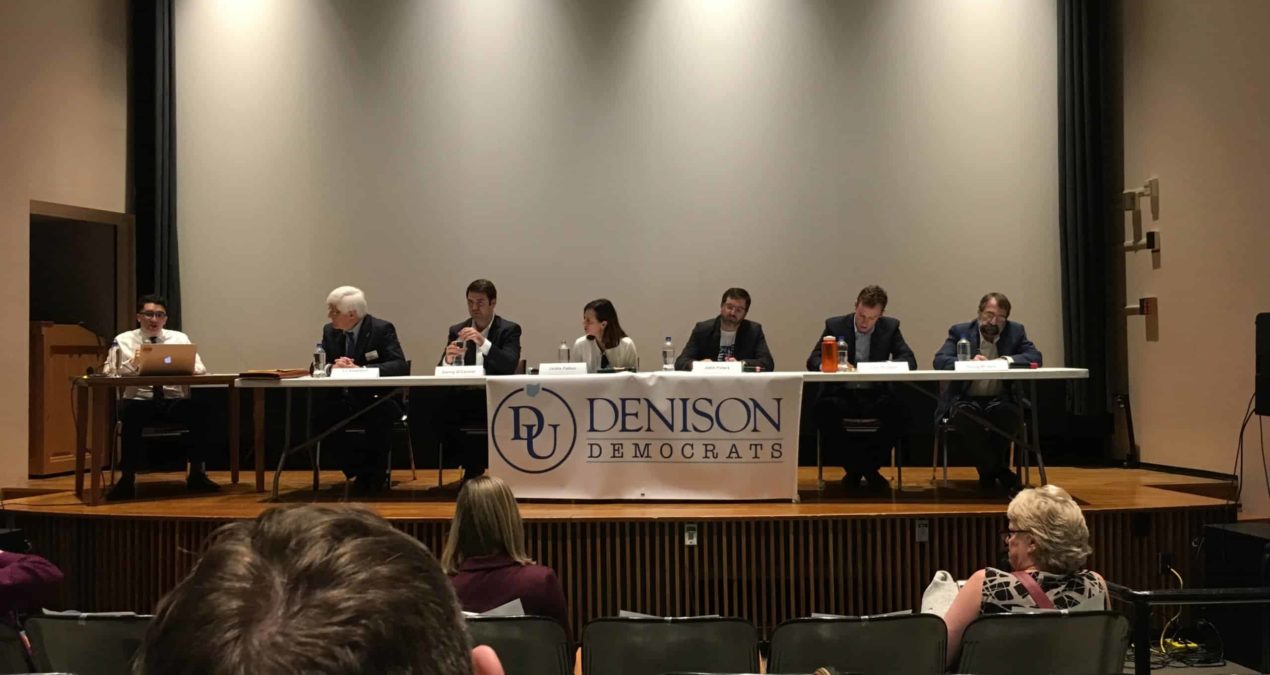 Politics: is it ever fun? Some would tell you no, but others would say that there are parts of politics that are guaranteed to be interesting, and those are the debates.

This past Thursday, the Denison Democrats hosted a debate for all the Democrat candidates for the open seat in the 12 congressional district, which is the district Licking County is located. The election is to be held on August 7 and is a special election. That means the winner will serve the last five months of incumbent Pat Tiberi’s term.

The Democrat candidates for this seat include Ed Albertson, Danny O’Connor, Jackie Patton, John Peters, John Russell, Doug Wilson and Zach Scott. All of these candidates were at the debate with the exception of Zach Scott. Scott is a former sheriff of Franklin County and was unavailable due to a family emergency.

With the other six candidates present, the debate brought in students and community members from all over the district. Let’s see how the candidates stacked up.

Albertson seemed to take the debate head on as he spoke with confidence and assurance. A former member of the army, this was his second time running for office. One of the topics that seemed to hit Albertson hard was the issue of gun control.

“I’ve used an M16 and if anyone tells you an AK15 is not a war weapon they are feeding you load of ‘BS’,” said Albertson. “If you wanna have a machine gun you gotta have it insured, imagine how expensive insuring an AK15 would be.”

His experience in the army seemed to garner an agreement of credibility on the subject. With his adamancy of gun control combined with his army past, Albertson seemed to know the difference of the use of a gun in the civil and war settings.

“I will not accept a dime a penny or a nice word from the NRA,” said Albertson, referring to the notion that many pro-gun candidates in Congress do accept money from the National Rifle Association.

Although he lost the last time he ran, Albertson did not seemed fazed in this debate and showed no signs of letting up the race.

O’Connor was the only Democrat candidate that is a politician and has held a political office. He was the Franklin County Recorder until he decided to hop on board with this election.

Although called out several times for being a politician, specifically by candidate Peters, O’Connor said that his history as a politician should provide comfort to the voters.

“I’m proud of my public service record. I’m proud of the programs I’ve started for the homeless and the people I’ve helped. If that makes me a politician so be it,” said O’Connor.

O’Connor wanted to make it clear to the audience that he was there to fight for them. He felt that he would be able to represent everyone in the district. O’Connor noted that the winner of this election would be responsible for the Republicans and other political party members. As a politician, O’Connor says he knows how to work with people of different viewpoints.

Patton garnered attention as the only woman running for the spot, which played well to her advantage.

“When I look at Congress I don’t see people who look like me. They don’t look like my friends or family. They look like my husband, white, middle aged male,” said Patton.

Patton, a nurse and member of a gold star family, seemed most knowledgeable on health care. Her history of working the medical field made her aware of the struggles and concerns of family in the area.

In addition to health care reformation, she believes that her experience also gives her insight to the opioid epidemic and gun violence. After meeting people who have struggled with these issues, Patton wants to work hard to eradicate those issues. She also has experience as a teacher and wants to bring higher paying jobs to the district.

A very passionate teacher, Peters seemed to be the most energetic and intense member of the debate. Causing the most controversy, Peters often called out O’Connor with his statements.

Peters seemed against politicians overall, saying that we need everyday people to serve in politics because they will protect each other. As a teacher who often works with children suffering from hardship, kids were a large concern for his platform.

“My two daughters are playing ‘school shooter’ in the backyard. That’s what they are doing, which is scary. Politicians will not keep our children safe,” said Peters in an escalated tone, pointing at O’Connor.

It was such a heated moment that student moderator Kyle Mares ‘20 said, “I would remind the candidates that this is a civil discussion.”

To which Peters responded with, “I don’t know what’s civil about kids dying.”

With a strong platform that definitely held people’s attention, Peters caused the biggest excitement of the night.

An organic Ohio farmer, Russell took a more inspirational approach to the debate. He talked in a conversational tone more to the audience and less to the moderator. At one point he asked the candidates to raise their hand on if they will support certain topics, including if they would refuse money from corporations and strive to increase minimum wage to $15/hour.

When not every candidate agreed to the statements he read, Russell said, “Not everyone is going to fight for you on these topics, but I will.”

Russell also seemed confident in his ability to talk with Republicans on issues, specifically those who are Trump supporters. He think it is important to recognize our similarities in a time where politics seems heavily divided.

“I know we can reach across the aisle and work together. We’re all Americans and there is a lot of things we can agree on,” said Russell. “It’s about making public investments that guarantee the next generation will be better off than your own.”

Wilson, who can best be described as resembling Robin Williams in Good Will Hunting, seemed to win the hearts of the crowd.

With a kind presence, Wilson said, “If I wasn’t in this race I would have a hard time deciding who to vote for.”

Wilson felt he agreed with much of what the candidates said, but that his own insight would take things one step further.

“Every person has value and worth. A representative must represent all people from the district… you do that by acknowledging your humanity and common values,” said Wilson.

Wilson’s main attraction was he seeming ability to understand people and a willingness to work with the citizens of the district. As a healthcare professional, the issues of the opioid epidemic and universal health care were important topics for Wilson.

Overall, the candidates seemed to agree on several issues, including the legalization of marijuana, gun control and student debt. All concerned on the lack of current representation of the district, due to the resignation, the candidates wanted to stress the importance of this election. This position has been historically held by a Republican.

Voting is available to students who have registered in Ohio for this district. With the eyes of the nation looking to Ohio on August 7, those who wish to have their vote cast should request an absentee ballot for the summer.