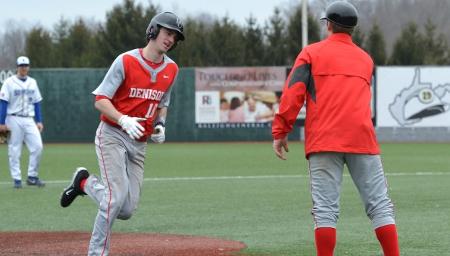 Whether you missed the crack of the bat, warm afternoons at Big Red field, or just the excuse to eat pounds of cracker jacks, the wait is finally over: Big Red baseball is back.  The 2014 season will be Head Coach Mike Deegan’s 2nd at the helm of a roster that is hardly any more seasoned.

2013 Honorable Mention All-NCAC pitcher Connor Murphy and infielder Andrew Touhy are the only seniors on this year’s squad. They each had several key performances in games during the NCAC playoffs.  Last year, the Big Red were sent home early by the Yeomen of Oberlin in a 6-5 extra-inning heartbreaker in Chillicothe, Ohio.

The loss capped off a 25-16 season (3rd most wins in program history) which Deegan and his staff, including newly-hired assistant Ryne Romick are looking to improve on the backs of one of the youngest teams in the NCAC.

“Andrew Touhy and I can cover both the pitching and fielding sides of the ball” said Murphy.  “With such a small senior class, that leads to me taking on a lot of responsibility with our pitching staff, shared by returners Ian Barry and Kyle Colgain.”

Undoubtedly, Murphy and Touhy will be rallying points for the Big Red as they face an exceptionally tough schedule.

If nothing else, Coach Deegan’s 2014 recruiting class is certainly large, as he brought in 16 new names to the Big Red roster.

“This year was very strong,” Murphy said. “[Coach Deegan] brought in a group of players that have a very high ceiling for success and blend in with the culture of the program well.”

Game one was marked by a lineup of vamped Case Western Spartan bats.  Denison pitchers stranded 10 on base, but, with 11 RBIs on 16 hits, outs were hard to come by.  Junior Kyle Colgain threw five innings, giving up seven earned runs, four of which were pushed across in the top of the first.

The Big Red offense would come alive late in the game with the help of junior Charlie Apfelbach’s fifth inning homer and a pair of RBIs from sophomore Brandon Morgan, but it would not be enough as the Spartans would seal the deal with a four-run eigth inning.

Despite the final score, game two against Marietta was a pitching duel until the seventh and eight innings when the Pioneers would widen the gap and cap the game with 3 runs against the reliever Ian Barry.

Jason Byers of Marietta would throw a complete game shutout and would rack up eight strikeouts to silence the Big Red lineup.  The bright spot for DU was the arm of Connor Murphy, who hurled six solid innings giving up only two earned runs.  Look for Denison to change up their approach at the plate after Saturday’s performance.

Three games have been postponed due to weather this season and the Big Red are now forced to wait until March 10th to redeem themselves against Anderson University in Indiana.