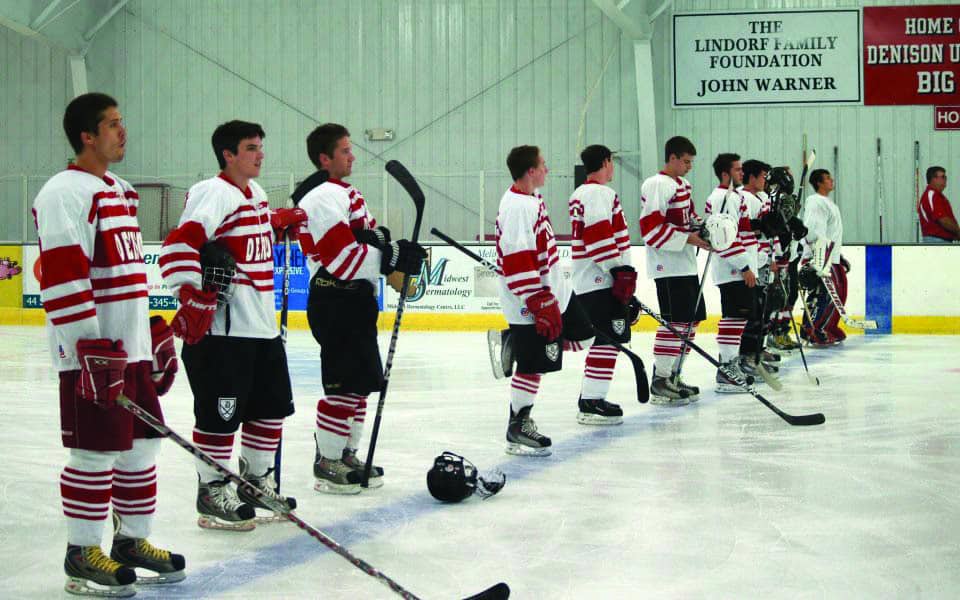 Scott Kepler ‘16 wasn’t ready to hang up his rusty ice hockey skates after high school. In fact, he brought them here, to Denison’s Ice Hockey Club.

“I knew I wanted to play Hockey at DU ever since my high school career ended,” says Kepler, president of the Denison Ice Hockey Club.

For those unaware, the Denison Ice Hockey Club is the exceedingly popular group that entices people from all walks of life into a shared, unified love of the game.

“We get a lot of guys from different groups on campus so it’s nice to play with such a diverse group,” Kepler says.

Kepler enjoys the diversity of the bunch, but the bonds that form between  the group are really what motivates him.

“These guys are like my brothers and I am always glad to go into battle with them on the ice. I can confidently say each one of them is a good pal to have and it has been a great experience to be a part of. ”

“The team dynamic is good. Guys are always laughing in the locker room before and after practice and there’s a lot of good chemistry on the ice because of that,” Kepler says.

“We organize carpools to practice to reemphasize the one team idea with no individuals or outcasts.”

This prevailing idea of no man left behind makes practice seem to be as much fun as it is challenging, Kepler explains.

“Practices are always a good time. We work hard and push each other to make the team the best it can be. Most practices are fast pace to get the blood pumping but we always manage to make it a good time with a lot laughs.”

And while the team may enjoy themsevles during practice, they can also be more determined than ever to get the win when neccessary.

“This is a tight knit group that’s able to have a lot of fun and can get down to business when it has to.”

Speaking of business, the club team did just that last year, when they made it to the championship game of the 70/71 tournament. The team also last averaged 5.13 goals a game with 1.4 goals against.

Kepler led the team in assists with 45, and the leading scorer last year was the now senior captain Tom Krieger ‘15 with 32.

This year looks to be no letdown as the team was able to notch some solid recruits.

“This year we signed a new goalie from Detroit along with 2 defenders from California and the land of 10,000 lakes (Minnesota),” Kepler adds. “We’re happy with the way they have been playing and expect great things from them this year. We also gained a few upperclassmen who have decided to lace up the blades and play for the Big Red.”

Kepler hopes that the new players can help improve the team and push them even further than before.

“I have high hopes for this season, we don’t have as many games as we normally do so it makes it all the more important to get the win each game we play,” Kepler adds. “We’re opening the season this Saturday against a new challenger, Marshall. Haven’t faced off with this club in my years here so it should be nice to see what the Herd can do.”

In addition to Marshall, the team will also be facing off with Xavier, a daunting challenge that Kepler and Co. are more than ready to take on.

“Xavier always has a good team that loves to play fast and direct. Still have a bad taste in my mouth from our loss against them last year so it’s going to be nice to get another shot at them and get a little revenge.”

Xavier and Marshall are just two opponents in a rigorous and hefty schedule.

“We have two games a weekend for nearly every weekend we are on campus from now until mid-February. We play out of the Lou Gibb arena which is about 5 minutes away towards Newark. Hope to get a good crowd for those home games and we’ll do our best to put on a show.”