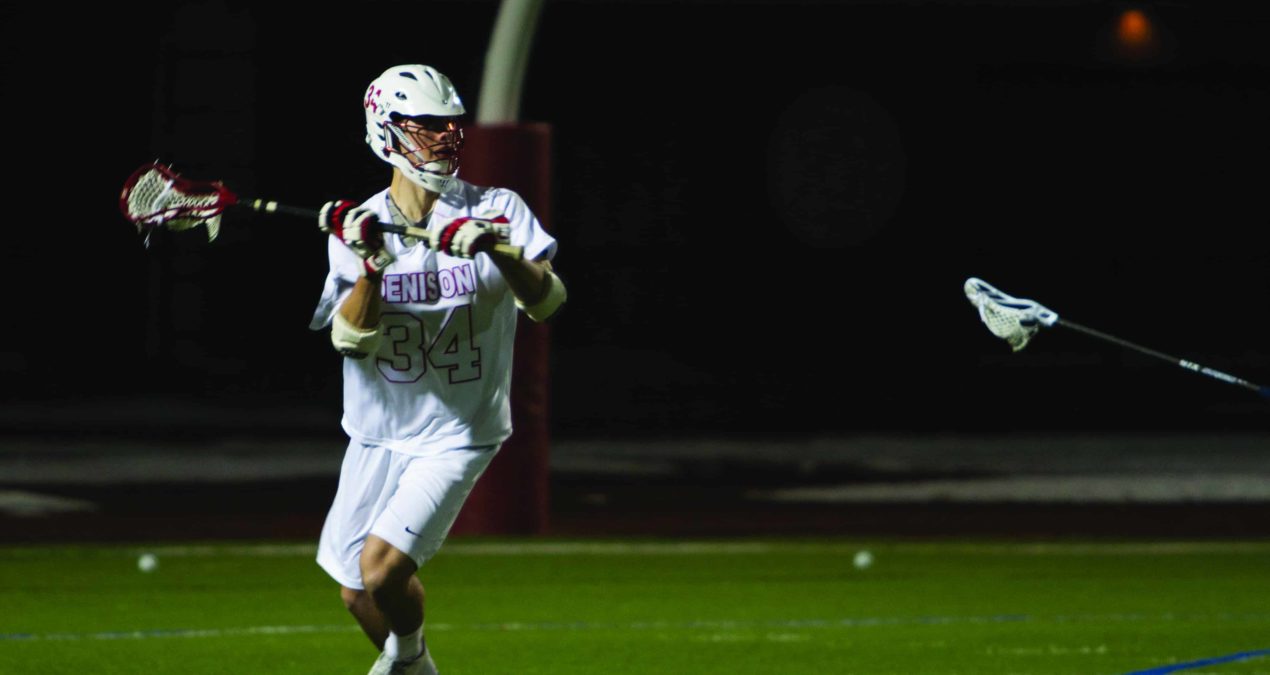 The Denison Big Red men’s lacrosse team made a huge statement by starting the season 3-0 with wins against Mt. St. Joseph’s,  #14 Washington & Lee and #13 Roanoke.

Much of this early season success can be attributed to goalie Chris Thomas ’16, who has stepped up this season.

“It’s obviously a good start for us, winning our first three games,” Thomas said. “The win against Roanoke was especially big because we played Washington and Lee on a Saturday and had to make a quick adjustment for that Wednesday.”

Thomas was recognized for his strong play by the NCAC (North Coast Athletic Conference) after the 11-9 win against Washington & Lee by being named Player of the Week.

“It’s definitely an honor to be recognized by the conference for my play on the field.It’s all about the team but at the same time I really appreciate this honor.”

Thomas does not let the pressure of being goalie phase him.

“Being a goalie, you have to embrace the idea of being under pressure. It’s always great to succeed under pressure, like making a big save in the fourth quarter of a close game.”

Nine days after the 12-4 victory over Roanoke, the Big Red was slated for a two game weekend against Hope College on Friday night at home and a road game against conference rival Wooster on Sunday afternoon.

Becuase the Hope College Flying Dutchmen are relatively new to collegiate lacrosse, the Big Red were not familiar with the team prior to the game.

“We honestly don’t know a whole lot about Hope College due the fact that they are only in their second year as a collegiate lacrosse program,” Thomas said. “But we go into every game expecting that the opposition will play hard and competitively.”

The inexperience of the Flying Dutchmen was evident on Friday night as the Big Red defeated them, 24-2.

The Big Red scored five goals in the first quarter, three of which were made in the first three minutes of the game. Denison scored 15 out of their 24 goals heading into half time.

Thomas started the first half at goalie, posting one save while facing five shots. Goalie Clark Bullington ’16 played in the third quarter and Will Nabors ‘17 took over in the fourth quarter. Both Bullington and Nabors posted a save while they were in action.

The Denison Big Red was supposed to face the Wooster Fighting Scots on Sunday but the game was postponed  to March 26 due to poor weather conditions. The last time Denison played Wooster was last year when they beat the Fighting Scots 10-7 at home.

“The Wooster game will be a tough conference match-up for us as we will travel to their place,” Thomas said. “I remember last year we had a really close win. We expect that this year’s game will be similar to last year’s against them.”