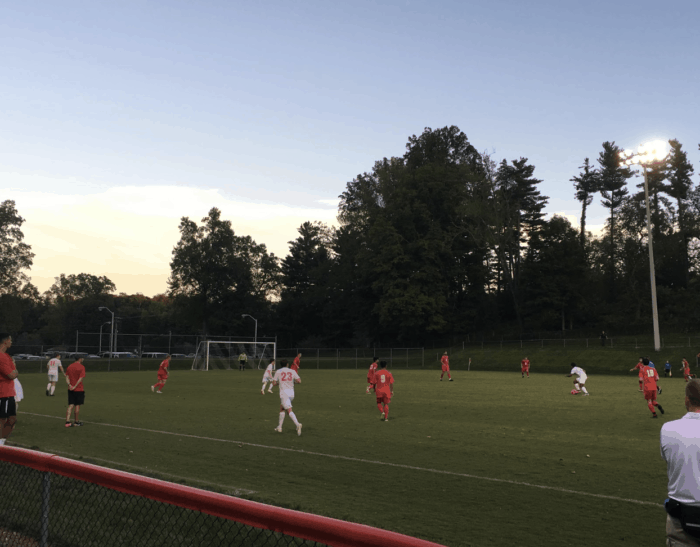 The players stood in two straight lines, Otterbein and The Big Red. The Big Red were jittery and nervous. Just having lost this past Wednesday 3-0 against Capital University, they were desperate for a win.

“It’s not that they played bad. It’s that they needed that little bit of luck,” said Mike Jaben, father of captain David Jaben ‘19.

Unfortunately, Denison Men’s Soccer is still looking for that extra umph this season. Although they put forth a strong effort, the Big Red ultimately fell short against Otterbein by a final score of 1-0. One thing Denison has down, however, is their sense of camaraderie.

They may not have had that bit of luck Wednesday or Saturday, but they certainly had a strong sense of community. Allen Kozak, father of Brandon Kozak ‘19, says this is a “tight team.” They’ve been out of the country, they have even milked cows to bond, he said. These are unbreakable bonds that show on and off the field.

Indeed, the recurring loses, this team has “selflessness, pride in the game, and friendship,” said Kozak ‘19.

This team’s family bonds may not have helped them win but the team worked hard and played a close game, as parents kept screaming “let’s go white” in support of the Big Red. Then five minutes in, Otterbein scored their first goal. It would end up being the game’s only goal and the difference in the Big Red’s 1-0 defeat.

The disappointed Big Red were not giving up, though.

“We need to keep building communication,” says Jaben ‘19, the team captain. The Big Red believe they have a strong bond off the field, but now what’s important is implementing it on the green grass.

The team also will need to including the new freshman in this family. The five seniors have this unbreakable bond, according to several of their fathers. They went on a trip last year to Germany, where they won four out of five games and established the radiating culture we see around this year’s squad.

“We don’t really have one captain. We have five. We all lead together” says Jaben ‘19. Now with freshman joining the team it seams time to rebuild this strong bond.

Braden Adamson ‘22  comments on the adjustment he has had to make through his first several weeks of collegiate soccer: “In high school it was a different style. I like this a lot and I am ready to find my space.”

Although their record drops to 1-5, the Big Red men are a family and they won’t back down. Between the community bond, the skills and that little bit of luck on their side they are looking for, Denison will be looking to bounce back and turn this season around.

Their next opportunity to do so will be this Saturday, September 22 at 2:30 pm against Allegheny.