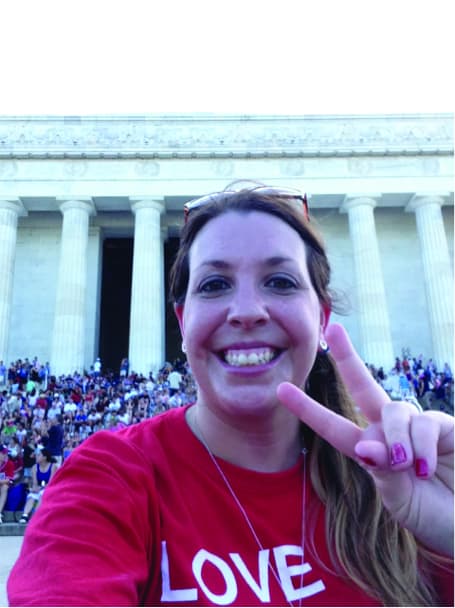 You’ve probably heard the name “Aimee Maczko” somewhere around campus during your time here at Denison, but do you know what she does on a day-to-day basis?

Maczko is the Associate Director of Leadership and Involvement here at Denison. Although she does the majority of her work in her office, located on the third floor of Slayter in the CLIC Office, Maczko enjoys meeting with students at the Slayter Snack Bar for coffee or walking around campus to see some friendly faces.

During her time on The University of Akron, Ohio’s campus she held various leadership roles that molded her to the woman she is today.

Maczko is a member of Alpha Gamma Delta, an international women’s fraternity. Maczko holds many positions including Chapter President and Vice President of Operations and was a member of Rho Lambda, a women’s sorority honor society.

She was also a member of the Order of Omega—an academic society for fraternities and sororities.

While she wasn’t busy with her sorority, she helped with the Zipps Programing Network very similar to Denison’s UPC program. Both programs organize and host special events. Maczko also spent a lot of time with Panhellenic Council, where she served as the Vice President of Judicial Affairs and was a Rho Gamma as well.

She enjoyed her time on this council and loved giving back to not only her sisters, but also all sorority women.

Maczko originally believed she would be a Federal Law Enforcement Agent. Although she majored in Criminal Justice and Political Science, she found a slightly different calling. She stated, “my mentor from the University of Akron introduced me to student affairs.” Prior to working at Denison, she served as the coordinator of student development in El Paso, Texas for six years. “I worked with members of fraternities and sororities and guided their leadership.”

Maczko is now happy at Denison, she says, and loves getting to know the students over the course of her career.

“Mostly, I have enjoyed getting to see the different perspectives from students, and one of my favorite things I have seen this year is when the community came together on campus for the Elizabeth’s Hope Vigil and the support of the Oligo Research Fund,” Maczko explains.

Another part of her job that she loves is the ability to watch the students she works with grow and develop from their first year until their graduation.

The biggest accomplishment Maczko achieved this year is bringing the largest Denison delegation to the Association of Fraternity Life Values (AFLV) conference, held in Indianapolis earlier this semester.

The conference’s website states that this conference “exists to stimulate the growth and development of fraternity/sorority councils, chapters, and members by promoting leadership, education and values based experiences and resources for student leaders, their advisors, and the larger fraternal market.”

The students at AFLV learned many great lessons, as well as many new ideas for the future of Fraternity and Sorority Life on Denison’s campus, and Maczko happily lead such a fantastic group of Denison students through this conference.