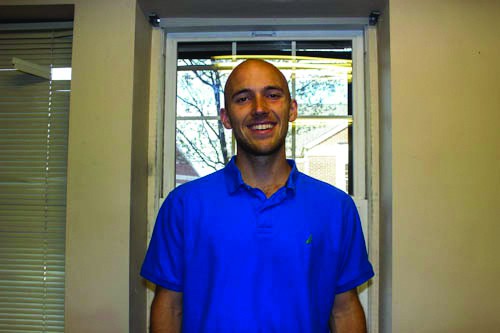 Spencer Greene ‘15 is not your ordinary student. While his time on Denison’s hill has not been easy, he has been a very active, positive figure for our community.

When Greene was in high school, he was diagnosed with a rare brain tumor called oligodendroglioma in August of 2008.

This did not stop him from attending his first two years at Denison, all while going through chemotherapy. Greene notes, “my freshman and sophomore year, I was so absorbed with my current situation, it was hard for me to get involved on campus.”

Prior to this past fall, Greene’s MRI showed that his tumor reached grade three. This prevented him from attending Denison in the fall in order to do radiation treatment.

While going through this process, Greene’s brother, who attends graduate school at Columbia University and also has oligodendroglioma cancer, learned that his tumor had reached Grade Three as well.

For Greene, this induced a wake-up call to not just sit idly by while cancer engulfed his family’s lives.

Action and awareness were calling and Greene had to jump in.

Oligodendroglioma is a form of brain cancer that still has no cure. Oligo Nation, started by Greene and his family in 2010, took off as a leading organization in finding a cure, spreading awareness, and helping survivors.

By the time that Greene decided to institute more philanthropic work into his life, Oligo Nation was already in full swing, but Greene introduced this form of action to the Denison community.

When Greene returned back to campus this past semester, he had a whole different outlook on philanthropy, putting it at the forefront of his Denison career.

As a member of the Sigma Chi Fraternity, and serving as the chapter’s current Philanthropy Chair, Greene has been spreading awareness in various ways.

He began his mission by coordinating with other philanthropic organizations around campus, especially within the Greek community by distributing orange Livestrong Bracelets that support Oligo Nation.

Greene was also a prominent force in the facilitation of Relay for Life, an event that raised over $21,000 for cancer research.

Denison organizations, both Greek and athletic, have been very enthusiastic in supporting both Greene and Oligo Nation. Sigma Chi devoted their major philanthropy event, Derby Days, to Greene’s mission.

Greene said, “While raising money was a huge part of Derby Days through selling T-shirts and activities, the main objective of this week was promoting awareness and participation on campus.” And that is exactly what happened.

Word spread fast across campus of Greene’s story and his organization. Denison has been and continues to be driven by Greene’s motivation, “Doing Well by Doing Good.”

This support was shown through the Denison Women’s Lacrosse Benefit Game. This game was named in honor of Spencer and Oligo Nation, where the team facilitated the entire event, coordinated with local stores in Granville, making the game both a philanthropic cause and a chance to spread awareness.

Even as he continues to battle cancer and balance everyday life, Greene’s inspiring, charismatic, and contagious energy has sparked a flame throughout campus this past semester and will continue in the future.

Participation and awareness for Oligo Nation doesn’t stop here. Greene sells orange Livestrong wristbands that promote awareness for the disease and raise money for the cure.

If you are interested in supporting the cause and purchasing a wristband, feel free to contact Greene at greene_s1@denison.edu, or you can visit http://www.oligonation.org.