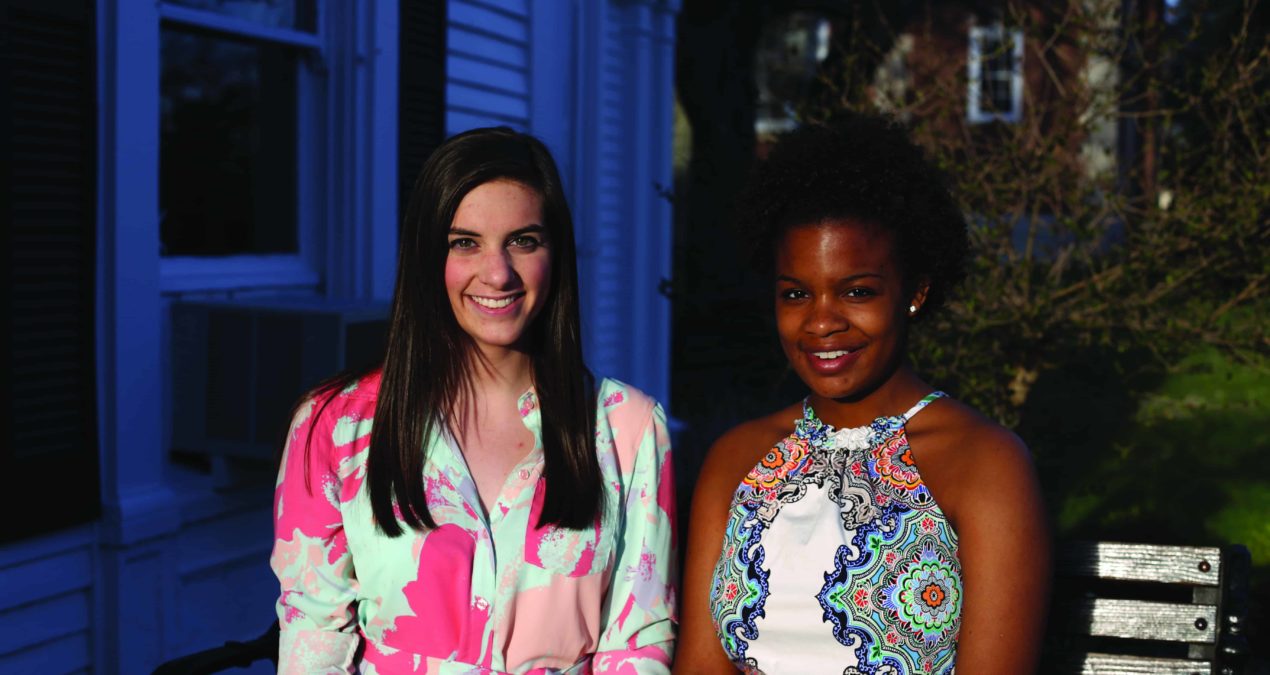 “Before Hung [Tran] even said anything, I started to cry, because I didn’t think I would [win],” Haley Jones ‘17, from Portland, Ore. said.

“I was really nervous because Ana [Morales] said I had won by 2 percent… it was really intense. I was astounded it was that close,” Meghan Pearce ‘16, from Westerville, Ohio said. “I thought it would have been more decided either way.”

Jones, an English, communication double major, is the first freshman in several years to be elected vice president. She said she thought she was elected for her perspective: “I think that being younger played in my favor, because I don’t think I have that much of a biased opinion about much on campus yet. I think people recognize that I can bring something new to the table.”

Pearce, a political science major, history minor, who has served on DCGA since her arrival at Denison, has a different theory as to why she was elected. “I like to think that I was elected because my platform meant something: that it wasn’t just words on a paper,” Pearce said.

As a reflection of recent issues in the student body, both race and gender were factors in the election. Jones said, “I do recognize that it’s a big deal to be not only a woman in office in DCGA, but also a woman of color. To me it’s a really big compliment, and in my experience, it isn’t very common.”

As a female student body president, Pearce has become part of a minority. She said, “I was obviously elated that both of us were elected as women. I’ve been honored to have worked in DCGA under two women presidents, but during that time, the executive team has been mostly men.”

As her post in the Denison Feminists “I Need Feminism Because…” project attested, equal representation of gender in politics is important to Pearce. “It’s something to be aware of constantly in a country where we have 20 percent representation for women.”

Despite the re-vote for the 2015 class, neither Jones nor Pearce think that the results would have changed. Pearce said, “There’s no way for us to tell if our numbers are different, but I don’t think it changed anything.”

“I feel like ultimately, the people who really wanted to vote… were motivated to vote again the second day,” Jones added.

Both Pearce and Jones believe that the upcoming DCGA body has the potential to make real change. “DCGA is going to be a completely different group next year,” Pearce said.

They want to change the focus of the senate to be more reflective of student voices. “We should focus less on getting policies passed and more on knowing our student body,” Jones said. “[When passing policies] it should be ‘we feel very confident voting because we have the student voice to support it,’ and I don’t think that happened this year.”

Pearce hopes to change the relationship between the various members of Denison’s administration and the students, which Jones described as “lukewarm.” She said, “It’s important to recognize that administration isn’t just one big giant body, they’re actually individual people.”

With the rise of the “We Too Are Denison” Facebook group and the recent discussion of the La Fuerza Latina space, diversity has been a hot topic on campus. Pearce emphasized the importance of focusing conversations about campus issues and “moving beyond the pages of the Bullsheet and the Denisonian, moving beyond ‘this is my Slayter box, come talk to me,’ thinking how we can actually bring that conversation to a more personal level. A way to bring all the ideas together would be really useful.”

“We just don’t have enough money to make everyone happy,” Pearce said. She sees the cure to the ailing budget process to be a more thorough look at the organizations on campus. This re-evaluation might also include the reserve fund.

“The conversation we had this year was exciting, but at the same time, $500,000 is a lot of money. We could have done a lot of the projects this year with half that amount, and left that amount over for campus improvement for other organizations,” Pearce said.

For Jones, it’s all about making DCGA more accessible to the students it serves. She said she would like to change the location of the Tuesday meetings, currently held in the basement of Burton Morgan. Pearce, however, suggested that students talk to their senators as a more direct route to change.

The new DCGA duo have many plans, and are excited to get started.

“It’s been amazing to hear ideas that people on campus have for the future. So I’m excited that the future is open,” Pearce said.

“We have DCGA to represent student needs, so I want to hear what everyone else wants to have happen in the future,” said Jones.