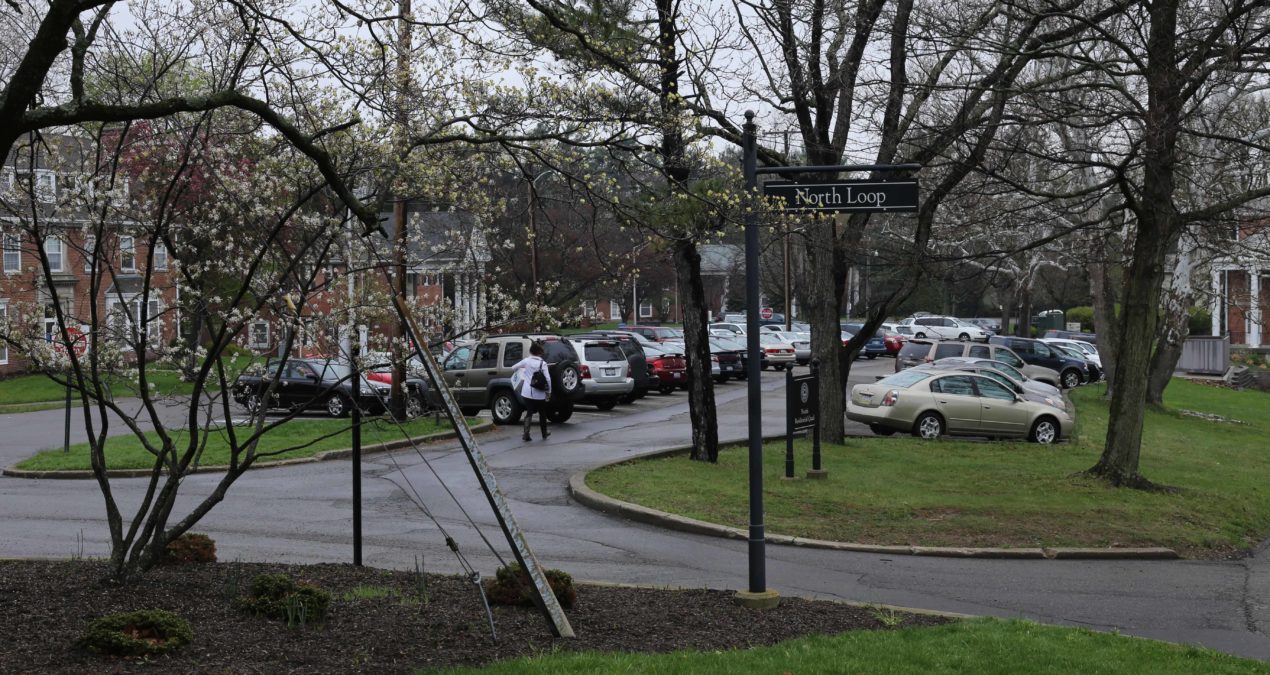 Finding a parking spot can be hard during Black Friday, at an OSU game, and even on our campus. When hundreds of students live in the same dorms and attend class in the same buildings, convenient parking is a challenge.

Some say Denison’s system is due for an overhaul. “With the changes in the dorms that have occurred this year, parking needs to be changed,” said Kayleigh Humphries ‘16, a biology major from Newark, Ohio. “Now that all the sophomores are on East quad and the freshmen are on West quad, there ought to be parking near the dorms.”

The current permit registration costs $100 a year, and assigns a colored sticker to each car based on class seniority. This is a median cost for colleges in this area: an annual parking permit at Kenyon College in Gambier, Ohio, costs $200. Capital University, in Columbus, has a large commuter sector and sells permits for $80, while parking at Case Western Reserve University in Cleveland, can add up to a price ranging from $432 to $1,280 for a prime spot on University Circle.

A less expensive option for Denison, the orange parking pass can be purchased for only $1 for the most distant parking. According to JoAn Matteson, accounting clerk in the Controller’s Office, this aims to fix congestion. “There were more students on East quad than there were parking spots,” Matteson said.

Congestion has gotten to the point where students begin to believe that there is no parking, according to Administrative Assistant of Safety & Security Mary Lindsey. She said, “We have more spaces than we have vehicles. But they’re not always convenient. East quad is a big problem every year.”

Director of Safety & Security Garret Moore has plans to improve the congestion. “I would like two parking permits: blue and green, for the upperclass students and the first years,” Moore said. This would allow students to park closer to the dormitories where they live. The next step will be a proposition to DCGA. According to Moore upperclassmen have conventionally resisted change to the parking pattern.

The permit solution is less expensive than the alternative—mounds of parking tickets and an impounded car. A Denison parking ticket sets you back $40 or $100, depending on the offense, while a Granville citation costs $20. Moore said the cost adds significance to Denison tickets: “If our tickets were that little, students wouldn’t be concerned about them at all.”

The consequences of a village citation can be much more expensive. The ticket must be paid or taken to court, and if the car is not moved, it will be towed.

On Denison’s campus, towing is a last resort. According to the Controller’s office, around 1,100 parking citations are issued each year, and Moore said only three or four of those cars are towed, after five parking violations have been cited and the owner does not remove the vehicle from campus.

Instead of paying the citation on their account, students have another choice: filing a citation appeal with security. The Controller’s office and security review the citation, and possibly reverse it and refund the fee.

Matteson, who helps process the appeals, sees many parking citations successfully reversed. “So many of the tickets are reversed, it feels like it’s all for nothing,” she said.

Changing the parking pattern would reduce the number of citations, according to Moore. But there is another route to reducing the number of citations—increasing students’ willingness to walk. “We’re into sustainability, we want people to walk,” Moore said. And the Hill itself is not hospitable to cars. “We’re not a drive-to-class campus,” Lindsey said.

Karen Osborne ‘16, a psychology major from Cross Plains, Tenn., has commuted to an off-campus internship on a biweekly basis and learned to live with the current system. “People should suck it up,” she said. “They can walk five minutes to their car.”