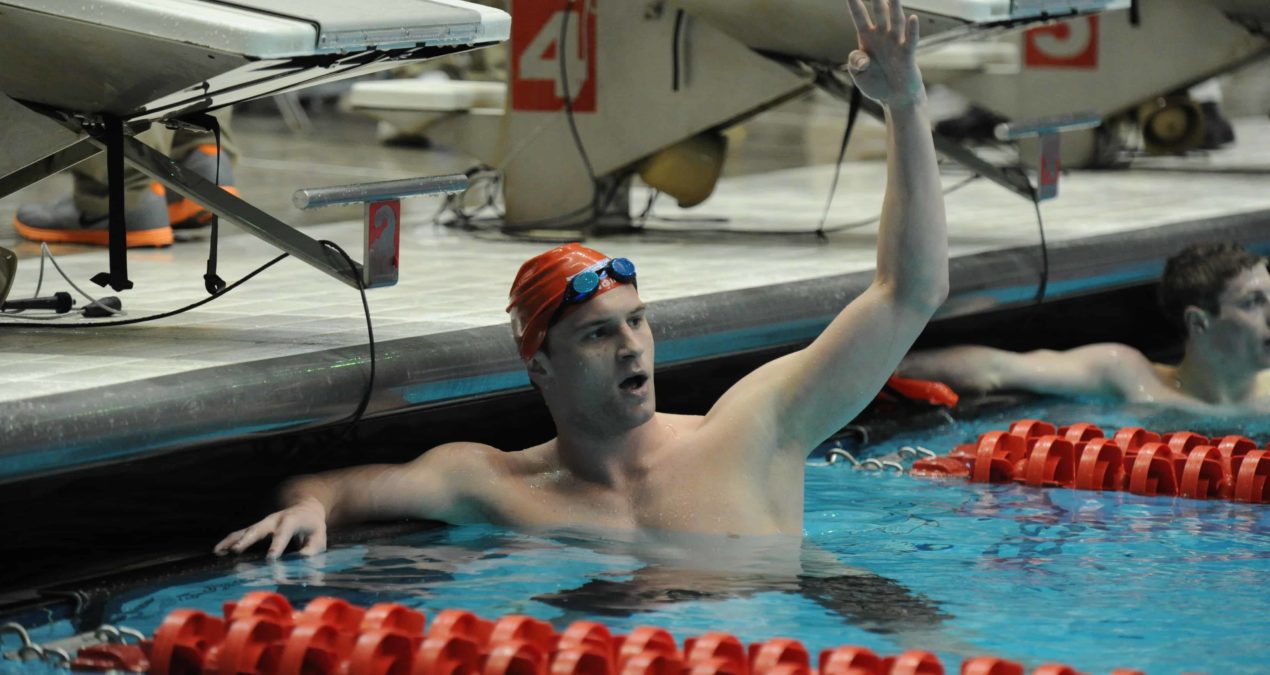 The men’s and women’s swimming and diving teams competed at the NCAA Division III National Championships, March 19-March 22, which were held in Indianapolis, Ind. The men came in second to crosstown rival Kenyon in a nail-biter. The victorious Lords defeated the Big Red by eight points, 480-472. The Big Red women found themselves in the top-5 for the eighth consecutive year with a fourth place finish. The women came 15-points shy of a third place finish, with 374 points. Emory University tallied 595 points to win the meet.

“Going into the meet we knew that it was going to be hyper-competitive,” head swim coach Gregg Parini said. “We knew going into the meet that we would be against some very good competition, and with perfect meets on both sides, we had the ability to win both meets. But with most championships it wasn’t perfect.”

Heading into the final day of competition at the national championships, the Big Red men held a 28-point lead over rival Kenyon. However, as is typical of championships, not everything went according to plan.

A loaded field in the 200 breast stroke    swayed the point tally in Kenyon’s favor, with the Lords prevailing over the Big Red by eight points.

In the opening day of competition, Al Weik ’14 and Connor Dignan ’15 captured individual event titles. Weik, the national record holder in the 500-yard freestyle and 1,650-yard freestyle, won the 500 freestyle for the third straight year with a time of 4:24.31. Weik also won the 1650 on the last day with a time of 15:05.60. Weik became the first male in Division III history to win the 1,650 in four consecutive years.

“As a freshman, winning the 1,650 was pretty cool and I really realized that I had a chance to win it four years in a row, so I’ve been keeping that in the back of my mind for a while,” Weik said. “The 500 is a harder race for me so that was pretty special as well. It was exciting, and it felt really good to try and put my team ahead as well.”

Dignan, who set the national records  in the 1-meter and 3-meter dives at the conference championships earlier this season, captured his first career national title after winning the 3-meter dive with a meet record score of 613.90.

On the penultimate day of competition, the Big Red sat out of the first two events, giving Kenyon a brief lead in the standings. However, Damon Rosenburg ’15 finally kicked off competition for DU in the 100 breaststroke. Rosenburg, the national record holder in the event, posted a time of 54.65 to take fourth.

Three Big Red divers qualified to the final of the 1-meter dive: Dignan, Levy and Ben Lewis ’16. Dignan found himself in eighth place after the judges ruled his final dive incomplete, resulting in a final score of 465.20. However, teammate Lewis, who won the event at last year’s championship, came away with a second place finish (521.75). Lewis’ score was just 1.20 points behind champion Johann Schmidt of Tufts University. Levy finished in fourth place with a total of 508.50.

The foursome of Maciel, Spencer Fronk ’14, Joe Brunk ’16 and Weik banded together to record a second place finish and a time of 6:33.39 in the 800 freestyle relay. Ryan Fleming ’16, Conrad Wuorinen ’16, Fronk and Maciel swam a combined time of 2:58.67 to place second in the 400 freestyle relay on the final day of competition. “The men’s meet result is probably the most painfully disappointing meet I’ve ever been a part of, simply because we had the lead until the last event and with a couple critical mistakes earlier in the first two days, those mistakes came back and haunted us,” Parini said. “We made a couple mistakes that proved to be costly for us, and that’s why it’s a national championship.”

Carolyn Kane ’17 posted the top performance of the first night with a career-best time of 23.27 in the 50 freestyle en route to a third place finish. Campbell Costley ’17 and Taylor Johns ’16 placed fourth and sixth, respectively, in the 500 freestyle. Molly Willingham ’15, Lugg, Ashley Yearwood ’16 and Morgan Nuess ’14 finished third with a time of 1:43.59 in the 200 IM relay.

Michelle Howell ’15 earned the top finish for the women on the second day of competition. Howell placed third in the 400 IM with a time of 4:20.96. This was her third-consecutive top-3 finish at the national championship.

Two relay teams placed third on the second night. Kane, Mary Van Leuven ’16, Yearwood and Nuess placed third in the 200 freestyle relay despite dropping nearly half a second from their preliminary time, which had them seeded first heading into the final. The foursome posted a time of 1:32.83. Willingham, Lugg, Howell and Kane swam 3:45.14 to take the bronze in the 400 medley relay.

Lugg’s championship in the 100 breaststroke highlighted the third day of competition. The senior earned the first national championship title of her career in addition to posting a school record time of 1:02.27 in the event.

“Honestly, it was unbelievable, because it was my first time ever winning anything in swimming, and especially as a senior, I wanted to go out with a bang,” Lugg said. “It was definitely a surreal moment for me. I can retire without having any worries about not doing well enough or letting down my team.”

Lugg also ended her swimming career with a varsity record and fourth place finish in the 200 breaststroke (2:16.29).

“Natalie, winning the 100 breaststroke, boy oh boy what an inspiring swim, what a true north swim. Natalie has been focused and on task all season long,” Parini said. “She’s led a remarkably honest season in terms of training and preparation and she took advantage of the field and buried them on the last 25 yards. And then to turn around and swim a varsity record in the 200 breaststroke on the last day was huge.”

In a practice the week before the meet, Parini passed out notecards and had each swimmer write down one thing that they would bring to the championship meet.

Lugg said that she wrote down that she would bring “comic relief” along with her.

“I always went back to telling [my teammates] the story of my Facebook name. On Facebook, I’m Natalie Gooey-Honey Lugg, and everybody always asks me about the ‘Gooey-Honey thing,’” Lugg said. “A lot of my teammates came up to me and they were like ‘distract me because I’m getting nervous’ and I’d ask them if they knew the story behind it.”

*The Denisonian documented the swim team’s preparation for nationals here.

March madness is here, get your brackets ready