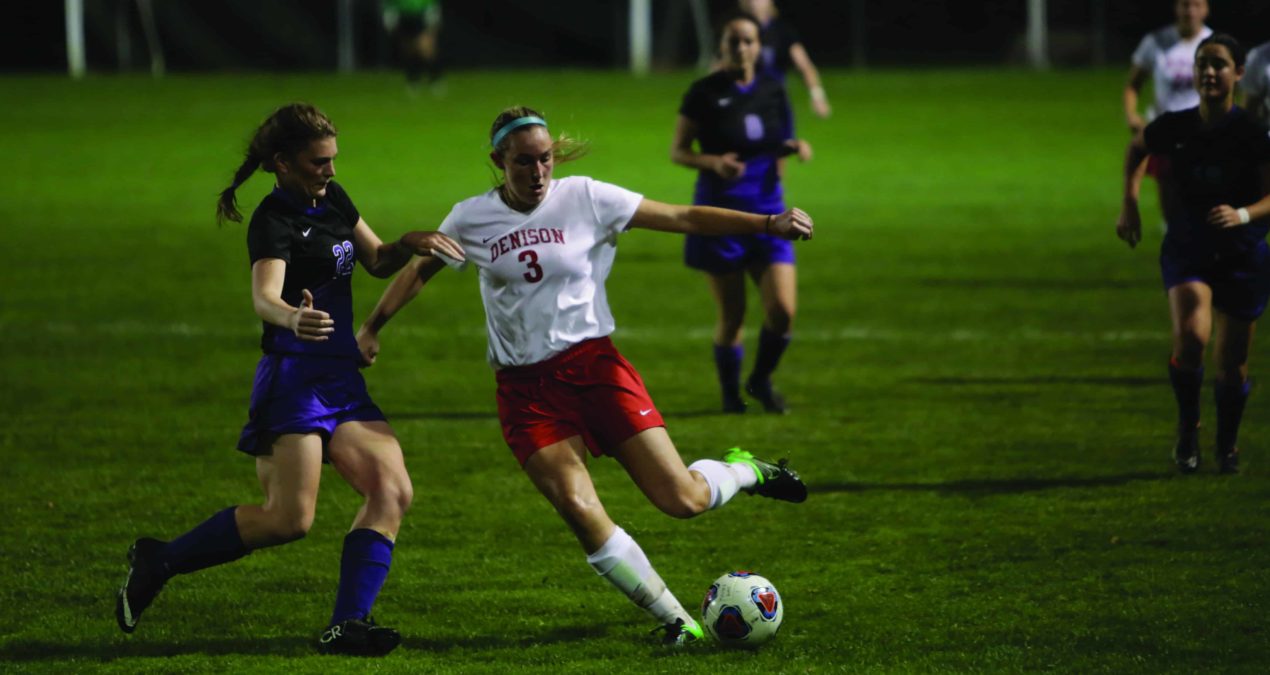 The results are in and the women’s soccer team’s fate has been decided.

After a stellar 15-4 season, the Big Red will challenge the Bulldogs of DeSales on Nov. 14 in the Division III playoffs.

Though the month started with a 1-0 nail biter victory over Kenyon in the NCAC semifinals, the tournament culminated in a disappointing 2-0 loss to the Tigers of DePauw on Nov. 7.

The game against Kenyon was evenly matched from the opening whistle.

Through the first 35 minutes, DU took three shots to the Ladies’ two, but both defenses were able to limit opportunities and clamp down on any offensive moves.

In the 38th minute, the Big Red were awarded a free kick, which was taken by Drew Wentzel ‘18. The defender struck the ball toward the back post and found the head of forward Meg Wozniak ‘18, who smashed the cross in for her sixth goal of the season.

Both defenses held firm and Wozniak’s header would prove to be the only score in the DU victory.

Denison’s offense outshot Kenyon 13-6 and spread the opportunities among eight different players. Wozniak emphasized the importance of the team’s collective ability rather than the ability of a small number of key players.

“We’ve learned that playing as 11 individuals on the field isn’t the way we’re going to win games,” the forward said. “Every game counts and we’ve definitely tried to have the mindset that every upcoming game is the most important game.”

“Like we’ve done all season we’re gonna work to focus on the little details and the big things like the wins will come.”

The triumph over Kenyon in the semifinals sent the Big Red to the final match of the NCAC tournament against DePauw in Greencastle, Ind.

The Tiger offense need no more than seven minutes to score usually stalwart Denison defense.  DePauw managed to take advantage of a failed clear and to take the lead early.

Even though the Big Red offense outshot their counterpart 10-2 in the first half, they were held scoreless, while the Tigers were able to convert on both of their attempts. DePauw’s 2-0 lead would survive and the team would be crowned 2015 NCAC champions.

Following the difficult loss, Wozniak and the squad have attempted to shake off the tough defeat and focus on the next challenge.

“At practice we’ve been focusing on working as a unit and learning to cover for one another and communicate defensively,” Wozniak said. “We’ve had a specific routine with pre-game practices that we like to stick to so that we can be prepared.”

“This season I think our greatest strength has been our many outlets for attack. If you look at the team stats, the goals and assists are so equally distributed that it makes it nearly impossible for other teams to know how to prepare to play us.”

The Big Red will look to rebound in their first match of the NCAA tournament against DeSales on Nov. 14.