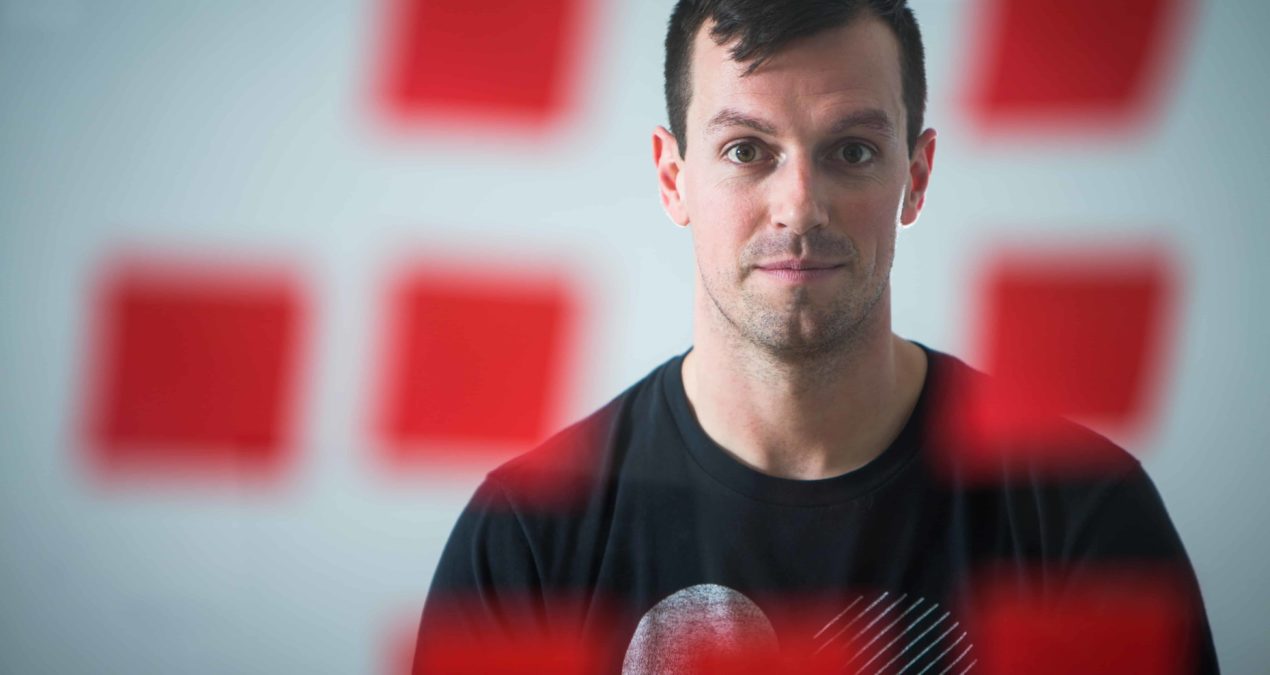 Over the last few weeks Denison alumnus Zack Brown ‘05 has raised, through the online crowd-funding platform Kickstarter, over $61,246 to fuel this very endeavor (see it here). “Basically I’m just making potato salad,” reads his campaign description. “I haven’t decided what kind yet.”

Brown launched the campaign on July 3 as a joke that “spun out of control so fast,” he says. The entire endeavor initially stemmed from an off-the-cuff comment by Brown’s girlfriend, who now has to balance two separate jobs along with helping to organize Brown’s newfound celebrity life.

Since then over 6,200 people from over 20 countries have backed the potato salad, including celebrities such as Scandal’s Joshua Malina and comedian Orlando Jones. The story was quickly picked up by the national media, and shortly thereafter Brown was interviewed on CNBC’s Closing Bell, ABC’s Good Morning America and Fox Business.

Funding for the campaign will continue through August 2. Brown talked with The Denisonian about his own Denison experience, how the potato salad joke started, the advantages of crowdfunding and using his funding as a vehicle for charity.

(Have a few minutes? Listen to Sports Editor David Allen’s full interview with Zack Brown below.) A screenshot of the potato salad campaign’s Kickstarter page. By July 20, Brown had raised almost $62,000, backed by almost 6,100 individuals from over 20 countries. Courtesy of Kickstarter.

“Denison gave me so many opportunities”

Brown grew up in the Columbus suburb of Upper Arlington, the son of an opthamologist and a nurse. He was the oldest of three brothers and began his Denison career in 2001. He entered as a computer science major but after getting a D in a computer science class his sophomore year, he switched to biology and focused on a pre-medical track.

“I wasn’t a great student,” he admits, “but Denison gave me so many opportunites. I ended up doing so much there that I think I ended up being distracted from my studies.”

Brown played varsity football and club lacrosse and served as a senator in the Denison Campus Governance Association. But he says some of his best memories come from his experience in founding a new club at the time: the Denison Democrats.

Although the club is today the largest student political group at Denison, founding it his junior year was no easy task, Brown says.  “[The College Republicans] were much bigger than we were when I started,” he explains. “I remember getting the feedback from professors and people…down in Granville, like, ‘Well, good luck, because it’s a conservative campus.’”

The club became a success, however. Brown remembers hosting former Governor of Vermont Howard Dean for a mere $5,000 honorarium as a high point.

Brown harbors no major political ambitions today. “I see stories, I get upset about them, and then I try to forget that I ever cared about politics,” he says. Although he does not identify as a Democrat today, “I am definitely a liberal,” he says.

Brown spent his first few years after Denison interning in Washington, D.C. for the United States Public Interest Research Group, which describes itself online as “a consumer group that stands up to powerful interests,” including “big banks, insurers, chemical manufacturers and other powerful special interests.”

He then did stints at other non-profits before joining a software firm and eventually co-founded his own software company, Base Two, in the Short North neighborhood of Columbus. Base Two’s five-man team, Brown and four colleagues, provides services in web and app design and development to clients.

When asked about the success of his start-up, he responds, “It’s successful enough that I can take a few weeks off to talk about potato salad.”

“Spreading joy around the world is pretty cool”

“I really like making jokes,” Brown says. “That’s something that me and my friends do very well. We’re always trying to one-up each other.” The potato salad joke itself began the week of July 4.

“We were all goofing off at work…on G[mail]-chat,” Brown explains, “and somebody was making some pretty solid jokes about potato salad. I just interrupted it with a link to the Kickstarter, and that was the win.”

Brown came into work the following day to an email from Amazon Payments indicating his “bank account was verified.” He then followed through on the joke and greenlighted the campaign under the moniker Zack “Danger” Brown.

Initial expectations were minimal. “I thought my friends — like, the seven or eight people I’d been joking with — would all toss in ten bucks, and then I’d have 80 bucks to buy beer and throw a party, right?” But the reality soon set in.

“At day one, we had 200 dollars,” he recounted on ABC’s Good Morning America, “and I thought that was way too much money. I was overwhelmed at the idea of making 200 dollars worth of potato salad.”

And it didn’t stop there. Within days the campaign had gone viral on social media, and then in the press. By the time of Brown’s July 8 appearance on Good Morning America, over $35,000 had been raised for potato salad. The average contribution, according to Brown, is $8, but campaign webpage notes that 17 donors have contributed over $110. The overwhelming majority of donors have contributed less than $3.

Brown credits the appeal of the potato salad campaign to its satirical nature. “I think part of why the joke landed was that…it’s really like an Ellen DeGeneres joke,” he explains. “It’s not super-sharp, it’s not super-controversial, it doesn’t push the envelope at all, so people see it and they’re like, oh that’s cute.” He cites the international funding he’s received as testament to the campaign’s humorous universality. According to ABC’s George Stephanopoulos, by July 8 Brown had received backing from individuals in over 20 countries, among them are Norway, New Zealand, Thailand and Colombia.

“There’s a real genuine part of me that’s saying, ‘I’m so happy I did this because spreading humor and joy around the world is pretty cool thing to say you’ve done, even for a second,” Brown says.

But the Kickstarter campaign did come with “stretch goals” and promises, such as the promise of “rent[ing] out a party hall and invit[ing] the whole internet” for a potato salad party if $3,000 was raised. Brown is currently brainstorming creative ways to fulfill these promises, such as partnering with a food company to sponsor a cross-country or perhaps even international trip throwing potato salad parties.

Luckily, some new friends may be able to help him out. Orlando Jones, for example, reached out to Brown and has already volunteered to perform stand-up comedy at the Columbus party, Brown says. Number of Brown’s potato salad funders by amount of money pledged. The majority of backers pledged between $1 and $2 to the campaign.  Kristóf Oltvai/The Denisonian

“There are few causes that are worse than this”

But the idea of a $60K salad is not without its critics. The A.V. Club, for example, an entertainment website affiliated with The Onion, begged netizens not to support Brown’s campaign. Denison students are among the skeptics.

“I hope that of the thousands of dollars he’s obtained will be used for something more helpful or constructive than a giant party for potato salad,” says Sara Blike ‘15, a theatre and creative writing major from North Canton, Ohio.

Kelsey Hagarman ‘15, an English major from Pittsburgh, Pa., could not agree more. Brown’s success, she says, “seems to have more bearing on the purpose of Kickstarter than on Denison as an institution…For better or worse,” she continues, “Kickstarter deems projects ‘creative’ and worthwhile if they receive funding, no matter how quirky or trivial the projects may seem.”

Brown, now on crowdfunding panel for CNBC news, is sympathetic to such views. “I understand the reaction, right, I can understand seeing it and saying, ‘Holy sh*t, I can’t believe people are throwing money away at this,’” he says. “There are few causes that are worse than this,” he admits.

But he is still adamant his real goal remains the joke.

“What this ended up being an upside down model for telling a joke. Comedians will charge money for doing a show, you show up and they tell jokes. You pay before you ever saw a joke. [Potato Salad] is the joke up front and then throw me some money..”

He intends to remedy some of the poor reactions by using the funds to support charity work. Requirements for what a Kickstarter user can do with the money he receives “are not that strict,” Brown explains. After contacting Kickstarter in person, he realized that “you can do whatever the hell you want” with the money once the funding period ends. It is only soliciting specific charities on a Kickstarter webpage that is prohibited.

“This is going toward the greater good,” Brown says. “We’re in the process of identifying a charitable vehicle….hopefully something Columbus-based.”

Brown mentions the possibility of creating a fund of $10,000 to
$15,000 at the Columbus Foundation where Brown envisions 10 percent interest each year being annually directed toward “charities dedicated to stopping hunger and homelessness,” he says.

This way, Brown says, the money raised could be used to fund charities “forever.”

“The crowdfunding route is great”

Brown describes Kickstarter’s support with his campaign as “super awesome. They’ve been really nice,” he adds.

He recommends the platform and its methodology. “As a funding platform, I think it’s great.” And even though he knows he’ll use up a lot of the money on fulfilling promises, Brown still feels platforms like Kickstarter have advantages over more traditional fundraising methods like recruiting a group of big-monied investors. “The great thing about something like Kickstarter,” he says, “is your campaign ends and you have, presumably, this injection of cash into your business, but you don’t owe anybody any equity.”

With more traditional models, “you’re at the behest of what investors want,” Brown explains. “The crowdfunding route is really great,” he says, “because you end up still having full creative control of your company at the end. You don’t have anybody edging in and saying, ‘Hey, you should spend this money doing x, y, and z.’”

“No outside investors played any part in this potato salad,” Brown affirms with a laugh.

Maybe not, but the many thousands who have contributed to the campaign can rest easy knowing that, through charity, Brown’s potato salad will probably end up feeding much more than just internet humor. The joke is enough in itself for him, though.

“Spreading humor and joy around the world has been one of the most rewarding experiences of my life.”