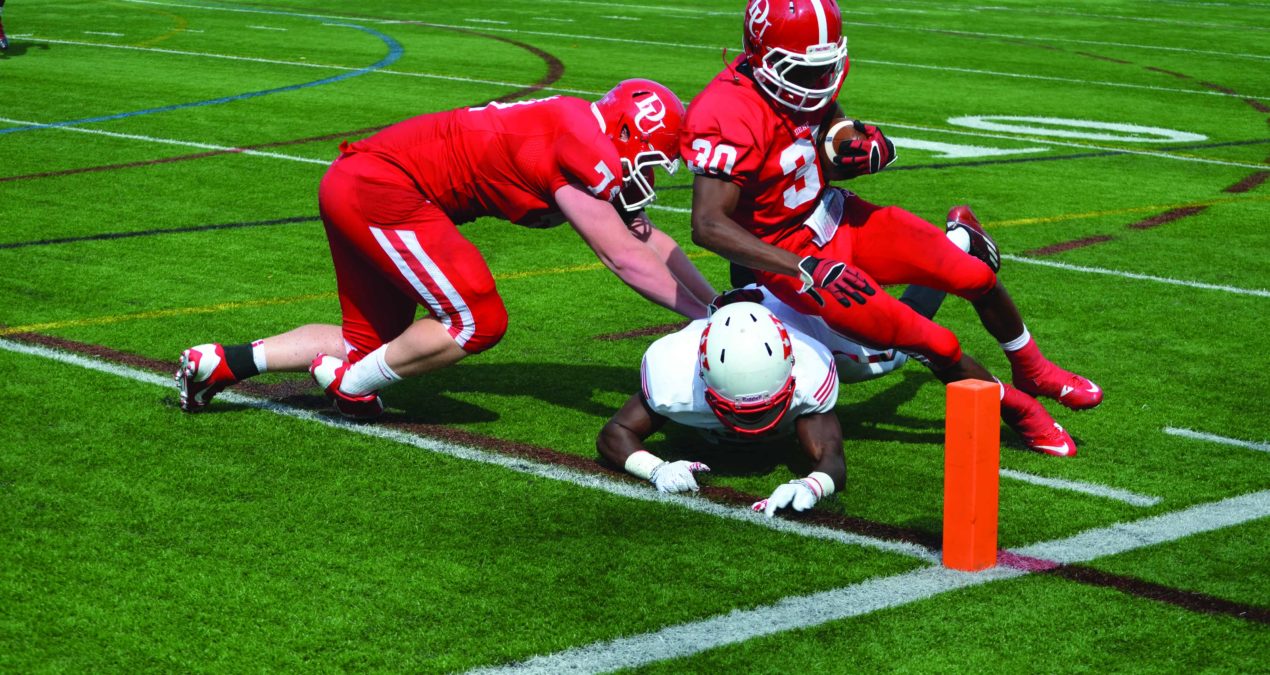 Denison looked to get back to their winning ways over the weekend after dropping a road contest against Hiram in Week 2. Instead, the Big Red is headed back to the drawing board after a sound 31-12 defeat at the hands of the #13 Wabash College Little Giants.

The contest was played tightly at the beginning, with Denison (1-2, 0-2 NCAC) marching down the field on a 14 play, 50 yard drive, implementing a nice balance of running game and a smart aerial attack to get on the board first, a 3-0 lead off the foot of senior kicker Matt Puracchio ‘14 at the 9:14 mark of the first quarter. Wabash would answer, however, with a field goal of their own, knotting the score up at 3 apiece with 2:53 left in the first quarter.

Denison had chances to deny Wabash, with their defensive front getting pressure on Wabash quarterback Michael Putko early and often, and coming within inches of three turnovers on the opening drive alone. However close they might have been, the score was still 3-3 at the end of one quarter.

The second quarter saw Wabash’s offense begin to pick up steam, as they began to run the ball at will, putting Denison into a bind early, with field position and momentum, slowly swaying to the opposition.

Defensive back Alex Willingham ‘16 may have had the defensive play of the game however, going airborne to nab an interception, and snuff out a long drive for Wabash, setting up Denison nicely inside Wabash territory, on the 45 yard line. Denison would retake the lead again with another field goal, going up 6-3 at the 10:57 mark.

It was here however that the Denison offense began to stagnate. Wabash looked to the deep ball, Putko finding receiver Sammy Adams down the field for a 45 yard gain, setting them up nicely for a first and goal inside the Denison ten-yard line. Wabash would punch it in for an easy score, going up 10-6 at 10:02 of the 2nd.

Denison had no answer, multiple possessions resulting in missed 4th down conversions, and punts. Wabash would close out the first half with another touchdown, Putko finding receiver Drake Christen in the end-zone, taking a 17-6 lead into the locker room.

Nursing a three-possession lead, Wabash went to the ground, alternating between Mason Zurek and Tyler Holmes while chewing up positive yardage and clock.

As the time expired in the third quarter, Zurek would score his second TD of the game, this time on a 26-yard run, making the score 31-6. Zurek would finish the contest with 112 yards on the ground, while Holmes would finish with 104 yards of his own.

Denison would score its lone touchdown in the fourth quarter after four-straight completions by Sklenar of over 13-yards. With the ball on the Wabash 9-yard line, Sklenar would call his own number and reach the end zone.

Denison would complete the 2-point conversion, but a 15-yard clipping penalty would push Denison back to the Wabash 18-yard line. The second PAT attempt failed, setting the eventual final at 31-12.

Sklenar was 28-of-45 for 241 yards through the air, while also rushing for 23 yards on 15 carries. Jordan Patterson ‘16, making his first career start, led DU on the ground with 49 yards on 13 carries and added five receptions for 51 yards. Dushawn Brown led the way with nine receptions for 62 yards and Hunter Winans chipped in six catches for a team-high 75 receiving yards.

Putko was 14-for-21 for 177 yards and two touchdown passes. He was sacked by the Denison defense five times. Zach Neufeld posted two sacks and two forced fumbles for DU.

Houston Hodges led Wabash in receiving with six catches for 44 yards. Austin Brown led the team in tackles with 12.

For Denison, the defense was paced by safeties Andrew Baird ‘17 and Zach Pewitt ‘16 who each ended with 10 tackles apiece.

Pewitt added one sack and two tackles for a loss. The loss on Sept. 20 ended a few streaks for Denison, snapping a 9 game streak of scoring 20+ points, dating back to September 2013, and also snapping a 5-game home winning streak, also dating back to September 2013. The Big Red officially enter “Rivalry Week,” as they take on the Battling Bishops of Ohio Wesleyan University on Sept. 27, at 1 p.m. in Piper Stadium.