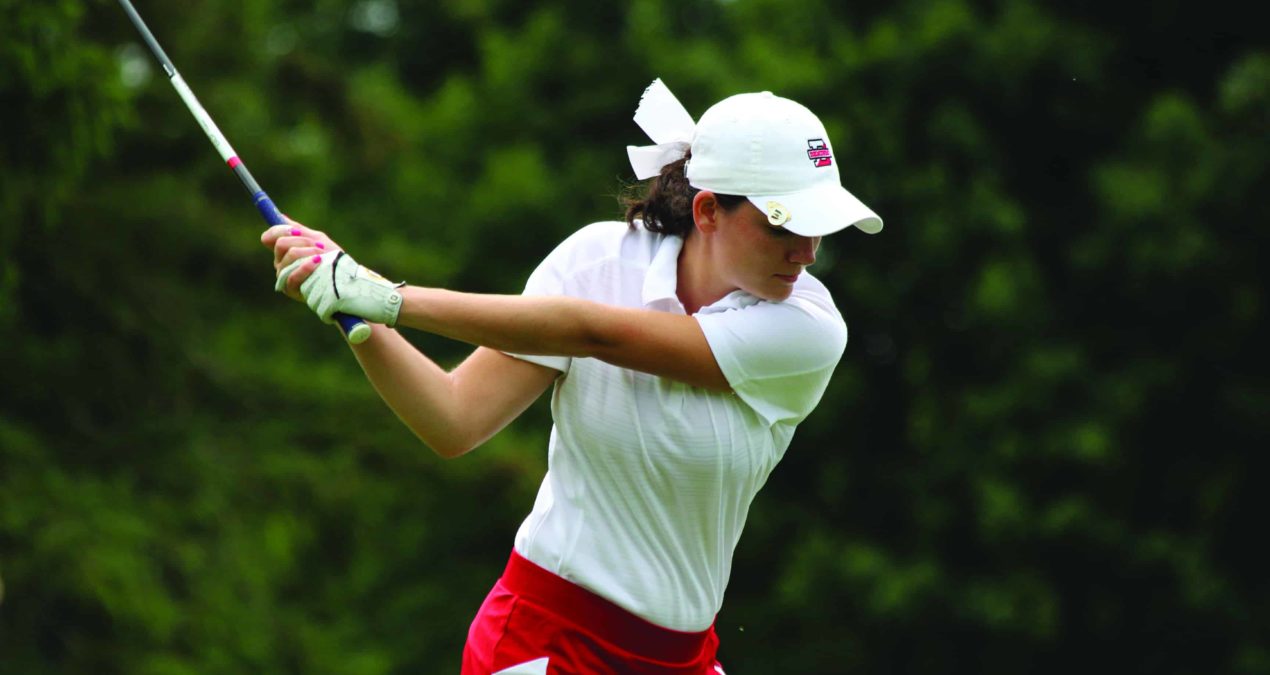 The women’s golf team finished in fourth place at the Denison Fall Invitational on Sept. 6-7.

DU posted a two-day total of 669 which landed them 13-strokes in front of fifth-place Wooster, and eight shots behind third-place Bridgewater.  The team title went to Wittenberg University, who ended with 637 strokes.

Even though this was the first invitation of the season, the Big Red felt as if they were more than prepared to start the season.

“We’ve all been practicing over the summer so that we can get off to a good start! I personally have been trying to be more consistent with my swing, so hopefully the work will pay off!” Tina Berardi ‘17 said.

Beraldi ultimately checked in at third for Denison, and 21st overall in the tournament with an 85 on Sunday.  That bested her first day total by one stroke. She birdied the par-5, sixth while tallying four pars.

Stacey Adams ‘15 (pictured) paced the Big Red. She notched a top-5 finish by posting back-to-back rounds of 80.  On Sunday, Adams posted a birdie on the par-5 10th hole, to go along with 10 pars.  Her two-day total of 160 landed her in a tie for fourth place in the field of 102 golfers.

Brynn Fitzgerald ‘16 followed Adams with a tie for sixth-place after an 83 on Sunday.  FitzGerald’s round included eight pars on her way to a two-round total of 161.

Sophie Kollin ‘18 rounded out Denison’s top-four on the final day with an 89.  Denison’s final score went to Sammy Seibel ‘17 who followed her 90 on Saturday with a 91.

Playing as an individual, Courtney Jones ‘17 finished in a tie for 13th overall after firing an 87 on Sunday.  Jones’ 81 on Saturday was the lowest round recorded by an individual in the tournament.  Alexandra Mills ‘17 tied for 38th overall with an 89, and Linnea Wethekam ‘17 carded a 91 on Sunday. Rebecca Rabb ‘15 rounded out the Big Red’s scoring with a 98.

After a solid weekend, expectations for the Big Red will remain high coming off of a stellar 2013-2014 season, which saw various top-5 places in nvitationals.

Denison will return to action on Sept. 20 when they travel to Greencastle, Ind. for the DePauw Small College Classic.