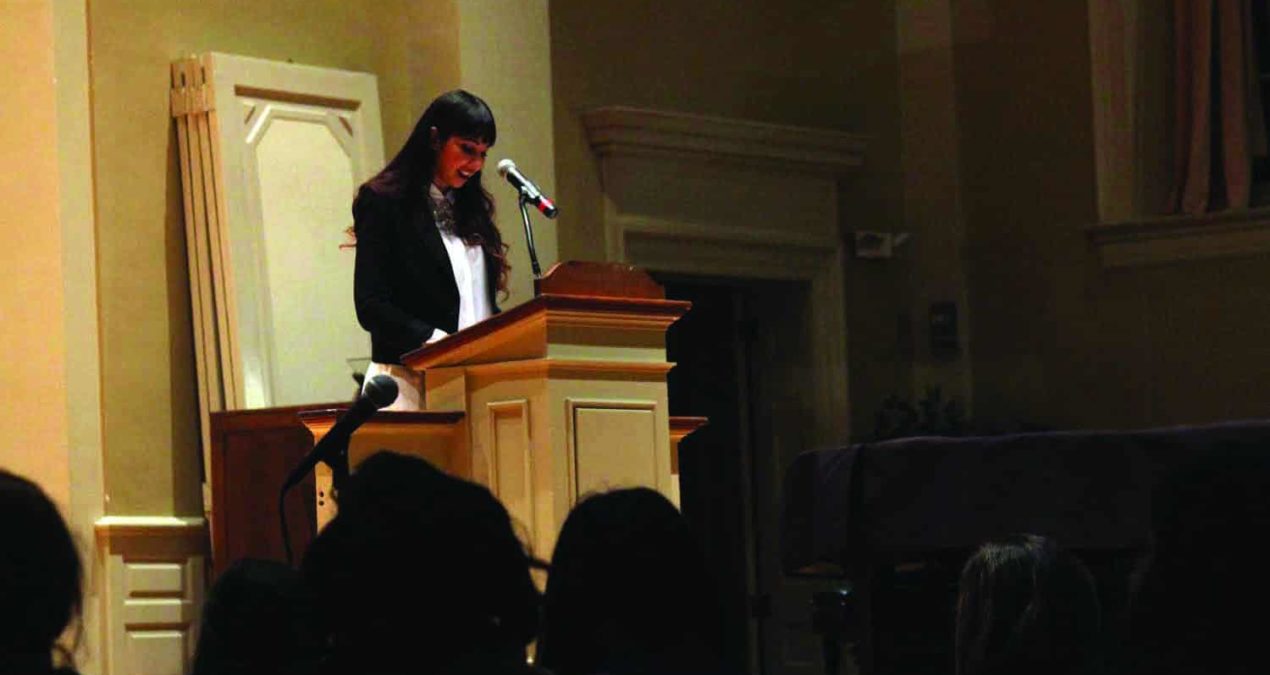 Orange is the New Black’s Jackie Cruz inspires and impresses

While Jackie Cruz is probably most recognized for her role as Flaca Gonzalez from the hit show Orange is the New Black, the two are anything but similar.  When the comedian visited Denison Nov. 5, in addition to the sleek black blazer replacing her character’s usual orange jumpsuit, Cruz’s mild, soft-spoken, and witty demeanor differed from Flaca’s personality, which is intimidating and hotheaded.  Despite these differences, Cruz noted that the show’s writers create the characters “for the actors,” and laughingly admits, “there is a little Flaca in me.”

In addition to her role on Orange, the 23-year-old Cruz has released an EP and has been named one of the “Top Latino Powerhouses in Hollywood Under 40” by The Hollywood Reporter. However, despite these impressive accomplishments, her story of her rise to fame is nothing but inspiring.

At the age of six, Cruz had what she calls her “moment of clarity” in which she realized that she wanted to become a singer and actress.  She urged the audience to acknowledge their own dreams, “Saying it is the first step to making it a reality.”

However, in her rise to fame, Cruz experienced a series of setbacks that caused her to question her dream, including a near-fatal car accident and no father figure. While we’re all familiar with the cliched inspirational quotes, Cruz is a true poster child for the value of hard work: “If you put in the work, opportunities will come to you. But you have to be willing to catch them,” claims Cruz.

In her late teens, Cruz moved to Miami, where she fell into bankruptcy with her producer, and subsequently took an opportunity to go to New York to pursue her music career.  She joked, “If you’re gonna make it in this business, you have to be crazy and stupid.”

Crazy and stupid, however, Cruz is not.  In New York, she released her first EP, and also found inspiration for the character of Flaca in a coworker at a nightclub. “There was a real Flaca out there!” said Cruz.  ”I told her, ‘I’m gonna play you on TV one day.’” Funny enough, Cruz’s premonitions held true.

Inspiring as Cruz’s story was, her candid question-answer session is what truly won over the audience. As she ended her story, Cruz admitted to the audience that public speaking is one of her greatest fears; in fact, she failed speech class in college. Ten minutes later, at the request of an audience member, she belted out a Mary J. Blige cover with no musical accompaniment and nailed every note.

McKenna Sokol ‘16 of Westerville, Ohio admits, “Honestly she wasn’t the best public speaker, but it was interesting because so many people watch that show, and her story was really inspiring because she had a hard life and she was dressed to the nines!”

Cruz also took the time to answer the burning questions of every die-hard Orange fan.  As Cruz acted out her favorite scenes and revealed the funniest cast members, she expressed obvious pride and excitement for the show. “I’m still in a dream,” she said

As her talk concluded, the stage was soon crowded with audience members desperate to meet and take photos with Cruz.

Cruz is what comes to mind when you think of a truly genuine star; candid and hilarious, yet simultaneously vulnerable.  For a group of college students in the midst of figuring out their lives, Cruz stands as a testament for the power of hard work and believing in your dreams.

Everything you need to know before watching The Oscars