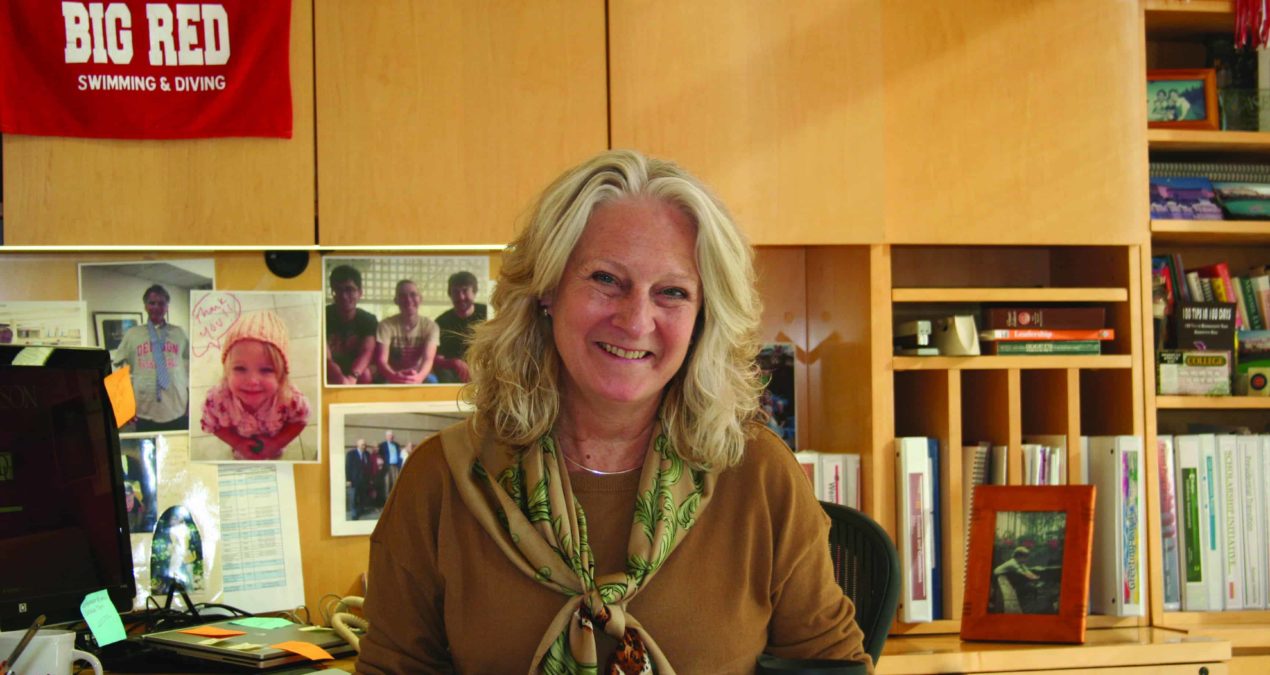 What do Alumni Relations, the Annual Fund and University Communications all have in common? They fall under the purview of one person: the Vice President of Institutional Advancement, Julie Houpt ’75. Houpt’s office sits in the west wing of the fifth floor of Burton-Morgan, overlooking North Quad. When she’s ready to start our interview, she’s beaming, having just left a meeting in the conference room down the hall.

“On a typical day she has 8-10 meetings,” says Betsy Russo, Houpt’s assistant since 2006. Houpt is at a new point in her 13-year tenure as VP of Institutional Advancement. She explained that with the arrival of new President Adam Weinberg, priorities in her office have shifted. Houpt’s position has two prongs: on one hand, she is responsible for the communications and image of Denison, overseeing University Communications, which churns out the Denison Magazine, The DEN, the university’s website and press relations. Houpt’s other role (and, arguably, the more important) role is raising money for Denison to literally help the institution advance.

Between 2002 and 2008, Houpt worked with former President Dale T. Knobel on the Higher Ground Campaign, raising $177 million for the college by the end of the six-year period. According to Houpt, the campaign was more facilities-oriented: “We built all of this,” she said, gesturing outside her office window, “Burton-Morgan, the campus commons, Talbot and the Bryant Arts Center.” Today, explained Houpt, the college’s strategic plans for advancement include “significant investment in the endowment” for financial aid and faculty support, new performing arts facilities, a major renovation project for Whisler Health Center and major investments in Career Exploration & Development.

None of this will be cheap.

“It’s going to be a lot of money,” said Houpt. “Our job in the advancement office is to raise that money.”

One of the people that will be helping her is Ned Huneke, Assistant Director of the Annual Fund, which raised $5.3 million alone last year. “She’s got a lot of great energy, she’s obviously articulate,” he said. “She’s easy to work for.”

Houpt’s Denison journey started long before she assumed her current position in 2001; it started in the fall of 1971 with her freshman year here.  Houpt grew up outside of Chicago in Wilmette, Ill. and attended the still-significant Denison feeder school New Trier High School. “I [visited] Denison on one of those beautiful fall days,” Houpt said fondly. “When I visited, I saw people who I thought were the kind of people I wanted to be friends with.”

Houpt majored in art history after taking a course to fulfill a G.E. at the insistence of her advisor. “I was just going to take music,” said Houpt, who has a high school background in musicals and choir. “Seeing art through history […] fascinated me,” Houpt said, grinning. In addition to art history, Houpt fell in love with literature after a class with a professor that “opened [her] eyes to contemporary fiction.” Today she’s in a monthly faculty/staff book club, and depends on her books for her five-day-a-month travel schedule.

When Houpt agreed to be VP of institutional advancement, she says that being an alumnus both helped and challenged her. “I couldn’t assume that I already knew everything about Denison,” she explained, “I really needed to learn Denison today, to understand how the college has progressed and where it wanted to go.”

Houpt’s resume reads a bit like a liberal arts transcript. After graduating from Denison, she got her M.A. in Museum Education at the University of Minnesota. “I loved working with young people in the galleries and watching the light bulb go off in their head when they saw something in a painting that spoke to them,” Houpt recalled. By 1980, though, Houpt was enrolled in law school at the University of Southern California. She “loved” the legal education, saying that she found it “challenging, interesting and exciting.”

But in the early eighties, Houpt points out that law school was pretty homogenous. “It was overwhelmingly white men,” she says, “and I don’t even think a third of our class was female.” When she exited USC with her law degree in tow, Houpt moved on to 80-hour weeks at a law firm. While Houpt liked being a litigator, she says, “I realized that for me to find satisfaction in my career, I had to care about what I was doing.”

Houpt moved on to higher education, inspired by her mother-in-law who worked in college development. Houpt was a major gift officer at Stanford and a fundraiser at the University of Pennsylvania and Friends Central School, a Quaker prep school in Wynnewood, Pa. When Houpt started as VP of Institutional Advancement, it was the year before the wildly successful Higher Ground campaign. At this time, the largest campaign Houpt had managed raised $7 million.

She had no idea that in just a few years she would be celebrating Denison’s largest fundraising haul in history.  “I felt great, because I had been a part of helping Denison achieve its aspirations, and helping to ensure that we could continue to provide financial aid to some remarkable young people.”